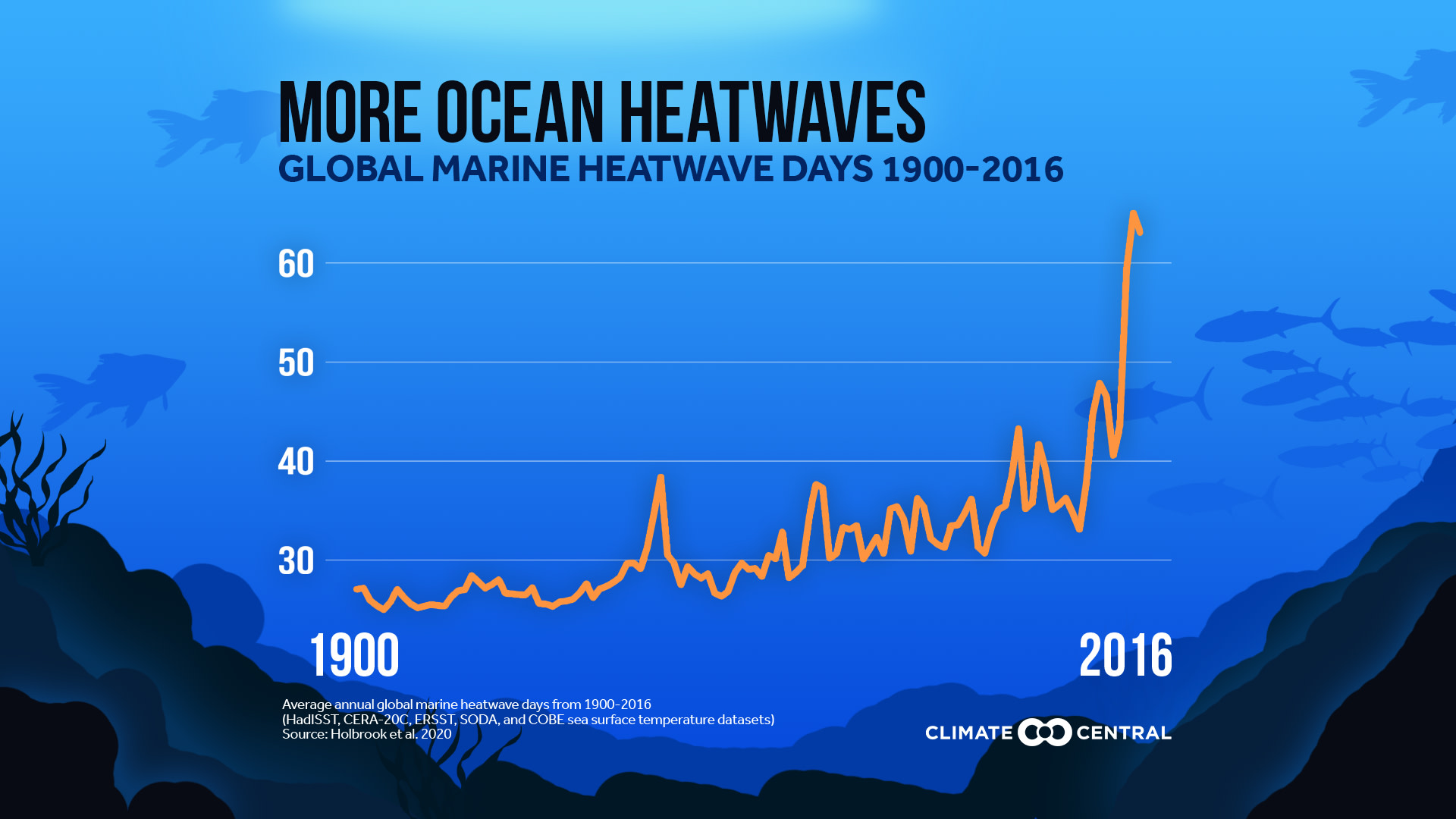 The world’s oceans are heating up. Sea surface temperatures have risen by 2.3°F (1.3°C) in the last 100 years, with more than 90 percent of the planetary warming between 1971-2010 occurring in the ocean. This warming has increased the likelihood of marine heatwaves (MHW). A relatively new area of study, MHWs when ocean water temperatures are much warmer than normal (usually above the 90th percentile of their climatological distribution) for at least five consecutive days. Successive heatwaves with gaps of two days or less are considered part of the same event.

Scientists measure ocean temperatures with satellites, buoys, research vessels, and a range of other temperature-sensing instruments, including a fleet of more than 3,000 robotic floats that measure ocean temperature around the world. The Southern Ocean Carbon and Climate Observations and Modeling (SOCCOM) project is an important driver in using floats and data in understanding marine ecosystems.

Warm ocean waters strengthen tropical storms and hurricanes, and this year’s ocean temperatures are fueling one of the most active starts to a hurricane season on record. In early August, NOAA updated its hurricane season outlook, projecting 19-25 named storms, of which 7-11 will become hurricanes.

Marine heatwaves can persist for weeks to years and can vary greatly in size, ranging from a small bay along a coastline, to tens of thousands of square miles across an open ocean. You may recall “the Blob,” a mass of warm water that developed in the Pacific Ocean in 2013, ultimately stretching from Alaska to Mexico. The longest MHW event on record, it was 4.5°F (2.5°C) warmer than average for 226 days, creating toxic algal blooms, devastating marine wildlife, and disrupting the Pacific fishing industry.

Research has shown that environmental extremes may have stronger impacts on ecosystems and species than slow changes in average conditions over longer time periods, both on land and in marine environments. Documented impacts of marine heatwaves include:

With MHWs projected to become more intense, frequent, and longer in duration in the coming decades,
scientists are working to be able to forecast and predict their development. This would help stakeholders, including fishery managers and those in the fishing industry to work together to anticipate and mitigate potential impacts on marine species.

Where are marine heatwaves happening? The Marine Heatwaves International Working Group’s website has a tracking tool that maps current and past marine heatwaves and provides details on their category (moderate to extreme).

Want to know the status of a local fishery? Or look up a species such as the minke whale or the Elkhorn coral? You can get to know what’s happening to marine species in your area through a searchable database on NOAA’s Fisheries website. There are also links to science and data resources and publications.

The SciLine service, 500 Women Scientists or the press offices of local universities may be able to connect you with local scientists who have expertise on marine ecosystems. NOAA has regional fisheries offices and the National Association of Marine Laboratories has a map and listing of labs around the country.