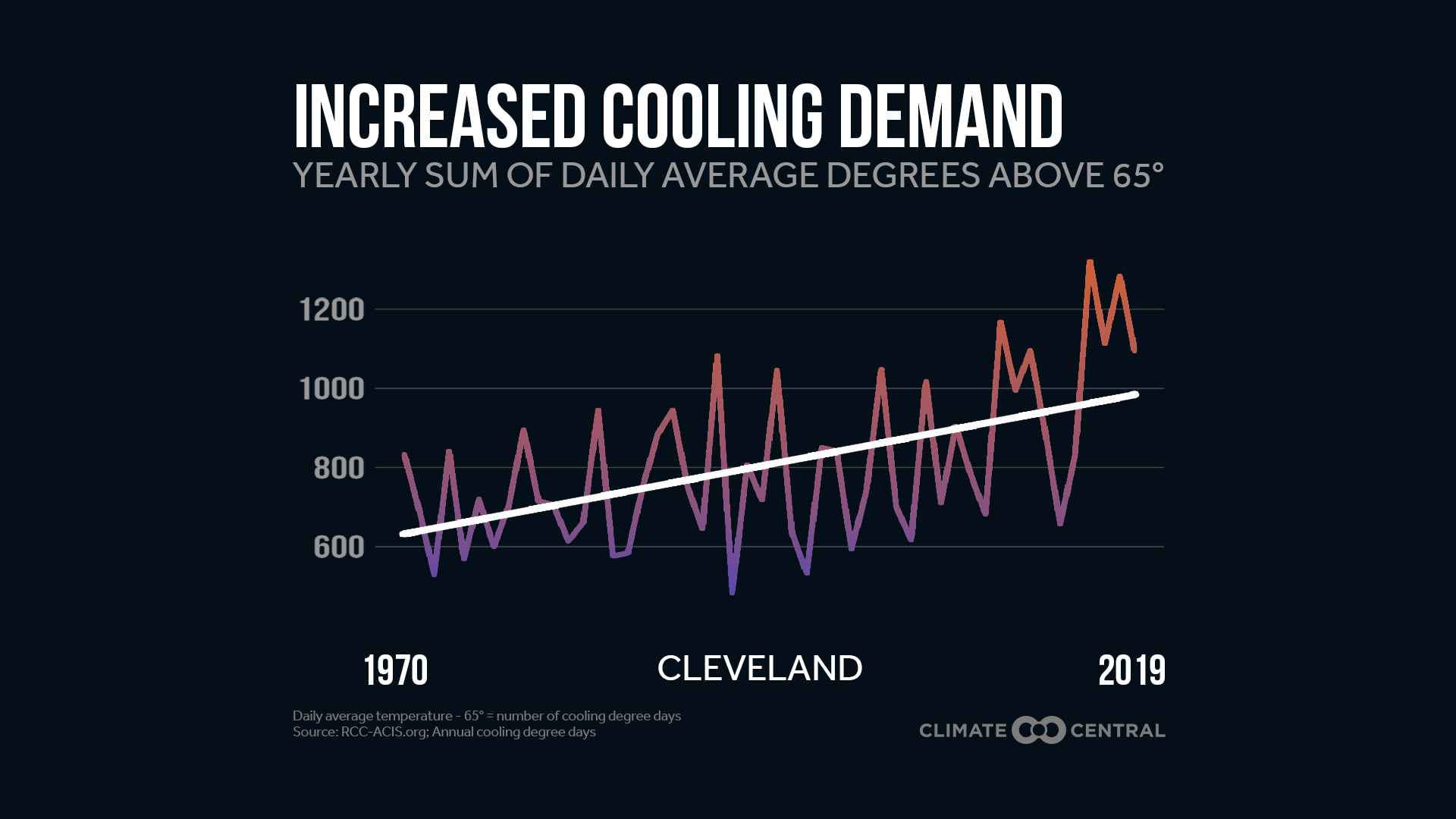 Hotter days and warmer nights are causing more Americans to head inside and turn on their air conditioning. Plus, rising populations and incomes in developing countries mean more air conditioner units are being installed globally, so our need to stay cool is setting us up to continue to increase the planet's temperature even further.

Cooling degree days (CDD) are a relative measure of how high the temperature was on a given day or during a period of days, and are not actually days at all. They are calculated by subtracting a standard temperature of 65°F, which is considered a comfortable temperature, from the daily average outdoor temperature (averaged from the high and low temperature) recorded at a given location. For example, a day with an average temperature of 90°F (very common in summertime Phoenix) has 25 CDDs. A high number of degree days generally results in higher levels of energy use for cooling buildings and homes.

Climate Central analyzed 242 cities in the U.S. and found that 96 percent are experiencing more CDDs since the 1970s. Some of the cities seeing the largest jumps are not much of a surprise: McAllen, Texas, Las Vegas, and Phoenix rank in the top three and all have increases of more than 1,000 CDDs. It’s important to note that an increase in cooling days is a result of an increase in the number of days above 65, an increase in the number of degrees above 65, or both—and you can have more CDDs than there are days in the year. Climate Central’s analysis showed that 61% (148) cities around the country saw increases of over 200 CDDs since the 1970s, including many places in northern latitudes, such as Syracuse, NY, Portland, Ore., and Minneapolis.

Air conditioning allows us to work, learn, and be productive, keeps our food and medical supplies safe, and reduces the risk of heat-related illnesses, but it comes at a cost.

Demand for air conditioning is expected to increase in the U.S., with the Energy Information Administration (EIA) projecting that energy use for cooling will grow 37% by 2050, faster than any other energy use in residential and commercial buildings. Air conditioning consumption is expected to increase by 59% in U.S. homes by 2050, outpacing the 17% growth projected for commercial spaces. Recent research examined how humidity also plays an important role, and considering air temperature alone is likely underestimating the energy demand for cooling.

The warming climate is increasingly creating a financial burden for low-income households and communities of color, who often live in energy-inefficient homes that are more expensive to keep cool. Energy costs can be a significant financial burden, especially in low-income households who have been most affected by the COVID-19 pandemic and economic recession. The American Council for an Energy-Efficient Economy (ACEEE) reports that energy efficiency investments can help create jobs, reduce greenhouse gas emissions, and save money for consumers and businesses.

How is heat and humidity changing in your area?

See how extreme heat index days have trended locally, in Climate Central’s 2019 report on heat and sports. For projections, check out this comprehensive map tool from the Union of Concerned Scientists.

Check out the EPA’s Partner Database for Incentives and Joint Marketing Exchange (DIME) or enter your zip code, select the "Room Air Conditioner" box, and click the "locate special offers/rebates" button to find a room air conditioner recycling program in your area.

How costly is air conditioning near me?

The EIA estimates that air conditioning accounts for 12% of homeowners’ energy bills on average in the U.S., but these can vary greatly by region. EIA publishes the average monthly price of electricity for businesses and residents in all states here.

The SciLine service, 500 Women Scientists or the press offices of local universities may be able to connect you with local scientists who have expertise on changing air quality in your area. The American Association of State Climatologists is a professional scientific organization composed of all 50 state climatologists.

Data was gathered via the Applied Climate Information System. Cooling degree days were calculated using the sum of the daily cooling degree days each year. Change in the number of days is based on linear regression. Climate Central's local analyses include 244 stations. However, for data summaries based on linear trends, only 242 stations are included due to large data gaps in St. Johnsbury, Vermont and Wheeling, West Virginia.