A satellite that sat in mothballs for a decade is now on track for a 2015 launch, NASA announced on September 10. Called the Deep Space Climate Observatory (DSCOVR), the satellite will monitor the Sun continuously, looking for signs of solar storms that could disrupt communications on Earth in an effect known as “space weather.”

At the same time, DSCOVR will watch the sunlit side of the Earth to measure changes in albedo — that is, how much sunlight is reflected from our planet — a key factor in how much the Earth will warm as heat-trapping greenhouse gases build up in the atmosphere. 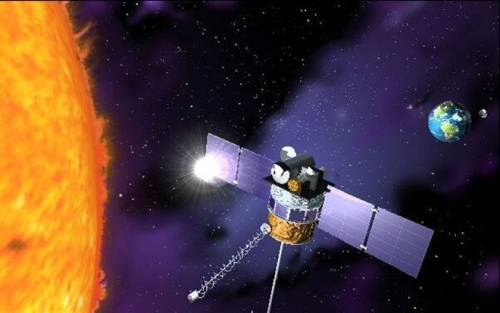 DSCOVR was originally proposed by Vice President Al Gore in 1998 for the exclusive purpose of keeping tabs on Earth. He named it “Triana,” for Ridrigo de Triana, the member of Christopher Columbus’s crew who first caught sight of the New World. Triana would sit at the so-called L1 Lagrangian point, a million miles from Earth and directly between our planet and the Sun.

At L1, the gravity of Earth and Sun are almost perfectly balanced, allowing the satellite to sit there almost indefinitely. L1 would also give Triana a permanently sunlit view of Earth, so it could monitor changes in albedo as ice and clouds and vegetation waxed and waned. Scientists already know that summer melting of Arctic sea ice, for example, has led to a disturbingly rapid downward trend of ice-covered area over the past three decades, allowing more of the Sun’s energy to warm the darker, less reflective ocean underneath and boosting the effects of global warming.

Clouds, by contrast, might help counteract global warming, because evaporation of water from lakes, rivers and oceans would increase in a warming world. Clouds’ white tops could make Earth more reflective and help cool the planet, and while there’s no strong evidence that this is happening, a satellite like Triana could show if it were.

In addition to calling for a scientific mission, Gore also wanted live video of Earth as seen by Triana to be broadcast nonstop over the Internet, as a reminder of the beauty and fragility of our home world.

In 2001, however, the Bush administration canceled the project, and the already-built satellite was put in storage at the Goddard Space Flight Center in Maryland. But in 2011, the Obama White House renamed the mission DSCOVR, repurposed it mission to focus mostly on solar activity, and moved it from NASA to NOAA, the National Oceanic and Atmospheric Administration.

“This acquisition will allow NOAA to continue to receive vital data to help anticipate and mitigate space weather damage, which could potentially result in costs to the United States of $1 to $2 trillion,” Jane Lubchenco, then-NOAA administrator, said in a statement.

If all goes according to schedule, DSCOVR will go into space early in 2015 aboard a SpaceX Falcon 9 launch vehicle.