What You Need to Know About Zika And Climate Change

The rapid rise of the Zika virus is turning into a full-on public health crisis. The virus, transferred via specific types of mosquitoes, “is now spreading explosively” across Latin America, according to Margaret Chan, the head of the World Health Organization (WHO).

There could be up to 4 million cases right now, just eight months after the first case was reported in Brazil. There are 23 countries where the virus is active.

A number of factors have had to line up for the Zika virus — a disease that’s been associated with birth defects — to spread so far and wide so quickly, but chief among them is heavy rain and heat. Climate change could play a future role in this virus’ — as well as other mosquito-borne illnesses — spread as it creates conditions more favorable to the mosquitoes that transmit it.

Heavy rain and warm temperatures have helped the mosquitoes carrying Zika thrive. There have been heavy rains in southern Brazil and Uruguay this winter (and really for much of the year). Those rains can translate to standing water on the ground, which is crucial mosquito breeding habitat. El Niño has a strong influence on that region and it’s likely playing a role in increased risk of the Zika virus there.

The outbreak initially started in the northeast of the country, however, which usually dries out during El Niño (this year has been no exception). It might seem counterintuitive but drought is also prime time for mosquitoes. There's a notable link between an uptick in dengue fever — another disease transmitted by mosquitoes that transmit Zika — and drought because of how people store water in the region.

Then there's the heat.

Temperatures have been above normal for much of Latin America as a whole since early last year, which was also the warmest on record for the world. El Niño has helped warm things up, but climate change is directly responsible for all of last year’s record heat globally.

That heat is in some ways a more important ingredient driving the Zika virus outbreak. It not only means mosquitoes can incubate the virus, but also that people are also more likely to be outside and have exposed skin for mosquitoes to feast on.

Research on other viruses can tell us what climate change could mean for Zika. Until now, the Zika virus has been a relatively little-studied disease (though that’s about to change). There’s not really a lot known about it, let alone how climate change could influence its spread in the future. However, there are other diseases that are comparable that provide a rough sketch of what lies ahead.

“The literature on dengue fever and climate change is instructive,” Amy Vittor, a doctor who studies mosquito-borne diseases at the University of Florida, said. “Dengue uses the same mosquito vector. If you have an increase in temperatures, you may see an increase in range of mosquitoes and the spread of virus. However, in some areas where vector is thriving, you might have a decrease because it gets too warm.”

A 2013 study showed that West Nile virus season in the U.S. could become longer as temperatures warm. It also showed, however, that warming could cook mosquitoes out of some of their current range.

Vittor said another factor in some mosquito-borne diseases is relative humidity and that future changes in it are currently unaccounted for in most climate models.

A switch to La Niña conditions next year could help the virus spread further. Models indicate that the current El Niño could be done by summer and the odds favor it being replaced by La Niña.

That wouldn’t be the end of the Zika virus, though. In fact, a La Niña could help the virus spread to other parts of Latin America and the Caribbean. 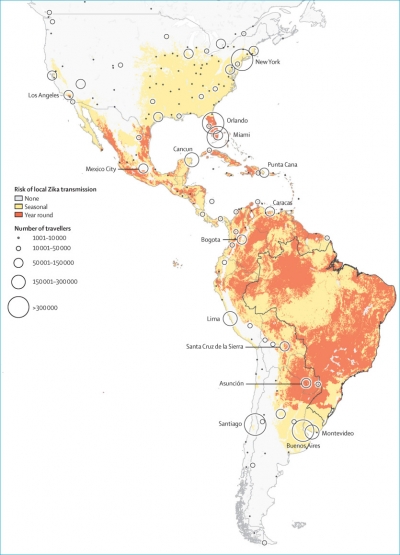 “Historically, La Niña periods in the Caribbean during the summer months is a dengue time bomb,” Teddy Allen, a postdoctoral researcher at the International Research Institute for Climate and Society, said. “The same could be said about Zika since it is transmitted by the same aedes aegypti mosquito.”

In winter, La Niña tips the odds in favor of wetter than normal conditions in northeast Brazil, which could help the virus continue to get a foothold there as well. Vittor said it’s also possible that the virus could evolve and get picked up by other mosquitoes.

“What we learned with chikungunya is it underwent a slight mutation that made it very transmittable to the Asian tiger mosquito,” she said. That helped spread it rapidly across Latin America in 2014. More than 895,000 cases were reported that year.

“Right now we’re not sure whats going on with Zika and mutations. The situation is not static, and any mutations may change the way we view things,” she said.

It’s all but a given that it will find its way into the U.S. An international team of researchers published a paper earlier this month that indicates Zika could spread as far north as New York, where it could be transmitted seasonally, based on the mosquitoes that carry it and travel to and from areas already affected by the virus. It could become a permanent fixture in Florida as well.

You May Also Like:
Coal Slides to New Low As Source of Electricity
Climate Matters: Cold Nights on the Decline
Wildfires Are Burning Some of the World’s Oldest Trees
Warming Waters Linked to Northeast Seagrass Die-offs