The Fuel You Use For Heating Depends on Where You Live

With the U.S. on the cusp of the winter home-heating season, what fuel do you use to heat your home?

The answer to that question depends a lot on where you live, and it has implications on your carbon footprint, too. 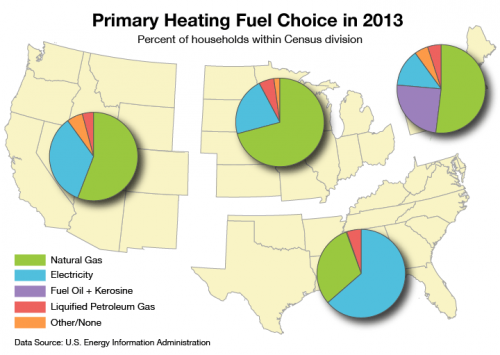 About 48 percent of all U.S. homes use natural gas for heating, while electricity is used in 37 percent, U.S. Census Bureau data show. About 14 percent use other fuels.

The climate implications of the fuels used for heating could be significant, especially at a time when the electric power sector is beginning a long transition away from coal and toward natural gas as the Obama administration develops policies aiming to reduce CO2 emissions from electric power plants.

Climate policy currently in development favors the use of natural gas to overtake coal as the dominant source of electricity in the U.S., but recent studies have shown that the climate benefits of switching from to natural gas from coal to produce electricity are far from proven.

Today, natural gas piped directly into homes is the dominant source of heating fuel in every region but the South, where more than 60 percent of households used electricity in 2013. The South is also the region that has seen the greatest shift away from coal and toward natural gas for electric power generation.

The Midwest sees the greatest use of natural gas for heating, with more than 65 percent of homes there using gas.

But natural gas use for heating is declining. Every region in the U.S. except for the Northeast is seeing a slight drop in favor of electricity, according to an EIA report released Thursday.

More people may be using electricity for heating instead of natural gas because they may be moving into newer homes that use electricity, and use it more efficiently than older electrically heated homes, according to the EIA.

More than 30 percent of all households in the Northeast used heating oil in 2005. That number dropped to less than 25 percent in 2013. Heating oil stocks have become tight in recent years with several Northeastern states, including New York, requiring heating oil to be marketed with lower sulfur levels.