Windstorm Xaver brought powerful winds and an intense storm surge from Scotland to Denmark, but it appears storm barriers and preparedness helped most locations weather the brunt of the storm. 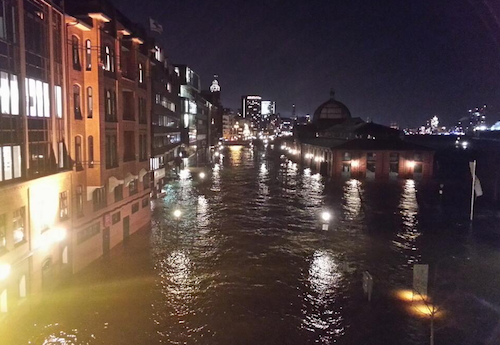 Some of the first impacts of Xaver were fierce winds that raked across the Scottish Highlands. There, wind gusts were recorded up to 142 mph according to data collected by Alex Lamers, a National Weather Service meteorologist in Tallahassee, Fla. The lowlands in the U.K. and mainland Europe were spared from gusts that strong, but winds there still packed a punch. A large area along the coast from the Netherlands to Denmark saw gusts up to 81 mph with one location on the Danish-German border peaking at 98 mph.

The strong winds downed countless trees and at least one life-size Tyrannosaurus Rex statue. In the U.K., the Guardian reports that more than 100,000 properties are experiencing power outages while more than 400,000 homes are without power in Poland. Xaver’s winds also helped Germany meet it’s 2020 goals for clean energy, though only for a few hours. The Sydney Morning Herald reported that wind turbines spun fast enough to supply 39 percent of the country’s power needs as of 11 p.m. local time.

I plotted up some wind gusts with the European storm. Event not totally over yet, still windy on Polish coast. #Xaver pic.twitter.com/uFralXS1M7

Storm surge was also a major concern for Xaver. Early reports indicate that in parts of the U.K., the storm tide during Xaver was above those seen during a devastating storm in 1953. The tide also washed away 7 homes in Norfolk, flooded businesses in Boston, and left erosion scars all along the country’s east coast. The west coast wasn't spared either, with notable flooding outside of Liverpool.

Aftermath of last nights storm surge, next one on the way #brightlingsea #stormsurge #flood #pictures pic.twitter.com/wOb4JqvUyE

Forecasts had the storm bringing up to 11.5 feet of water to coastal ports in Germany on top of an astronomical high tide overnight on Thursday into early Friday morning.

In Bremerhaven, the surge arrived at low tide, keeping the storm tide just below 10 feet. Hamburg saw a higher tide, with water rising 12.1 feet above the average high tide mark according to Weather Underground’s Jeff Masters. That’s 1.1 feet below the all-time record, set during a powerful storm that hit in January 1976.

Some parts of Hamburg flooded, but overall the city weathered the storm with no injuries or loss of life reported. The city closed all 38 of its flood gates, which was the main reason the storm’s impact was dampened. Those gates protect nearly $14 billion in commodities according to research from the Helmholtz-Zentrum Geesthacht Center for Materials and Coastal Research.

In the future, coastal cities could face $60 billion in losses annually due to flooding as sea levels rise. Hamburg’s flood infrastructure is designed to anticipate storms on top of a 11.8 inches of sea level rise. However, new plans are being implemented to insulate the city even further from flooding, and the plans have been considered as a model for New York and other coastal cities in the face of rising seas.

The main part of the storm is now moving inland, but high tides will continue through the next two days, posing a risk of continued flooding.