As negotiators at the latest global climate meeting gather this week in Lima, Peru, to hammer out a new international agreement to limit emissions of the greenhouse gases fueling global warming, they are receiving a stark reminder of that warming. 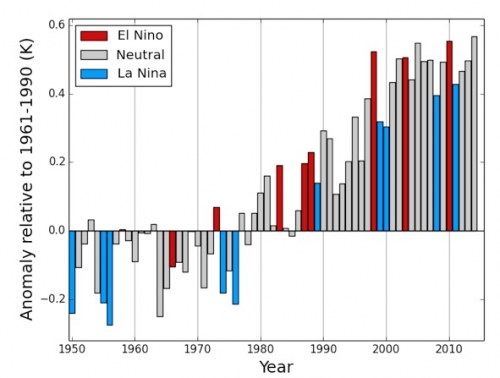 Global annual average temperature anomalies (relative to the 1961-1990 average) for 1950-2013, based on an average of the three data sets from NASA, NOAA and the U.K. Met Office. The January-to-October average is shown for 2014. The colouring of the bars indicates whether a year was classified as an El Niño year (red), an ENSO neutral year (grey) or a La Niña year (blue).
Click image to enlarge. Credit: WMO

With less than a month to go, 2014 is in the running to become the warmest year on record, the World Meteorological Organization told delegates to the 20th session of the Conference of the Parties to the U.N. Framework Convention on Climate Change on Wednesday. The statement from the U.N. agency is based on data gathered by NASA, the U.K. Met Office, and the U.S. National Oceanic and Atmospheric Administration, which already announced last month that the year was likely to be the hottest year on record.

The year’s warmth is due in large part to record-high ocean temperatures that have also led to a record-high global average sea level, the WMO said. The bulk of the extra heat trapped by carbon dioxide and other greenhouse gases is absorbed by the planet’s oceans.

“What we saw in 2014 is consistent with what we expect from a changing climate,” WMO Secretary-General Michel Jarraud said in a statement. “Record-breaking heat combined with torrential rainfall and floods destroyed livelihoods and ruined lives. What is particularly unusual and alarming this year are the high temperatures of vast areas of the ocean surface, including in the Northern Hemisphere,” he said.

“Record-high greenhouse gas emissions and associated atmospheric concentrations are committing the planet to a much more uncertain and inhospitable future,” Jarraud said.

August, September and October of 2014 were all the warmest such months on record, according to data from NASA, NOAA and the Japan Meteorological Agency. Through October, the temperature for the year-to-date was 1.22°F above the 20th century average of 57.4°F, according to NOAA data released in November. The WMO, combining NASA, NOAA and Met Office data found that the year was 1.03°F above the 1961-1990 average of 57.2°F. (Different agencies handle the temperature data slightly differently, leading to small offsets in exact numbers and rankings.)

The likelihood that 2014 will be at least among the warmest years, if not taking the top spot, underscores the long-term warming trend, WMO officials said.

“The provisional information for 2014 means that 14 of the 15 warmest years on record have all occurred in the 21st century,” Jarraud said. The one exception is 1998, which saw a massive El Niño event that drove up global temperatures. 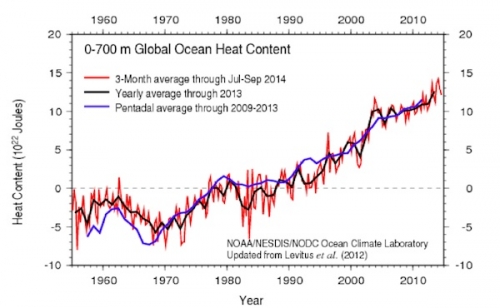 A struggling El Niño event has raised tropical Pacific Ocean temperatures this year, but has failed to elicit the typical response from the atmosphere. Many of the ocean areas that have been most anomalously warm have also been outside of the typical El Niño zone. The global oceans measured 0.8°F above the 1961-1990 average, and from January to June that record ocean heat extended down to depths of about 2,300 and 6,500 feet, the WMO said.

“2010 and 1998 were exceptionally warm because of the additional factor of the strongest-ever occurring El Niño events,” Omar Baddour, of the WMO’s World Climate Data & Monitoring Programme, wrote in an email. So seeing 2014 possibly exceed those years — even if only by a few hundredths of a degree — with at most a weak El Niño “suggests that we're seeing even more clearly the long-term signal,” he said.

When the NOAA announcement was made last month, climate scientist Gavin Schmidt, head of NASA’s Goddard Institute for Space Studies that keeps NASA’s temperature records, said that the differences in temperature between 2014, 2010 and 2005 were small enough that they “are all going to be statistically good candidates for the warmest year,” but that regardless of which year comes out on top, “it’s the long-term trend that really matters.”

Another sign of that longer trend is the fact that the last time a year set a global cold record was in 1909 (then tied in 1911), according to a Climate Central analysis of NOAA data. The chances of ever seeing another coldest year on record are vanishingly small.

The WMO has aimed its statement, which also provides an overview of extreme weather events around the world, at the Lima delegates to inform their deliberations, the agency said.

“We hope the delegates make use of the scientific facts that we provided in the statement” along with the findings of the Intergovernmental Panel on Climate Change reports, Baddour, who coordinated the statement, wrote. “Ignoring the alarming signals contained in the IPCC reports and the annual facts in the WMO statements is rather highly damaging to the planet and its citizens.”

You May Also Like:
What’s At Stake in Lima Climate Talks
Clues Show How Green Electricity May Be in 2050
Climate Investments ‘Falling Short’ of 2°C Goal
Report Maps Out Decarbonization Plan for U.S.
Here’s How the U.S. Can Adapt to Climate Change