For most states in the U.S., winters without snow would be like a Super Bowl performance without Beyonce, Donald Trump without a combover or an overseas flight without a passport. 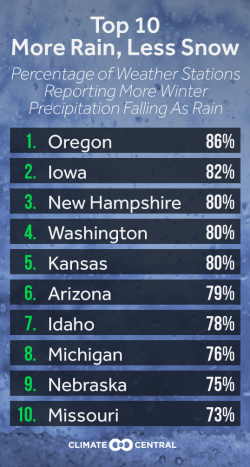 To see how winter precipitation is changing, we looked at states that all see notable amounts of snow (sorry, Florida). Our analysis included 2,121 weather stations and looked at days with precipitation from the months that typically see at least 1 inch of snow so we could get a full sense of not just winter, but the snowy shoulder seasons as well. In some places, this snowy season spanned October through April, while in others it only ranged December to February.  (full methodology below)

Oregon saw the biggest drop with 86 percent of its stations reporting a decline (it's neighbor to the north, Washington, had the fourth-biggest drop). Iowa and New Hampshire round out the top three with 82 and 80 percent of their stations reporting more increasing snowy season rain, respectively. Some states in the top 10, like Arizona, aren't snowy all over in winter, but those weather stations in the state’s mountainous regions are almost all seeing less snow now than several decades ago.

Last winter’s “wet drought” in the Pacific Northwest is a prime example of this phenomenon. The region was only slightly drier than average, but much of the precipitation that did fall came as rain thanks to the second-mildest November to April on record. The impacts from that and more rain on snow in general are multifaceted and frankly, none of them are very good.

More rain is a bummer for ski resorts and the people who love them. In the Pacific Northwest, there was an immediate impact to the region with a handful of ski resorts having a curtailed season or never opening at all. 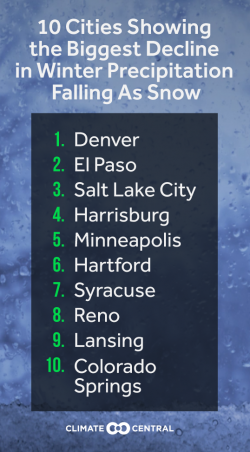 That’s because there’s no easy fix for rain falling instead of snow. In fact, one of the biggest issues for resorts is if rain falls on snow already on the ground.

“If you get a rain on snow event or just get less snow in general, it’s hard to attract more skiers,” Elizabeth Burakowski, a postdoctoral researcher at the National Center for Atmospheric Research, said. “No amount of grooming can make a rainy day go away.”

A rainy winter is an even bigger issue in the eastern U.S., which relies heavily on early season snow for the Christmas rush of recreational skiers. It can wipe away snowpack or melt the manmade snow that resorts stockpile on cold nights.

“Twenty percent of skier visits in the East come during Christmas and New Years. If you have rain in early winter, you’re going to see a dip in skier visits,” Burakowski said.

In addition to New Hampshire, the Northeast’s other two main skiing resort strongholds of Maine and Vermont have had 58 and 62 percent, respectively, of the weather stations in this analysis reporting a drop winter precipitation falling as snow.

Reservoirs are also ill-equipped for winter runoff. While the impacts of rain on ski slopes are a major concern, it’s more worrisome about what less snow means for water supplies out West. The series of reservoirs, dams and other systems in place to provide water in the West during the dry summer have been built for spring runoff when snow usually melts. More rain falling in winter changes the nature of the game, though.

If rain falls on snow, it’s like opening the gates of a dam. It raises the potential for floods and creates a pattern of runoff some reservoirs aren’t built to handle.

Gregg Garfin, a climate expert at the University of Arizona, said that the big, deep reservoirs like Lake Mead can deal with the runoff without too much of an issue. But smaller, shallower reservoirs aren’t designed to handle winter runoff in large doses.

Some parts of the West don’t use reservoirs. Instead they rely on the natural trickle of spring and summer runoff and taking water out of rivers as it comes down the mountain. More rain than snow can mean there’s simply less water in the rivers when it’s needed.

“Some basins don't have built storage and rely entirely on snowmelt,” Kathie Dello, deputy director of the Oregon Climate Service, said. “ Since we get most of our precipitation from October to May, we really need the melting snow in the dry summer months to keep streamflows at acceptable levels for fish, water supply, recreation.”

Dello has seen the effects of this changing landscape first-hand. Oregon has the sixth-biggest increase in stations reporting more winter rain. Sixty-seven percent of stations in our analysis have reported a crossover.

California, a state with a $54 billion agricultural industry that relies heavily on spring runoff and reservoirs, has seen 62 percent of its stations report a decrease in winter snow. 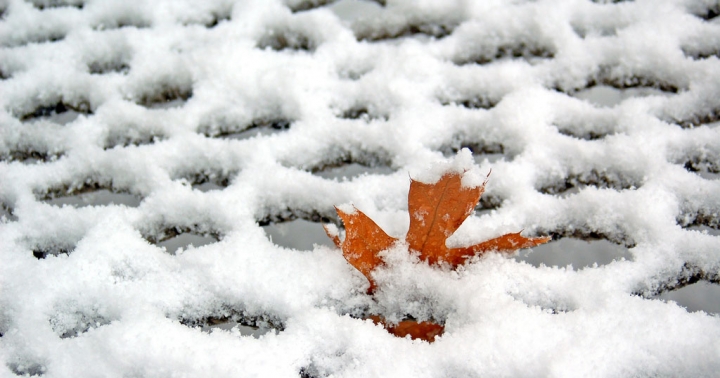 “If we start losing precipitation that normally falls as snow and hangs out in mountains until we need it, that puts us in a bit of a pickle in terms of water supply for irrigation,” John Abatzoglou, a climate expert at the University of Idaho, said.

Large wildfires have become more common. The U.S. just set a record for wildfire acreage burned last season. For the first time, the nation saw more than 10 million acres charred by wildfires, including some of the worst in California’s history.

Beyond a single year, every state in the western U.S. has seen an increase in large wildfires. That includes Idaho, where large fires now burn 45 times more acres than they did in 1970. The wildfire season is also more than two months longer than it used to be. One of the biggest drivers in this trend is disappearing spring snowpack, which is tied to a mix of rising temperatures and more rain melting it earlier than usual.

“Snow typically hangs around and melts and provides that moisture source into even July,” Abatzoglou said. “When we don’t have snow, that sets us up for a longer fire seasons.”

“It’s much easier to heat a small body of water than a roaring cold stream,” Abatzoglou said.

In places like Idaho, which have a lot of topographical variety, it’s possible that fish have enough vertical real estate to move to higher — and cooler — elevation streams. But for mountains with less vertical relief like the Sierra Nevada in California, there’s less range for fish and other species to climb.

With temperatures continuing to rise, this issue isn’t going away. As the climate warms, more rain than snow in winter will become the new reality.

Adapting to some impacts will be near impossible. More rain and rising temperatures could cut ski seasons in half, for example.

For other impacts, adaptation will be the name of the game, something that’s already happening for some people.

Abatzoglou said during last year’s wet drought, some Idaho farmers bumped up their planting schedule 3-4 weeks to take advantage of the early runoff, “which is good because we were low on water when crops are typically in need of it.” 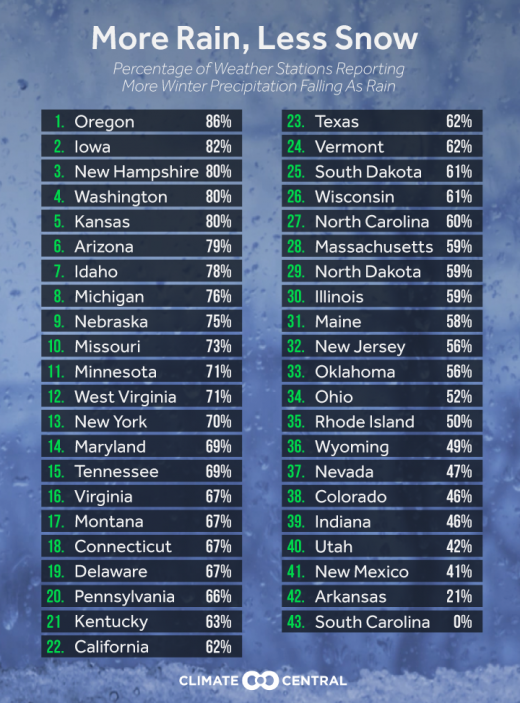 To determine which months to include for each station’s snowfall season, we collected precipitation data for each station since 1949, including the amount of snowfall per month each year. If there were more than 10 occurrences of any month (i.e. 10 Decembers) with more than 1 inch of snow, that month was included in the station’s analysis. In an effort to exclude very rare events, stations that had fewer than 3 months that met the above criterion were dropped from the analysis.