Winter Drought Forecast for Much of U.S.

While the weather catchphrase of recent winters was the shiver-inducing polar vortex, the buzzword for this winter in the U.S. will be drought.

Significant droughts are already in place over nearly 45 percent of the contiguous U.S., with hotspots in California — where the drought is in its sixth year — the Southeast and Northeast. With the renewed possibility of a La Niña emerging in the next couple months, little improvement is expected in most areas; the drought in the Southeast is expected to expand and drought could also emerge in the Southern Plains, according to the most recent seasonal forecasts from the National Oceanic and Atmospheric Administration. 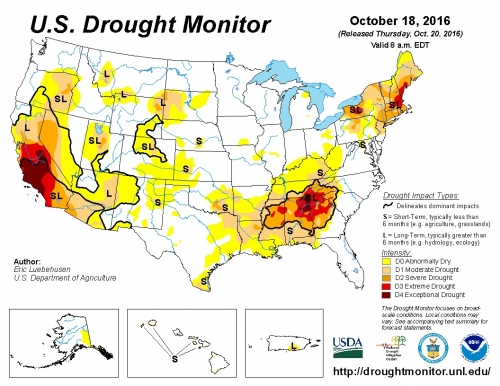 “The winter forecast doesn’t bode well for [California] and many other areas around the nation currently experiencing drought,” Mike Halpert, deputy director of NOAA’s Climate Prediction Center, said during a press teleconference.

La Niña is the opposite end of the natural climate seesaw from El Niño; it is characterized by cooler-than-normal ocean waters in the tropical Pacific, while El Niño features warmer-than-normal.

After an exceptionally strong El Niño, conditions in that area of the Pacific have cooled, moving into neutral territory and now “hovering near the La Niña threshold,” Halpert said.

While an El Niño tends to bring wetter, cooler weather to the southern tier of the U.S., La Niña has an opposite effect, bringing drier and warmer weather to the same region. It is still uncertain whether a La Niña will actually materialize, and if it does, it is likely to be a weak one, but with the outlook trending in that direction, the forecast for already drought-stricken areas is for more of the same.

California had hoped that the strong El Niño would bring more drought relief than it did. An above-average winter wet season was needed to make a significant dent in the drought, but the year ended around normal. The bulk of the precipitation fell in the northern part of the state, unusual for a winter with an El Niño. While that led to some improvement there, central and Southern California remain mired in the worst categories of drought.

The same happened with recent storms that dumped significant rains on the Pacific Northwest and parts of Northern California.

For Southern California, the main period for precipitation is December through February, “and if they don’t get that rain in those months, they’re in trouble,” David Miskus, a NOAA drought forecaster, said.

Right now the signal isn’t strong either way, leaving equal chances for above, below, or normal precipitation this winter.

“As [the El Niño-La Niña cycle] isn’t a good predictor of hydrologic outcomes in California, our message this year is to be prepared for any outcome,” state climatologist Michael Anderson said. 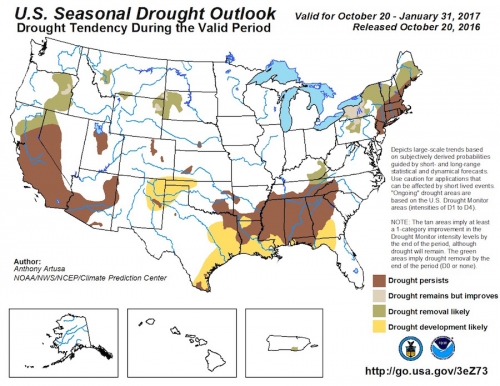 Where drought is expected to persist, develop, improve and worsen across the U.S. through the end of January 2017.
Click image to enlarge. Credit: NOAA CPC

In the future, more droughts like this could be in store for the state as recent research has suggested that some of the ocean and atmospheric conditions that helped usher in and deepen the drought could become more common in a warming world.

While out West there is a firm wet season that provides the only opportunity for drought relief, in the eastern U.S., precipitation is much more evenly distributed throughout the year.

But in the Southeast, conditions have been dry and warm since spring, allowing drought to flourish. The epicenter is northern Georgia and Alabama, southeastern Tennessee and the western Carolinas.

The Atlantic coast of the Southeast is fairing much better because of rains dropped by Hurricanes Hermine and Matthew. In some areas of eastern North and South Carolina, Matthew dumped 1-in-1,000 year rains, according to the National Weather Service.

“You go from flooding in one end of the state to pretty bad drought in the west,” Miskus said.

With the La Niña signal and a winter forecast of warmer and drier weather, the drought is expected to deepen and expand westward and toward the Gulf Coast.

If these areas don’t see rains over the next few months, “they’re going to be really be hurting,” Miskus said. 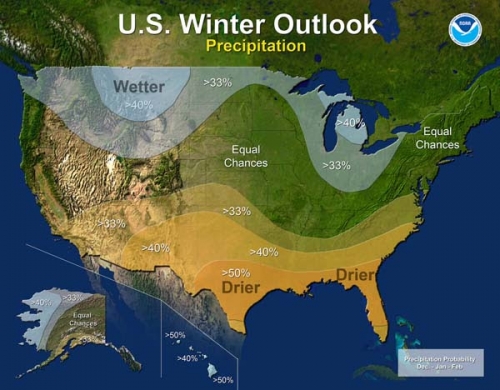 Drought could also develop in the Southern Plains, where it is already encroaching, which could result in a broad area of drought from Texas to the Carolinas. The plains only recently emerged from a deep drought that was one of the worst on record in the region.

According to the National Climate Assessment, drought is likely to become more common in the southern reaches of the U.S. in general as global temperatures continue to rise.

One benefit to winter, though, is that “at least the heat won’t be there” to further exacerbate the dry conditions by fueling more evaporation, Miskus said.

The outlook for the Northeast is more mixed. The winter looks to be cooler and wetter across parts of the northern tier of the contiguous U.S., which is expected to help ease drought conditions in the western part of the region. A weather system is dumping rain on the area on Friday, which will help conditions somewhat, Miskus said.

The key in the Northeast is for rains to fall before the ground freezes and the water can’t soak in, he said.

Right now drought is expected to persist in coastal areas, though “all you need is one or two nor’easters” to wipe it out, Miskus said. The climate signals just aren’t there to say whether that is likely.

You May Also Like:
The Climate Questions the Next President Should Answer
U.S. Energy Shakeup Continues as Solar Capacity Triples
This is What It’s Like To Be a Young Climate Scientist
Hottest Months on Record Have Something in Common