If it seems like the ubiquitous spaghetti strands of electric power transmission lines are more and more common these days, it’s not your imagination. They’re growing everywhere.

Texas, for example, has just finished installing 3,600 miles of transmission lines to serve its vast wind farms in the Texas Panhandle and the western part of the state. 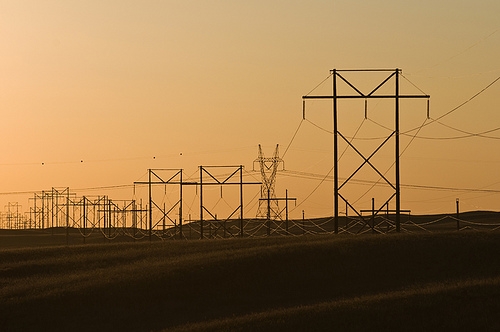 Many of the new transmission lines are serving wind farms and solar power plants built in the past decade, providing a route for renewable energy to get onto the power grid.

Wind and solar power, in addition to population shifts in cities in the West and South, are helping to drive major new investment in electric power transmission lines in the U.S., according to a new U.S. Energy Information Administration report.

After a three-decade decline, the U.S. saw a fivefold increase in investments in electric power transmission lines between 1997 and 2012, the report says. Investments increased to $14.1 billion by 2012 from $2.7 billion in 1997.

Renewables such as wind and solar are being developed partly as climate-friendly alternatives to coal-fired power plants, which are among the most significant emitters of carbon dioxide into the atmosphere.

Wind farms have spread across the country over the past decade, driven in large part by states’ renewable energy portfolio standards while also taking advantage of a renewable energy production tax credit, which expired in 2012.

All the new wind farms in the U.S. required new transmission lines mainly because most of the solar and wind farms exist far from where people use the electricity generated there, according to the EIA.

Chris Namovicz, EIA team leader for renewable electricity analysis, said the EIA had insufficient data available that could project whether investment in new transmission lines would continue increasing, especially as it pertains to renewables. 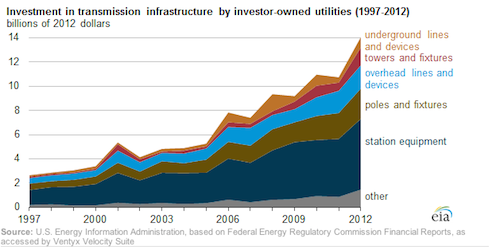 Namovicz said it remains to be seen whether new transmission lines built for renewables in Texas and other states are sufficient to accommodate expanding wind farms and the demand for wind power.

Other factors have also driven the spike in transmission line investments over the past two decades.

The EIA reports that the demand for electricity has shifted geographically because of urban growth in previously undeveloped areas since the mid-1990s, primarily in the South and West. Even though the overall electricity demand in the U.S. has not been growing, large numbers of people moving into growing areas have required new power transmission lines.

The price tag of the investments have also increased because the cost of steel and concrete for new transmission lines have been on the rise in recent years while utilities upgraded and replaced older infrastructure.