In 2012, when the High Park Fire tore through a northern Colorado forest replete with dead trees left in the wake of a mountain pine beetle infestation, blame for the fire’s spread across 87,000 acres was often placed primarily on the beetles.

The High Park Fire, which killed one person and destroyed 259 homes, and the attention to the beetles in its wake were part of the impetus for a new University of Colorado study showing that bark beetle infestations and the dead trees they leave behind have almost no effect on the amount of land burned in U.S. wildfires each year. 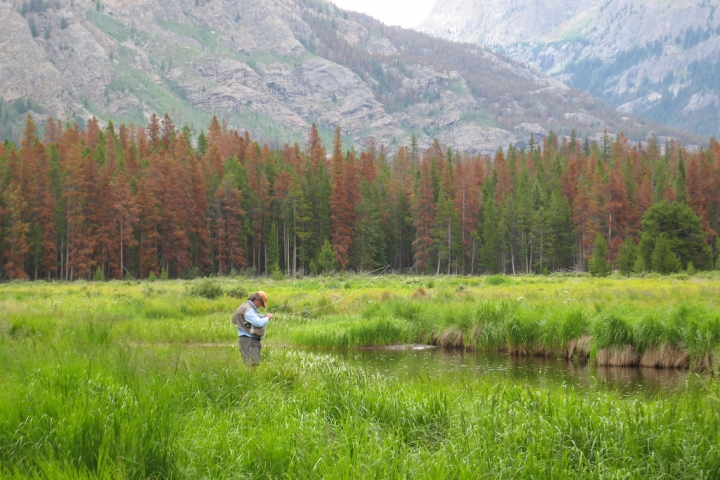 A forest full of dead trees killed by the mountain pine beetle in the West. More than 4 million acres across the region have been affected by bark beetles since 1996. Credit: Tim Wilson/flickr

Instead, the biggest factors influencing wildfire spread in the West are drought, possibly influenced by climate change, higher temperatures, and topography. That’s according to the study, which was published in the Proceedings of the National Academy of Sciences.

Climate change is expected to increase the frequency and scale of wildfires as temperatures warm in the coming decades. On average, wildfires burn more than twice the acreage they did 40 years ago, while the annual number of wildfires over 1,000 acres has doubled from 50 during an average year in the 1970s to more than 100 each year since 2002, Climate Central research shows.

At the same time, the U.S. Forest Service estimates that more than 4 million acres of forests in the West have been hit by bark beetle outbreaks since 1996, themselves by-products of climate change and drought.

“There is pretty convincing evidence that in our subalpine forests across the West, drought is driving when we’re having wildfire,” the study’s lead author, University of Colorado-Boulder postdoctoral researcher Sarah Hart, said.

By superimposing maps of public lands showing both wildfire activity and forests infested with mountain pine beetles, Hart’s team studied the land area affected by both during years of recent high fire activity in the 11 Western states. The researchers found that drought was the most significant factor driving the area of land that burned in wildfires during those years.

Previous research has shown that stands of dead trees killed by bark beetles can have an effect on wildfire behavior, but that effect depends on the severity of “fire weather,” and the level of the bark beetle outbreak, but may have little connection to the actual land area burned in a wildfire.

During extreme fire weather in the West, vegetation is likely dry enough to fuel explosive burning regardless whether pine beetles have killed the trees in the path of the fire, according to the study.

The work by Hart’s team builds upon other research published in the past decade showing that bark beetle outbreaks, which may be caused in part by drought, have little effect on wildfire activity in the West. 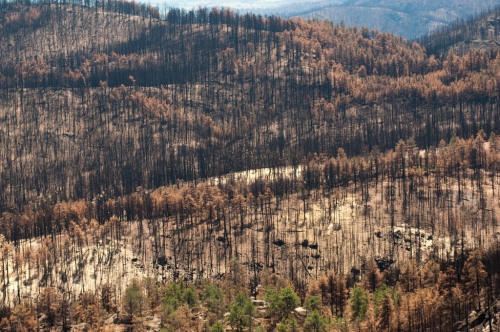 Part of the 2012 High Park Fire burn area in Larimer County, Colo., an area of subalpine forest that had been infested by the mountain pine beetle. Credit: USDA/flicker

Jeffrey Hicke, an associate professor of geography at the University of Idaho who co-authored previous research showing little connection between bark beetle infestations and wildfire, said the new study did not directly analyze the role of climate change in wildfire or discuss how beetles affect specific fire behavior.

“In my opinion, this study did not address whether a beetle-affected stand has a higher probability of burning compared to a live stand,” Hicke said via email. “What the study did show is that beetle outbreaks are not a big effect on area burned, and that suggest that other factors are more important (vegetation type/quantity, topography, climate weather), which isn’t surprising.”

It can be difficult for scientists to tease out recent effects of climate change on wildfire because forest management practices have changed in different ways across the West in recent decades, he said.

However, scientists have a good understanding of the impact climate change can have on fuel moistures, length of burning season, and other factors affecting how forests burn, so continued climate change is expected to increase the land area burned in catastrophic wildfire, Hicke said.

“There is an incredibly strong consensus amongst many forest ecologists that it’s really drought driven by climate change events that is the key driving factor for these fire events,” Colorado State University wildlife ecologist Barry Noon, who was a co-author of a 2012 study showing higher temperatures are driving both wildfires and the spread of bark beetles, said.

The new study is consistent with much of the previous research pointing to drought as the driving force behind catastrophic wildfire.

“When we have warm and dry conditions, fuels dry out enough that we have widespread fire regardless that we have mountain pine beetle-kill in the forest,” Hart said.