Sap a forest of rain — say, for three or four years — toss in seemingly endless sunshine and high temperatures, and you’ve got just the right recipe for some catastrophic wildfires.

Such is the story playing out in the West, where, thanks in part to climate change, drought-fueled infernos are incinerating forests at a record pace from Alaska to California, claiming the lives of 13 firefighters, destroying more than 900 structures and requiring firefighting agencies to call in help from the U.S. Army and as far away as Australia and New Zealand. 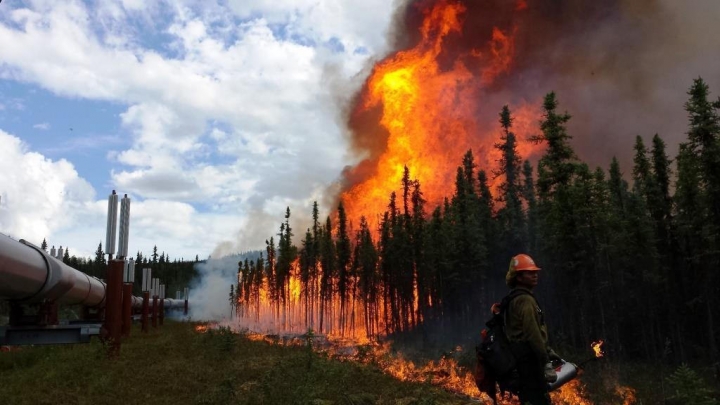 The Aggie Creek fire burns along the Trans-Alaska Pipeline in June.
Credit: USDA/flickr

Here’s the breakdown: As of Aug. 20, more than 41,300 wildfires have scorched more than 7.2 million acres in 2015, mostly in the Pacific Northwest and Alaska. That’s nearly three times the 2.6 million acres that burned nationwide in 2014 and more land area than has burned in any other year over the last decade.

The blazes have consumed so much land this year because of the drought, fueled by record high temperatures during the warmest January-to-July period in history for the region. Partly to blame for the heat is a giant area of warm water in the Pacific known as “the blob” and the rapidly growing El Niño, which could be one of the most extreme on record.

The drought and high temperatures are stressing forests to the point where they can’t fend off the worst effects of wildfire, even in those forests that depend on occasional fires to survive.

The short-term outlook for wildfires in the West over the next few days calls for continued extreme dry, windy weather — a recipe for continued wildfire spread.

“We’re looking at the winds and the dry, lower humidities, dry weather,” Boehle said. Some areas of the Cascades that are burning could see winds gusting to 50 mph through Saturday, she said.

The bottom line, she said: “Not much improvement.”

These are five of the largest wildfires burning the West as of Friday morning: 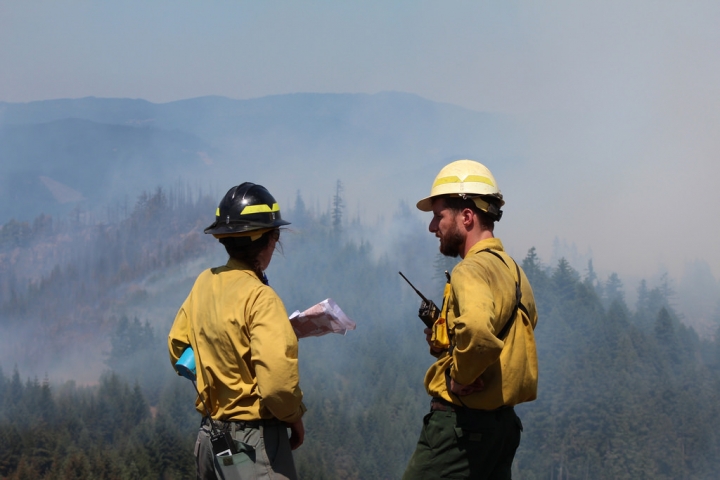 Boehle said the onset of fall in Alaska has begun to help knock down fires burning since July west of Fairbanks, but not before they became the country’s largest wildfires so far. Worse, they’re burning in area unaccustomed to giant catastrophic wildfires. The fires were caused by lightning and are burning in a sparsely-populated region of Alaska. All firefighters have been pulled off the blaze as wildfire activity has declined.

More than 480 firefighters are working on this lightning-caused and wind-driven blaze burning mostly on sparsely-populated public grasslands and forests in eastern Oregon northwest of Boise, Idaho. The fire is 75 percent contained.

Burning like a “hellstorm” in Okanogan County in north-central Washington, this lightning-caused inferno forced the evacuation of the town of Tonasket on Thursday and killed three firefighters who were battling Twisp River blaze. The Twisp River Fire was considered a separate wildfire until it combined with other blazes to form the Okanogan Complex Fire. The fire, which is being fought by more than 700 firefighters, is 38 percent contained, but erratic winds and dry weather are increasing the chance of its spread.

More than 280 firefighters are battling this human-caused blaze burning on the Colville Indian Reservation in Washington. The fire threatens more than 700 structures. Low humidities and erratic winds were expected to fuel its continued spread.

More than 1,200 residents have been evacuated as nearly 1,000 firefighters battle this series of large wildfires burning near Lake Chelan in north-central Washington. The blaze has destroyed nearly 85 structures, and extreme heat and dry weather make it likely that the fire will continue to spread. So far, it is about 35 percent contained.