With 51 large wildfires currently burning across the U.S., the nation’s firefighters have been placed on a war footing — known as “National Preparedness Level 5.” It's the first time that step has been taken since 2008, according to Wildfire Today, and it reflects the combination of high fire activity, the large amounts of firefighting resources already committed to wildfires, and the expectation for more fires to erupt in the coming days as hot, dry weather continues across the West.

According to the National Interagency Fire Center (NIFC) in Boise, Idaho, lightning strikes in California and Montana have led to several new large fires in recent days, with more thunderstorm activity expected.

According to a statement on the NIFC website, smokejumpers, “hotshot crews,” air tankers and helicopters are all in short supply, although that is not unusual when wildfires are this active. “Fire managers have a high level of expertise in balancing needs and resources,” the NIFC statement said. “They are working diligently to best allocate the available resources and make progress on the most difficult fires.”

The active fires are burning about 730,000 acres across the country, with the greatest concentration of large fires in California, Idaho, and Montana. In Idaho, nine active wildfire complexes have charred more than 280,000 acres, with just one fire listed as 100 percent contained. 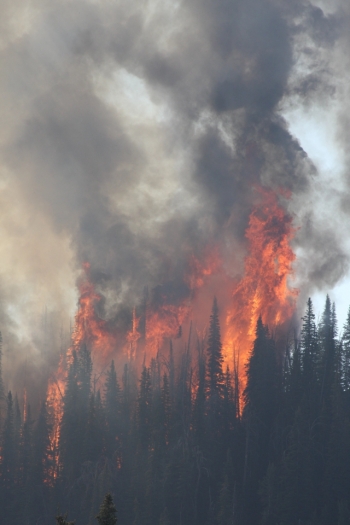 Smoke from the Western fires has led to hazardous air quality throughout the region, with winds taking the smoke eastward, over the Central states as well.

The wildfires are burning in states that have been hard hit by drought, with drought conditions extending from New Mexico to Oregon. California has had its driest year-to-date on record, while Idaho, Nevada, and Oregon have had one of their top-10 driest years to date.

This year has been marked by particularly devastating blazes. Colorado saw its most damaging wildfire in its history, which killed two people and destroyed more than 500 buildings. And in Arizona, 19 members of an elite firefighting unit were killed when they were overtaken by flames near the town of Yarnell on July 31.

The ongoing fires may be stretching already thin firefighting resources, but the number of wildfires isn't unusual, at least in the context of the past decade. So far this year, there have been about 32,000 wildfires in the U.S., according to NIFC data, with 3.4 million acres burned. That compares to a 10-year average of 53,000 fires by this point in the year, with about 5.4 million acres burned. Last year, which was a particularly brutal wildfire season, nearly 6.9 million acres had already burned by this point in the year.

Those statistics won’t come as consolation to the residents affected by the current spate of fires, nor do they tell the bigger picture story, which is of a steadily worsening wildfire regime in the West.

Hidden within the context of year-to-year variability is the clear long-term trend toward more large fires in the West. There are more large fires (greater than 10,000 acres) burning now than at any time in the past 40 years, and the total area burned each year has also increased.

And, in fact, the top eight worst wildfire years since 1960, in terms of acres burned, have all occurred since 2000, according to NIFC data. 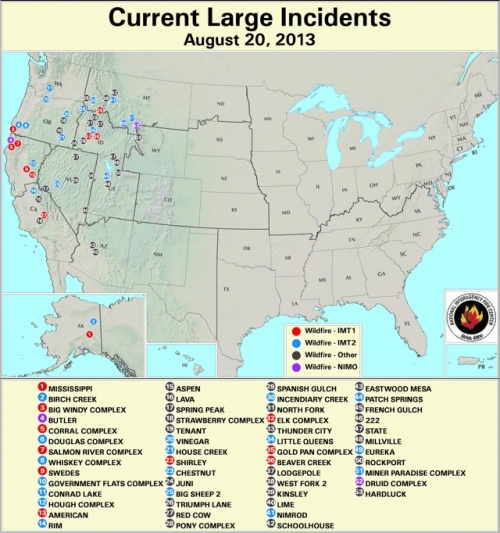 Map showing the active wildfires across the U.S. as of August 20.
Credit: NOAA/NIFC.

Many factors are involved in creating conditions that are primed for large wildfires. Decades of fire suppression strategies have left large tracts of forest with excess fuel to burn. Increased human development near traditionally fire-prone ecosystems has contributed to an uptick in damaging fires, and natural climate and weather variability plays a large role as well.

Climate studies show that over the long term, climate change is escalating wildfire risk in the West. According to Climate Central research, in some states, such as Idaho and Arizona, the number of large fires burning on U.S. Forest Service land each year has tripled or even quadrupled since the early 1970s. In other states, such as California and Wyoming, the number of large fires has doubled.

Idaho has seen the biggest increase in large wildfires since 1970 than any other western state. Year-to-year there is still a lot of variability, but in the past decade, several years with above-average temperatures and low spring snowpack have led to dozens of large wildfires on federal land.

Researchers predict that the area burned in the West may quadruple for every additional 1.8°F of average surface temperature rise. That is particularly ominous, since according to the most recent climate model projections contained in the draft U.S. National Climate Assessment, average temperatures could rise between 2°F and 4°F across most of the U.S. within the next few decades, and by as much as 8°F by 2100.