Week after week, the drabs of good news have been as rare as the rain. And that won’t change anytime soon. California is in the midst of a crushing severe multi-year drought brought on by cumulative winters with a dearth of replenishing rains and snows and an ever-growing population. Climate patterns may be in the early stages of aligning to quench the state’s thirst, but if that happens — and there are no guarantees — it won’t happen until after the dry season ends, a long six months or more to wait until dwindling reservoirs are replenished. 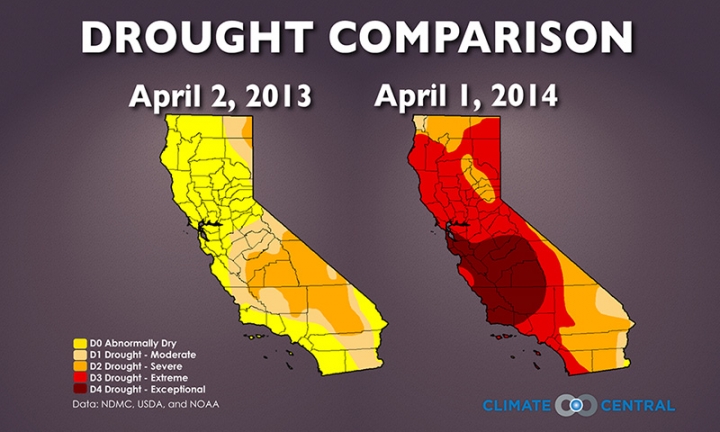 Nearly the entire Golden State – 99.81 percent to be exact — is in the grip of drought, according to the latest update from the U.S. Drought Monitor. Nearly 70 percent of the state is suffering from an “extreme” or “exceptional” drought, the two highest categories on the Monitor’s rating scale. The snowpack across the entire state is at a measly 35 percent of its normal level, according to figures released Monday, and water systems and residents are feeling the strain.

The drought has been building in California for the past three years, though it reached its worst point after this winter wet season failed to live up to its name. At this point last year, only a quarter of the state was in drought conditions; now, that much of the state is in exceptional drought alone — marking the first time the Monitor has used that rating in California since it’s inception in 1999, said one of the Monitor’s authors, Mark Svoboda, a climatologist with the National Drought Mitigation Center (NDMC) at the University of Nebraska-Lincoln.

“Things are not trending in the right direction,” Svoboda told Climate Central.

The intensification of the drought comes from a combination of circumstances — namely, a lack of precipitation and a large population — that won’t change over the next few months, as the state enters its dry season and braces for water shortages and what is expected to be an intense wildfire season.

Despite considerable conservation efforts on the part of the state government, and the cooperation of residents, “this is going to be a rough year,” Svoboda said.

It will take multiple years to recover from the drought, Svoboda and other experts said — groundwater that took several years to deplete will take several years to build back up. There is hope that this year will mark the low point, and that a possibly developing El Niño pattern will bring a wet winter next year. The jury is still out, however, on the connection between an El Niño and the precipitation California sees, though residents have little else to look forward to.

And while this particular drought is likely the work of natural variability and not directly attributable to climate change, according to drought and climate expert Richard Seager of Columbia University’s Lamont-Doherty Earth Observatory, climate change is expected to be an important factor in the development of drought around the world in the coming century, as precipitation patterns across the globe are altered and a warmer atmosphere saps more moisture from the soil.

Unlike tornadoes or flash floods, drought is a disaster that doesn’t strike suddenly. It is a “creeping phenomenon,” in the words of the NDMC, that slowly and insidiously builds as rain and snow fails to fall and the water in reserves is consumed.

The build-up to the current drought began in 2012, which saw a below-average water year, according to records of water allocations from California’s State Water Program, and were reduced accordingly. Still, California’s reservoirs are built to factor in drought years, and the impact was relatively limited.

“They had a pretty good water supply going into last winter,” Svoboda said.

2013 was even worse and was the driest on record in portions of the state. Some cities had rain deficits of 30 to 40 inches. When the heat of the dry season came, demand for water soared and reservoir levels were significantly drawn down.

Despite a few late-season storms this winter, the situation has played out much the same, with areas once again running major precipitation deficits and water levels at reservoirs around the state ranging from about 20 to 50 percent of capacity — troubling numbers at the tail end of the wet season.

“Heavy rain and snow would have to fall throughout California every day for the remainder of April to reach average annual rain and snowfall levels, which is highly unlikely,” the state government’s weekly drought briefing said. “Even with such precipitation, California would remain in drought conditions, due to low water supplies in reservoirs from the two previous dry years.”

Because although those reservoirs were created with drought years in mind, California’s booming population — which rose by 4 million people from 2000 to 2010, when it reached more than 37 million — has eaten into that buffer.

“So it’s just adding up here; every year they have less and less,” said David Miskus, a senior meteorologist with the Climate Prediction Center at the National Oceanic and Atmospheric Administration.

The bigger pattern at play keeping the rain from reaching California has been a persistent weather pattern possibly influenced by large-scale climate patterns, such as the El Niño Southern Oscillation. While El Niños feature warmer-than-average tropical Pacific waters, its sister phenomenon, a La Niña, features colder-than-average waters. Neutral years are just as their name suggests, but can trend slightly in one direction or another. These changes in sea-surface temperatures alter oceanic and atmospheric circulation patterns, which impact the weather in places thousands of miles away.

From about June 2010 to May of 2012, a persistent La Niña was in place, which typically keeps California cooler and drier and could have helped prime the atmospheric setup that began the drought three years ago, Svoboda said. The neutral phase that followed and that lasted throughout this winter also behaved more like a La Niña.

Other scientists have singled out a pattern called the Pacific Decadal Oscillation, saying it may have influenced California’s winter, keeping high pressure ridges in place that sent storm system after storm system up toward Alaska and western Canada, giving them the rain and snow that the state so desperately needed.

The pattern broke somewhat in March, with rain and snow funneled in along so-called atmospheric rivers, streams of moisture-rich air that reach from the tropics across the Pacific to places like California. The added precipitation was welcome –  “they’ll take anything they can get,” Miskus said — but in the larger picture it has made only a dent.

It “hasn’t made up for the dryness in the first half of the winter,” Miskus said. 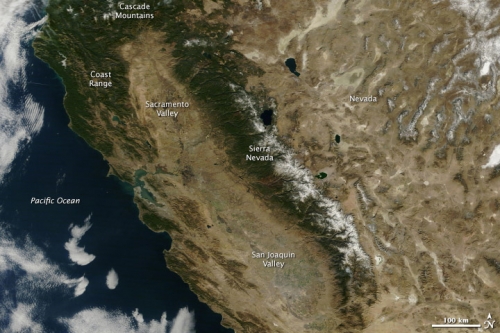 And in some ways, those late season storms were detrimental because rain, not snow, fell at some mountain elevations, which can cause the snowpack to melt more quickly instead of lasting into the summer and melting gradually.

“That’s not the ideal way to get recovery from drought in a state that really wants to bank their water,” Svoboda said.

And what little snowpack is there is at the mercy of spring’s warming temperatures. If they rise too quickly, the snowpack may disappear before the later part of the dry season when the meltwater will be most needed. (Warmer winter temperatures have also been detrimental to maintaining the meager snowpack.)

As April progresses, the wet season is coming to a close: The rains have likely shut off for the season, with perhaps only the odd monsoon-driven storm between now and next winter.

The short-term forecast puts temperatures across California at 10-20˚F above normal — not what water managers want to hear, as hotter temperatures increase water demand.

“If we could just get through this dry season, and hopefully it’s not too hot,” it would keep demand down, Svoboda said.

The numbers on the drought are not likely to change much through the dry season, Svoboda said, just as they have changed little over the past few weeks. Because rain is not expected to fall during this time, the deficit won’t grow, but the demands on the water system ensure that the impacts to the state will be significant, regardless of what percentage of the state is in various levels of drought.

“They’ll see impacts across all sectors,” Svoboda said, from firefighting efforts, to agriculture, to supplies of water to thirsty towns.

Digging Out of Drought

The prospects for pulling out of this drought are uncertain and entirely dependent on how next winter shapes up.

“We’re going to be looking to next winter as pivotal,” Svoboda said.

And the words on everyone lips in terms of next winter are “El Niño.”

“We’re just hoping that an El Niño develops” and is strong, Miskus said.

Previous years with strong El Niños — particularly those of 1982 and 1997 — saw extremely wet winters. But other strong El Niños have seen the opposite conditions, which could mean other climate patterns are muddying the waters, making any kind of prediction for next year difficult.

And even if an El Niño does develop and bring precipitation to California,  “I’m not going to blow the horn and say that recovery is on the way with El Niño,” Svoboda said. While it would certainly be a boost, one good winter won’t bring the system back to normal, just as one bad winter didn’t bring it to its current state.

“You’re not going to see a sudden rebound of these groundwater levels for a couple years now because we don’t have anything to replace it with,” Svoboda said.

What California faces in the future in a warming world is uncertain, depending on climate interactions that aren’t completely understood, as well as population trends.

California’s population growth makes them more susceptible to drought, Svoboda said, so it is something they’ll have to factor in in the future. Already some state lawmakers are calling for more reservoirs, while environmentalists are clamoring for stricter water usage rules.

Climate change stands to play a role, as well. Climate models currently project a slight drop in spring precipitation for California, though it is tiny compared to the shifts that have brought about the current drought, Seager said. But global warming also looks to shrink the winter wet season and make more precipitation fall as rain instead of snow, he said.

And even though this particular drought is likely the result of natural variations in the climate, an increase in average temperatures exerts a push on the water cycle by increasing water demand and ramping up evaporation that pulls water from the soil. So any added heat in the future could help tip an area into drought.

“The heat really plays a big role on how droughts behave,” Svoboda said. “It just saps the system that much more quickly.”