Climate change is a major threat to human health, with extreme heat likely to kill 27,000 Americans annually by 2100, according to a report released Monday by the White House.

The report, by the U.S. Global Change Research Program, outlines numerous ways global warming could devastate public health in the U.S. this century. 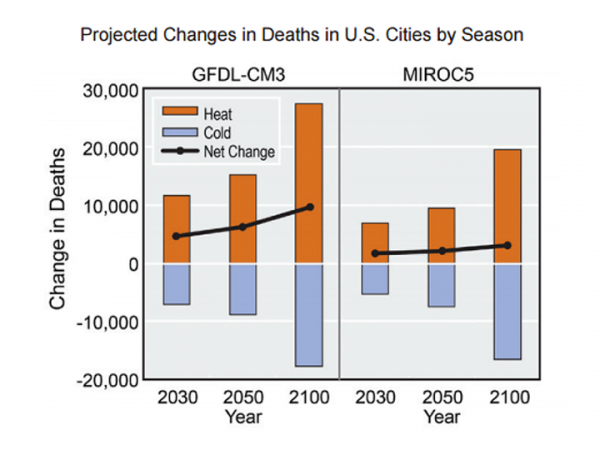 Global warming will lead to heat waves so extreme that in the hottest times of the year, it will be “physiologically impossible” for people who work outdoors to do their jobs, John Holdren, a science advisor to the Obama administration, said during a news conference about the report.

“People who work outdoors will be unable to control their body temperature and will die,” he said. “This is a really, really big deal.”

A 2015 Climate Central analysis of climate threats through 2050 for all 50 states, States at Risk, found heat to be the greatest threat of all, and the one for which most states, particularly high-risk states in the South, were poorly prepared.

Climate change will pose a major health threat to people of color, indigenous people and low-income communities, according to the report. It will lead to worsening air pollution, expose more people to waterborne illnesses, leave the American food supply vulnerable to a greater number of toxins and will potentially devastate the U.S. healthcare infrastructure as it becomes exposed to extreme weather.

By the end of the century, climate change will kill many tens of thousands of people every year in the U.S. because of disease and more extreme heat waves, tornadoes, hurricanes, floods, winds, lightning, cold snaps and winter storms, the report said.

“For the first time in history we’ve been able to show it’s not just about polar bears and melting ice caps, it’s about our families and about our future,” Gina McCarthy, the administrator of the Environmental Protection Agency administrator, said. “Every part of the U.S. is impacted now by climate and is going to be increasingly impacted if we do not take action now to reduce those impacts.”

The 332-page report, with contributions from hundreds of scientists from universities across the country, was released as part of the Obama administration’s Climate Action Plan. The plan aims to reduce the U.S. contribution to global warming by cutting greenhouse gas emissions by up to 28 percent by 2025. The U.S. is a party to the Paris climate agreement, which aims to keep global warming from exceeding 2°C (3.6°F).

Global warming is driven primarily by carbon dioxide and methane emissions from agriculture, deforestation, petroleum-based transportation and fossil fuel-fired electric power plants. As those greenhouse gas emissions continue to warm the globe, it is expected to lead to rising seas and more extreme weather, such as more frequent and intense heat waves, heavier rainfall, greater flooding, more wildfires and more severe hurricanes and tornado outbreaks in the U.S.

The report says climate change will threaten public health by increasing the severity and frequency of existing health problems and by posing unprecedented health problems — such as the spread of tick-borne diseases like Lyme disease — in places where they have never occurred before.

As temperatures warm, mosquito-born illnesses such as West Nile virus, malaria and dengue fever could also spread throughout the U.S., sickening and killing Americans in the process, the report said. Air quality is expected to decline because of increased ozone pollution and a greater number of severe wildfires, leading to worsened allergy and asthma conditions and deaths.

Poor water quality caused by climate change could also lead to the spread of disease, according to the report. Warmer temperatures will warm lakes and streams, contributing to blooms of toxic algae, while coastal flooding from rising seas and higher storm surge could overwhelm urban wastewater systems and expose residents to waterborne pathogens.

America’s food supply is vulnerable to toxins and diseases spread by warming temperatures, the report said. Higher sea surface temperatures will lead to more mercury in seafood while warming will lead to the wider spread of pathogens, pests and parasites in the food supply such as norovirus, listeria, salmonella, E. coli and others.

Increasing atmospheric carbon dioxide also reduces the concentrations of proteins and minerals in some plant species, reducing the nutritional value of wheat and rice, according to the report. Extreme weather could also severely damage America’s food distribution infrastructure, leaving people without access to nutritional food.

Daniel Dodgen, director of At-Risk, Behavioral Health and Community Resilience at the U.S. Dept. of Health and Human Services, said climate-related deaths and extreme weather could also lead to mental health problems as people lose homes, jobs, family and other loved ones to disease and weather extremes.

You May Also Like:
Waters Off New York Opened For Offshore Wind Farm