What To Know About February’s Satellite Temp Record

Global warming, it isn’t just for the surface. It’s also lurking in the atmosphere and new satellite data shows the incredible heat that’s building on the planet.

February marked the biggest atmospheric temperature spike observed, with the monthly reading running 1.5°F above normal, a new record. The measurement is taken by satellites operated by the National Oceanic and Atmospheric Administration (NOAA) and other agencies around the world. The record extends back to 1979 and is managed by scientists at the University of Alabama, Huntsville. 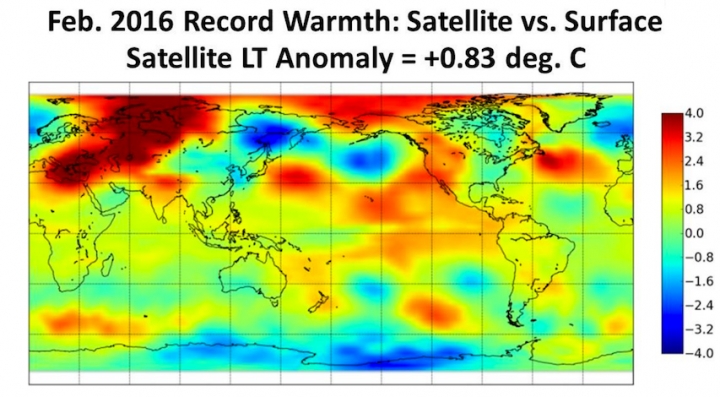 The satellite record has generally shown a slower rise in the planet’s temperature than surface measurements. That’s made it an oft-cited source by those who reject mainstream climate science and say global warming is no big deal. February’s big spike is being played up by some as a rebuttal of sorts to this notion.

But focusing on the spike (or using it as a battleground for that matter) misses the forest through the trees.

“All of this discussion is really about expectations for the future,” Gavin Schmidt, head of the NASA Goddard Institute for Space Studies, said.

El Niño is helping drive the spike — but global warming is evident in the background (and what really matters). Ah, El Niño. The climate phenomenon that has launched a thousand stories.

You can count this as story 1,001 because El Niño is one of the big drivers of all that heat in the atmosphere. Warming in the Pacific has released a ton of stored heat stashed in the ocean (heat driven in large part by global warming, by the way). Though El Niño peaked in November, there’s a lag in how long it takes all that heat to circulate in the atmosphere. This isn’t the first time this has happened, by the way.

“The spike is expected: look at 1997-98 El Niño,” Kevin Trenberth, a climate scientist at the National Center for Atmospheric Research, said. “So it is mostly related to the very strong El Niño that has been underway for over a year, and with an extra boost from global warming.”

Schmidt concurred, saying it’s “not really a big deal, but rather a validation of expectations that this El Niño would push the (satellite) data into record territory since there really is a trend.”

The February spike is drawing a lot of eyeballs, but this longer term trend is really what matters.

That said, satellites are also seeing blazing heat in the Arctic, similar to what surface measurements are showing. That’s certainly much more in line with climate change, which has seen the Arctic warm twice as fast as other regions of the globe. 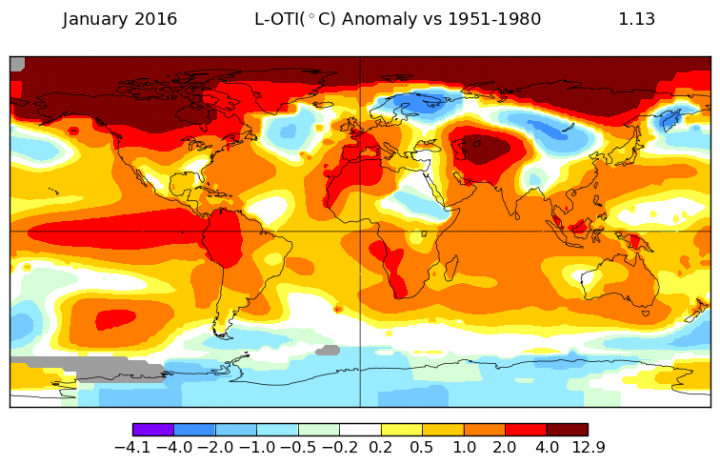 Perhaps more importantly, satellites measure the temperature in the atmosphere above us while we spend most of our time on the surface. Then there’s the reality that humans — and most other species on the planet — don’t live in the atmosphere (though it is a fine place to visit for short periods in the confines of a plane).

That’s why what’s happening on the surface is more important — from faster rising temperatures to all the other attendant impacts of climate change like sea level rise, dwindling sea ice and the like. Scientists at NASA, NOAA and other leading institutions are still analyzing the global surface data, but it seems pretty safe to say the Earth continued its record-blazing hot streak in February.

January marked the fourth month in a row of temperatures higher than 1°C (1.8°F). Until October, the world had never passed the 1°C threshold in any month in 135 years of record keeping.

So while there’s a lot of hay being made right now about how warm our atmosphere is, the surface is the real global warming hot spot we should be focusing on.

The satellite record has a lot of uncertainty in the first place. For all the excitement about the satellite spike, the reality is that measuring temperature from space requires a lot of moving parts and is full of uncertainties.

Satellites are hundreds of miles above the surface, they drift in orbit over time and the capabilities of the different sensors and satellites used over nearly four decades of record-keeping has varied.

“I’ve always consider the satellite record the least reliable of all instrumental temperature observations because of the numerous corrections that have to be made, the assumptions involved in combining records from different satellites, etc.” Michael Mann, a climate scientist at Penn State, said in an email.

Because of all these things, the temperature record has been revised numerous times and in most cases, the rise in the temperature trend has increased. In fact, new research published by scientists at Remote Sensing Systems, a group which manages another satellite dataset, has just made some adjustments based on the aforementioned satellite drift issue.

“The new updates look better than what was being used before, and this has the impact of increasing the trends quite substantially — underlying the importance of structural uncertainties in the satellite data that are much greater than issues in the surface data (which have a lot more independent checks),” Schmidt said.

That’s not to say the satellite measurements don’t provide some value, but it is an indication why the surface temperature data analyzed and reported by NASA, NOAA and others is viewed as the gold standard.

That gets to the bigger discussion about not just the present, but also the future. Schmidt said, “people who have focussed on finding flat trends are trying to convince themselves that those trends are predictive of future flatness. People who have focussed on the physics have expected the trends (even on the short term) to spike up again and are basing the long-term projections on their understanding of the system, not statistical cherry-picks.”

You May Also Like:
China, U.S. Lead Global Boom in Wind Power
Syria’s Drought Has Likely Been Its Worst in 900 Years
Coal Use Falls Further as China Plans Massive Layoffs
U.S. Gasoline Use Slows With Uptick in Fuel Efficiency