What Can We Learn from the NYC Forecast ‘Bust’?

New Yorkers went to sleep last night expecting to wake up to their city buried in snow. Instead, they woke up with just a few inches.

As has become standard practice, social media lit up with annoyed and outraged cries accusing meteorologists and the media of overhyping the storm — a common refrain when a forecast doesn’t pan out. Of course, the reality of why the forecast for New York City was so off is much more complicated than a simple headline or tweet about a “busted” forecast. And any analogies between weather and climate forecasts are off-base, experts say.

So, what happened? Well, a major nor’easter happened. It just happened further east than initially expected, with the brunt of the storm falling elsewhere. And the inherent uncertainty in that forecast wasn’t fully communicated to the public. 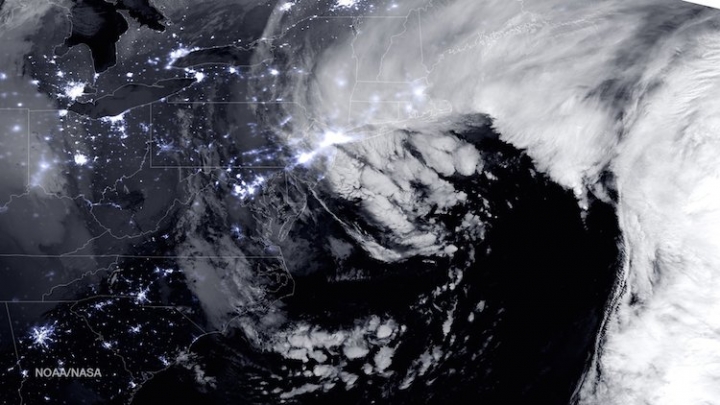 The nor'easter that brought blizzard conditions to eastern Long Island and Massachusetts as seen by the Suomi NPP satellite at 1:45 am EST on Jan. 27, 2015.
Credit: NASA/NOAA

Or, as Marshall Shepherd, director of the atmospheric sciences program at the University of Georgia and past president of the American Meteorological Society so aptly captured it in a blog post Tuesday morning: “Nothing happened. The models were always more certain that Long Island, Boston, and other parts of the Northeast would be the bullseye. And they currently are. The storm is walloping them right now (and continues).”

Blizzard conditions battered eastern Long Island and eastern Massachusetts overnight and into the morning. Snow totals in parts of both regions topped 2 feet. That’s a gnarly storm by almost any reckoning.

So the storm was as bad as meteorologists expected, it just wasn’t bad everywhere it was expected to be. And the reason for that is due to a combination of the inherent difficulty in forecasting snowstorms in general, the quickly developing nature of this storm (leaving less room for decision making) and the fact that weather forecast models aren’t perfect. Not to mention a ravenous 24/7 media looking to make headlines with a catchy name and major weather event.

“This is an imprecise science in a world that covets precision,” New Jersey state climatologist David Robinson said.

Where the worst of the snow fell depended on a number of factors: where the nor’easter developed off the coast after swooping down from the Midwest; how quickly and how much it intensified; and how big the storm was.

What ended up happening, as numerous other meteorologists and weather observers have noted, is that the storm formed and tracked further east than initially anticipated and was more compact than expected. That meant that the western edge of the major snows just brushed New York City’s boundaries instead of stalling out directly over the city as the National Weather Service office in Upton, N.Y., forecasted.

The bands of intense snow in the storm were very narrow, meaning the snow totals went from relatively small to major over a short distance. For example, Central Park recorded around 8 inches of snow, while only 50 miles away, Islip Airport reported more than 20 inches.

“There were sharp gradients in the snowfall totals, meaning big differences over distances of barely tens of miles. So a small error in storm track meant a big error in snowfall,” Adam Sobel, an atmospheric scientist at Columbia University said in an email.

This inherent uncertainty is represented in the models that forecasters rely on to make predictions. Forecast models typically begin to converge the closer in time it gets to an event, but “that didn't happen here,” Sobel said.

While the much-vaunted European Centre for Medium-Range Weather Forecasts — or simply Euro — model was holding steady in its prediction that New York would get hammered, the Canadian model and the NWS’s own Global Forecast System (GFS) model were projecting the storm would shift eastward and away from large snows in the city.

“The forecasters had to make a call about which model to believe down to the end,” Sobel said. They seemed to favor the European model, which received much attention for its accurate prediction of Hurricane Sandy’s path several days before the storm hit New Jersey.

NWS director Louis Uccellini said that because the GFS model was recently upgraded and forecasters hadn’t yet “calibrated” the model to understand its quirks in their particular area, they relied more on the models they were comfortable with and that have historically performed well.

Robinson, the New Jersey state climatologist, likens the situation to banking on the all-star player (the Euro), who ends up having a bad day, while the solid everyday player (in this case, the GFS), “has the clutch game-winning hit,” he said in an email.

Forecasters also need to do a better job of conveying the inherent uncertainty in any weather forecast, much less a complex storm system like this one, several weather experts said.

“If there was a forecast failure here, it wasn't so much that the snow totals were low for NYC, but that our forecasts are not designed to communicate well enough the uncertainty that is inherently there,” Sobel said.

“What we learn from this storm is that we all need to improve how we communicate forecast uncertainty,” Uccellini said during the press call. He added that the NWS also needs to improve the accessibility of its products that note the uncertainties for various snowfall amounts and to better understand the thresholds that officials have to consider when making certain decisions, like driving bans.

Uccellini did praise the decisions of local and state officials in the affected states to close schools and ban travel, saying that while that can be a difficult decision to make “in this case it was the right decision” and that it likely saved lives. Shepherd agreed, saying that he wasn’t averse to being over-prepared for such events than under-prepared.

The uncertainty in the forecasts and the perceived bust also brought out criticisms of climate forecasts, with typical questions of how we can trust climate model projections for 50 years out if weather models can’t accurately predict a storm a day in advance.

The comparison is one of apples and oranges, Shepherd says. In a similar vein, Sobel said, “What people need to understand is that we are not forecasting the weather on individual days 50 years from now, only the average conditions.”

He likened it to a person walking their dog to the store. The dog will meander as it sniffs around, but we know it’s going to end up at the store.

Or, to put it back in terms of uncertainties, even if there’s only a small chance that your house will burn down, you’re going to buy fire insurance.

Ultimately, in this particular storm, meteorologists did the best could with information they had, though there are clearly things they can learn from the way the storm turned out.

And, as Shepherd said, “A historic storm did happen, it just didn't hit NYC hard.”

You May Also Like:
Obama And Modi Are Buddies, But Will The Climate Care?
Tales of Ancient Sea Rise Told for 10,000 Years
Warming Ups Odds of Extreme La Niñas, Wild Weather
16 Images to Illustrate the Blizzard of 2015