The 2016 wildfire season has barely begun and dozens of large wildfires have already raged through Western states, with hundreds of thousands of acres burned. This comes on the heels of a 2015 wildfire season that was the worst on record in the U.S., with more than 10 million acres burned.

These are not just random events. Climate change is producing conditions ripe for wildfires, tipping the scales in favor of the dramatic increases in large wildfires we have seen across the West since the 1970s. Snowpack is melting earlier as winter and spring temperatures rise, and in most states an increasing percentage of winter precipitation is falling as rain, meaning there is often less snowpack to begin with. Summer temperatures are rising, particularly in Southwestern states, where the number of extremely hot days is steadily increasing, creating more days where forests and grasslands are dried out and ready to burn.

In 2015, far below-average snowpack in California and the Pacific Northwest created exceptionally dry conditions across the West, and the region experienced fires of a size rarely seen. Washington’s Okanogan Complex fire was the largest group of fires on record for the state. And multiple years of searing drought in California contributed to several fires that were among the state’s top 10 most destructive fires on record.

A Climate Central analysis of 45 years of U.S. Forest Service records from the western U.S. shows that the number of large fires on Forest Service land is increasing dramatically. The area burned by these fires is also growing at an alarming rate.

The situation in some individual states is more extreme:

And the conditions are likely to get worse in the next several decades. Climate Central’s States at Risk project analyzed historical climate data and downscaled climate projections from 29 different global climate models. We found that in most western states, the climate conditions that can stoke summer wildfires are projected to increase substantially in the relatively short period between now and 2050. Arizona is expected to see more than a month of additional high-risk fire days by 2050. 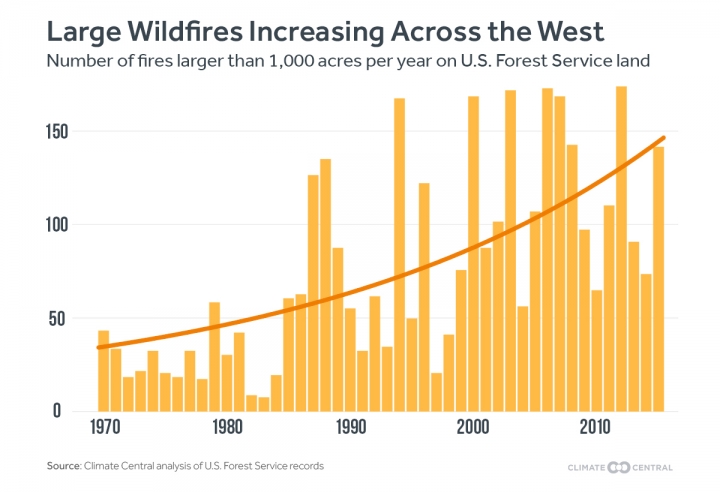 This analysis relies on the Keetch-Byram Drought Index (KBDI), a measure of the dryness of the top 8 inches of the forest floor, which serves as a proxy for the dryness of forest fuels. KBDI is one of a number of indicators of wildfire potential, but is commonly used by the U.S. Forest Service (along with other tools) to predict fire danger. The scale runs from 0 to 800.

Our analysis found that the number of days with KBDI above 600 (a level at which the potential for wildfire is high) would increase significantly between now and 2050 in 10 of the western states if greenhouse gas emissions continue unabated. Across these 10 states, the total number of days with KBDI above 600 is projected to increase 46 percent between 2000 and 2050.

Although many factors influence the ignition and spread of wildfires, our KBDI projections suggest that the conditions suitable for more and larger fires will increase in the near- to midterm. This finding is consistent with other research on wildfire potential and burning.