Second Warmest Start to the Year on Record for U.S.

While the weather is chilly and rainy along much of the East Coast, the Lower 48 as a whole is having its second hottest year to date, thanks in large part to major western warmth, the National Oceanic and Atmospheric Administration announced Friday.

That warmth extended all the way up to Alaska, which is seeing its warmest year on record and temperatures far above normal. 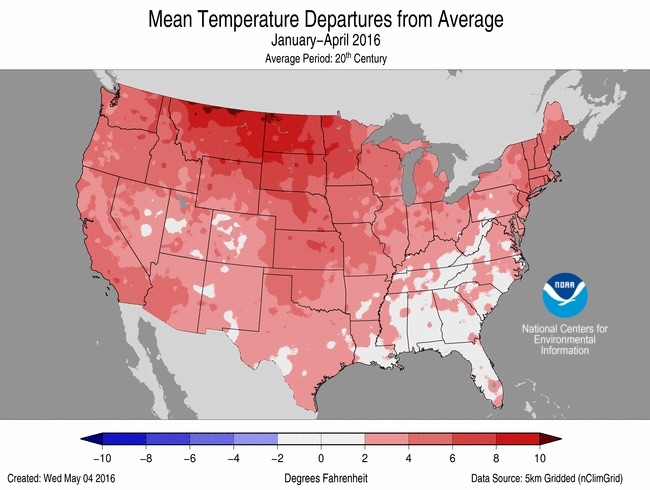 How temperatures across the U.S. differed from normal during January-April 2016.
Credit: NOAA

These record- and near record-setting conditions are part of the larger pattern across the globe, with Earth on pace to set yet another record for warmest year. The year is well ahead of 2015 so far, which only just took the record for hottest year from 2014. While a major El Niño has provided a small boost to global temperatures, the main contributor is human-caused global warming, scientists have said.

The overall mild conditions for the U.S. this spring follow a record warm winter and autumn, with much of that warmth centered out West.

For January through April, the average temperature for the contiguous U.S. was 4°F (2.2°C) above the 20th century average, the second highest departure in records going back 135 years.

Every state was warmer than average over that period, though none of the Lower 48 states individually set a record. Washington, Oregon, and Idaho each recorded their second warmest April in the books, which led to early snowmelt across the region.

“Snowpack levels went from above-average to below-average for many locations over the course of the month,” NOAA climatologist Jake Crouch said in an email. “This could contribute to water resource and drought issues going into the dry season.”

Several locations, including Seattle and Portland, did record their warmest April on record; the average temperature for Seattle this April — 56.7°F (13.7°C) — was warmer than the normal May average of 56°F (13.3°C), according to the Seattle National Weather Service office.

“There was a robust ridge of high pressure that was situated over the West Coast during much of April that contributed to the warm month,” Crouch said. That same warmth extended up into western Canada, contributing to the conditions that set the stage for the intense wildfire that burned through parts of Fort McMurray, Alberta.

While April started out cool for much of the eastern half of the country, temperatures rose for the later part of the month, making the average close to normal.

“Overall April seemed relatively cool in the East, especially following the really warm March, but in the grand scheme of the 122 years of data it was near average for many,” Crouch said.

Alaska continued its streak of exceptional warmth, with a record high April temperature that was 10°F (5.6°C) above the average from 1925-2000. 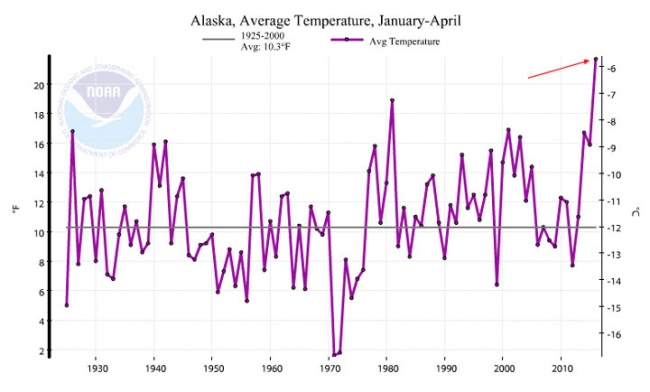 Average temperatures in Alaska for the period January-April since the 1920s, where 2016 is well above all other years.
Click image to enlarge. Credit: NOAA

Anchorage also had its warmest April on record, coming in at 2.8°F (1.6°C) warmer than the record set last year. Those balmy temperature contributed the earliest ever ice break up observed on the Yukon River and the earliest start to the growing season in Fairbanks, NOAA reported.

“The warmth this year so far in Alaska has been extraordinary,” Crouch said. “The record warm April really was an exclamation point on the first four months of 2016.”

Temperatures for the next three months are expected to continue to be above average in Alaska, according to NOAA seasonal forecasts.

“A drastic pattern change would have to occur for the state to drop from the record warm levels,” Crouch said.

Those same forecasts also put greater odds on warmer-than-normal temperatures across a large horseshoe-shaped swath of the country stretching from coast to coast and across the northern tier of the central U.S.