A record-breaking heat wave intensified drought conditions in much of the West during the past week, with 72 percent of the land area in the 10 Western states now in drought conditions, according to the latest update to the U.S. Drought Monitor. 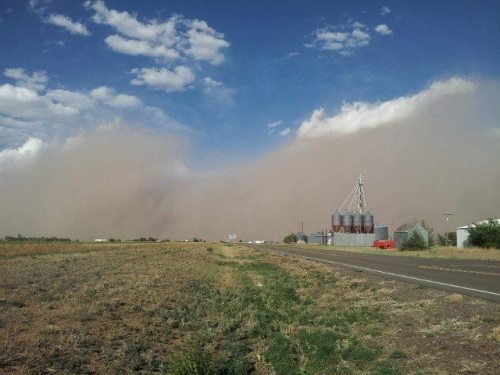 The western part of Oklahoma has been left high and dry by a lack of rainfall.

The worst impacts of the drought are concentrated in the Southwest: New Mexico, Texas, Southern Colorado and the western parts of Kansas, Oklahoma and Nebraska all contain land that is under extreme or exceptional drought. The hot weather — Denver had its earliest  100-degree day on June 12 — served to exacerbate existing drought conditions and helped fuel deadly wildfires in Arizona, California, Colorado, Nevada, New Mexico, and Oregon. In California, 2013 has been the driest year on record to date, and the lack of rainfall is making the state more vulnerable to wildfires.

“The overall pattern of hot and dry conditions, combined with year-to-date below normal precipitation, led to continued deterioration of pasture and rangeland conditions across Arizona, California, Nevada and New Mexico,” said David Simeral of the Western Regional Climate Center, in a statement accompanying the Drought Monitor.

According to the U.S Department of Agriculture (USDA), 100 percent of the range and pasture land in New Mexico is in poor or very poor condition.

The ongoing problem of drought was a major focus of the spring State of the Climate report, which was released by the National Oceanic and Atmospheric Administration this week. This year, the period from March to May has been the second-driest on record in New Mexico, where water supply concerns are escalating.

Across the rest of the country, drought conditions have improved significantly from the nearly coast-to-coast drought that was present last summer. On the East Coast, Tropical Storm Andrea washed away all lingering traces of drought, including those in Florida, which had been nearly engulfed by moderate and severe drought as recently as February.

In the Midwest, the unusually wet March-May period has pushed the boundary of the drought to the west, allowing states like Iowa, Minnesota, Wisconsin, and the eastern parts of the Dakotas, Kansas and parts of Oklahoma to emerge from the drought. The sudden shift in precipitation has made flooding, rather than drought, a bigger concern in states on the Upper Mississippi River.

On Oklahoma rainfall maps, the state appears to have been cleaved in half, with the south central and eastern areas receiving above-average precipitation during the past month, and western parts of the state left high and dry. According to the Oklahoma State Mesonet, which operates a network of weather stations across the state, the town of Hooker in the Oklahoma Panhandle, received just 0.08 inches of rainfall during the month of May. That was the second-lowest May total for the town since record-keeping began in 1906. Yet in Oklahoma City, about 250 miles away, had its wettest May on record, with 14.52 inches of rain. It was Oklahoma City's second-wettest month of any month, behind the 14.66 inches it received in June, 1989.

Related Content
Optimism for Crops in Midwest; Dire Straits in the West
Tinderbox-Dry Western U.S. at High Risk of Major Wildfires
The Impact of the 2012 U.S. Drought: Pick Your Poison
Ongoing Coverage of Historic Drought in U.S.