Dan Nichols was hauling in a gillnet laden with the fruits of a late-season Alaskan salmon run when something heavy flopped out of it, then slid to the front of his boat. “I knew what the tail was,” he says. Surprised, the mustachioed fishing veteran stopped picking salmon from his net and approached the itinerant sea creature. “I had to stop what I was doing.”

Nichols recognized the skipjack tuna at the bottom of his boat from his time fishing the balmy waters off Southern California and Hawaii. His fish-out-of-tropical-water joined a growing list of examples of locally exotic wildlife showing up in the unusually warm waters that have recently been coursing past the West Coast: A green sea turtle — that venerable visitor to equatorial atolls — was accidentally snagged by fishermen off Northern California. An ocean sunfish was spotted near Prince William Sound, hundreds of miles north of its typical range. 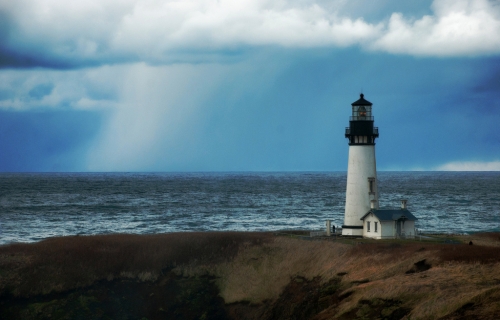 What’s been heating up the waters? It’s tempting to blame global warming. Sea-surface and nearby coastal air temperatures in the Pacific Northwest have warmed by 1°F or 2°F since 1900. This September, the waters have been as much as 5°F above average. But a study published Monday by the Joint Institute for the Study of the Atmosphere and Ocean, which is a project of the National Oceanic and Atmospheric Administration and the University of Washington, points the climatological finger for most of the change at a different culprit.

The new analysis suggests that a little more than a century of warming in the Pacific Northwest, and in a maritime region stretching out to Hawaii and Alaska, has been the happenstance result of natural variation; a consequence of the waxing and waning of powerful oceanic and atmospheric cycles. The researchers behind the paper, published online in Proceedings of the National Academy of Sciences, say anthropogenic greenhouse gas pollution could start having an effect on regional temperatures. It might already be doing so. But, between 1900 and 2012, they concluded that humanity’s temperature-changing influence paled in comparison with that of the intense natural fluctuations of the wild winds and waters of the world’s largest ocean.

“It was a mind-blowing result,” said climatologist James Johnstone, one of the paper’s two co-authors.

Natural changes in winds, air pressures and ocean currents were found to be responsible for more than 80 percent of the observed warming during the 112 years studied. The findings could help scientists refine projections for climate change’s impacts in Western states vulnerable to droughts, flooding and vicious wildfires.

“The appearance of a century-long warming trend immediately implies some human impact,” Johnstone said. “This research suggests that there could be other causes of warming or even cooling trends over a certain time period.”

The paper was described by Clifford Mass, a professor of atmospheric science at the University of Washington, as “extremely important.” 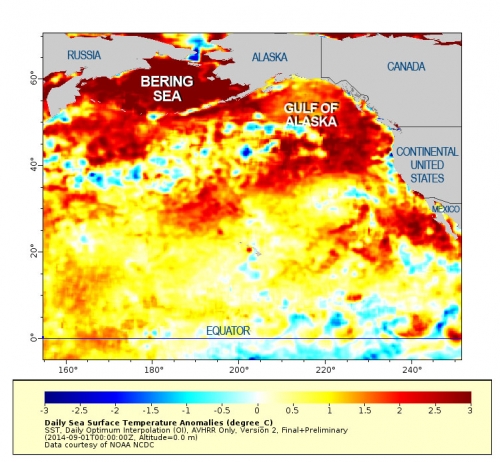 The darker the red, the higher above average the recent sea-surface temperature.
Credit: NOAA

“The warming along the West Coast has been extremely modest,” Mass said. “What warming there has been, has been almost entirely due to changes in the circulation, and not due to anthropogenic forcing.”

But, “this is not to say global warming is nonsense,” he added. As greenhouse gas levels continue to rise, Mass expects humanity’s greenhouse gas pollution to play a growing role in fiddling with the region’s thermostats.

Surface ocean temperatures along the West Coast have a strong influence on nearby land weather, affecting air temperatures, and they are closely linked with daily fog coverage. These sea-surface temperatures are influenced by winds. When winds are strong, they can churn over the water, sucking cool water up from the ocean’s depths. They also shape ocean currents, which can shift water between polar and tropical climates. The winds can affect rates of evaporation, which cool an ocean in much the same way as sweating can cool the skin, affecting the amount of heat that moves between the sky and the ocean.

These ocean winds, in turn, are affected by variations in natural cycles that manifest in changes at the surface of the ocean and immediately over it. The most influential cycles are the El Niño Southern Oscillation and the Pacific Decadal Oscillation, which is a mighty cycle that typically takes 20 to 30 years to switch between its warm and cool phases.

While Mass was not involved with the new study, his prior research reached similar conclusions regarding a strong influence of Pacific Ocean cycles on changes in annual snowpack levels in the Cascade mountains. Other studies have linked these oceanic cycles with earlier snowmelts and warmer winters in California since the 1940s, and with a decline in California’s coastal fog since the early 20th century.

The new research built on those prior findings. “This was an effort to try and refine our understanding of the causes, or trends and variations, in the climate of the Eastern Pacific and West Coast states,” said Nate Mantua, now a NOAA fisheries scientist, the other author of the newly published paper. Mantua and Johnstone compared sea surface temperatures since 1900 with sea-level air pressure observations, which can be used as proxies for wind speed measurements. 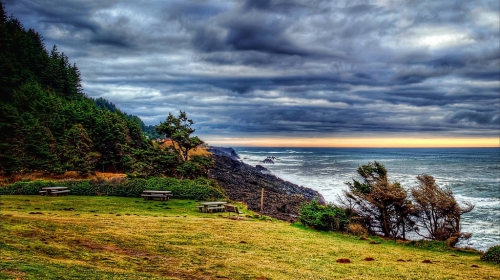 The pair reported finding a “strong” correlation between sea-level pressures, or wind speeds, and sea-surface temperatures. They found evidence that changes in atmospheric pressure fields preceded changes in ocean temperatures by several months.

They wrote that their comparisons of sea-level pressures, sea-surface temperatures and land-based air temperatures provided “consistent evidence for strong” regulation of temperatures by changes in ocean cycles “from monthly to century time scales.”

Could these ocean cycles be changing because of greenhouse gas pollution, or because of other phenomena that can contribute to climate change? The researchers don’t think so. They used climate models to test whether the observed changes in sea-level pressure could be explained away by the effects of volcanic eruptions, changes in the intensity of the sun and changes in greenhouse gases and other forms of air pollution. “Not a single one of 31 simulations had anything like what was observed in the changes in the North Pacific,” Mantua said.

John Abatzoglou, an associate professor at the University of Idaho’s geography department, isn’t ready to swallow the new findings hook, line and sinker. “If these trends in circulation are legit, it calls for a greater understanding of underlying processes driving them,” he said. “I think that’s a really interesting field of research that requires us to go back and look at paleo records.”

Abatzoglou co-authored research, published this year in the Journal of Climate, that reached a different conclusion. Abatzoglou and two Oregon State University scientists compared weather observations with climate data for Oregon, Washington, Idaho and western parts of Montana and Wyoming. They concluded that greenhouse gases were “the leading contributor to” regional warming since 1900.

Abatzoglou cautioned that some of the older pressure data used in the new study might contain errors, particularly data that predated the 1940s. And he said it can be difficult to factor the effects of the Pacific Decadal Oscillation (PDO) into any climate studies, given that “high quality data” exists for fewer than two of its complete oscillations.

“Any discussion of climate change, anthropogenic versus natural, over the western U.S. can get messy when inviting the PDO to the party,” he said.

If the new findings hold water, then Dan Nichols’ fisherman’s tale-worthy tuna catch could remain a curious anomaly, at least for the first half of this century. The results suggest that the unusually warm waters that ushered the skipjack north, where it blundered into a gillnet intended for cold water-loving salmon, could be largely explained by natural variation.

“I don’t think anthropogenic climate change is playing a big role,” Mantua said. “The warming of the northeastern Pacific Ocean in 2013 and 2014 was due to persistent wind and weather patterns. Once those wind patterns break down, the unusually warm sea-surface temperatures will fade away.”

You May Also Like:
El Niño is Kinda Sorta Maybe Here
NASA Ranks This August as Warmest on Record
The $90 Trillion Climate-Stabilizing Cookbook
What Will Survive in Hot, Acidic Oceans?
Arctic Sea Ice to Reach Sixth Lowest Extent on Record