Here’s How Arctic Sea Ice Could Shrink Even More

As the sea ice covering the Arctic continues to shrink under the influence of greenhouse gas-induced warming, it’s causing a host of other changes in the region, including the growth of large waves in the previously iced-over areas. Those waves could potentially reinforce and hasten the demise of sea ice, leading to further changes in the fragile polar realm.

Changes brought on by global warming in the Arctic region have been well documented. Temperatures there have risen twice as fast as the global average. That rise is tied to a decline in Arctic sea ice, which has seen its seasonal minimum area shrink by nearly 14 percent per decade since the late 1970s. Those changes could be influencing weather patterns in lower latitudes of the world, though that’s an area of continuing research for scientists. 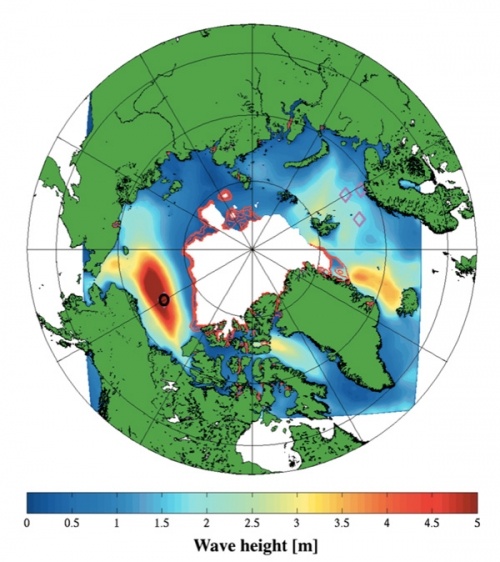 A map showing wave heights in the Arctic based on wave model run with conditions during a September 2012 storm.
Credit: Thomson and Rogers, 2014

And in the latest sign of more changes afoot, according to a recent study published in the journal Geophysical Research Letters, waves are swelling to heights never before seen in the Arctic Ocean — a shift that’s tied to the loss of sea ice and could further exacerbate it.

“With that extra expanse of space, not only are you building more waves and bigger waves but the characteristics of the waves change,” said study lead author Jim Thomson, an oceanographer at the University of Washington.

With any expanse of open water, a little breeze can stir ripples or even choppy waves. You can see it on display at your local pond or even by blowing across the surface of a glass of water.

But large expanses of open water give waves time to really get rolling and form swells. Waves that roll in at the beach are the product of a complex interaction of weather and ocean patterns hundreds, or sometimes even thousands, of miles away.

Thomson recently analyzed data from 2012, the year with the lowest summer sea ice minimum recorded, and found swells of unprecedented heights in the Arctic. The results show that during two major storms in the region, waves swelled up to 16 feet in height.

The swells in the Arctic could expedite the recession of sea ice and coastal erosion, both already problems for the region.

“Swell waves carry more energy so you would expect them to have a larger impact (on sea ice). They’re able to flex and stress and strain ice more than a short wave could,” Thomson said. “That may really change the wave-ice interaction.”

“With thinner ice in the Arctic, the impact of waves is also large because the thinner ice is more easily broken up,” Walt Meier, a NASA Arctic researcher who wasn't involved with Thomson’s research, said in an email. “Now, in the new Arctic, it’s easier for waves to form, they are bigger, and their impact on the ice is greater.” 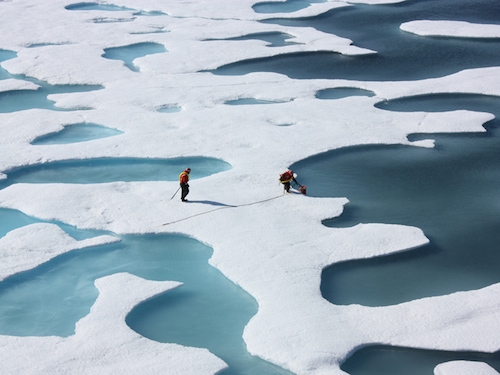 The big issue for forecasting future wave activity and its impacts is data. There are limited observation buoys in the region and summer research is limited by the short season and a small number of icebreakers and other ships that can work in such a harsh and erratic environment.

Satellite data can fill in some gaps and provide a big picture view, but the underlying ocean dynamics can remain hidden from their instruments. Thomson said having a buoy sitting in the middle of a series of waves provides a much richer understanding of what’s going on than the view from on high that satellites afford.

Computer modeling can also assist researchers in understanding broad changes and dynamics and Thomson said ultimately it will be a combination of all three methods that will define what exactly waves mean for sea ice in a changing Arctic.

Thomson is working with an international team of researchers this summer to study the growing ice-free section of the Arctic. “That’s something to show how complex the problem is; you need wave, ice, ocean, weather experts,” he said. When he spoke to Climate Central, he had just returned from a research cruise to the region to install monitoring equipment. Those labors are already returning data in near real-time.