On its surface, the Greenland ice sheet is a vast expanse of seemingly immovable ice. But beneath the monotonous stretch of white, scientists have discovered evidence of waves rippling through one of its outlet glaciers and roiling its innards.

The waves, observed during the two most intense melt seasons on record, sent an unprecedented cascade of ice and water rushing into the sea and warping the very bedrock upon which the ice sits. As temperatures continue to rise, scientists fear that massive waves of ice could expedite Greenland’s melt even further, pushing sea levels higher. 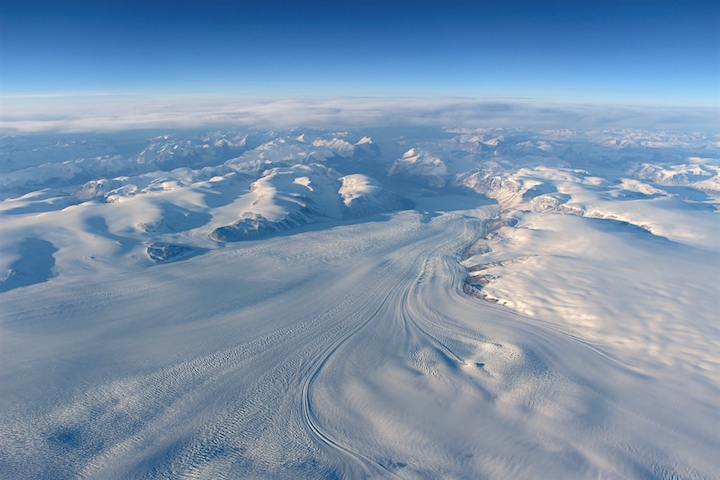 It’s the latest piece of bad news about Greenland’s ice. The ice sheet has been pouring roughly 270 megatons of ice a year into the ocean via the glaciers that stretch out from its hulking mass since 2000. That’s a big uptick compared to preceding decades.

The new research, published earlier this week in Geophysical Research Letters shows a new way that climate change is taking a toll. Scientists at the NASA Jet Propulsion Laboratory, led by Surendra Adhikari, were looking at data from a series of GPS stations set up around the various outlet glaciers that tumble from Greenland’s ice sheet to the sea. Ironically, they were looking at the GPS data to see if it was worth maintaining the network of stations that rings Greenland.

They found evidence of a never-before-observed phenomenon affecting Rink Glacier, a glacier on the western flank of Greenland. The glacier usually sends about 11 gigatons of ice into the ocean each summer melt season.

But 2012 was different. A fast-moving (by glacial standards), massive wave rumbled through the glacier’s interior, causing an extra 6.7 gigatons of ice and water to slosh into the sea. That’s the equivalent of 55 million blue whales, the largest animal on earth.

Scientists picked up on the wave using GPS sensors, which shifted more than half an inch as it rolled by. That might not sound like much, but the sensor is sitting on stable Greenland bedrock, which isn’t exactly susceptible to perturbations.

A similar, though less extreme, wave passed by the sensor in 2010. The behavior is like nothing scientists have ever observed on Greenland.

“If you were to place a piece of plywood onto two sawhorses then place a large rock in the middle, the plywood would bend, sagging in the middle,” said Erik Ivins, a researcher at JPL who co-authored the study. “When the rock is removed, the plywood returns to the original potion.”

Though they’re still trying to understand exactly why it happened, there are a few major clues. Those clues don’t bode well for the future of Rink Glacier or the enormous amount of ice it’s holding back.

The melt seasons of 2010 and 2012 were two of the most extreme on record. In 2012, a prolonged summer heat wave coupled with soot from Siberian fires that cast a dark coat over the ice sheet resulted in 95 percent of the ice sheet going into meltdown.

Scientists suspect that that meltdown is responsible for the wave that tore through Rink Glacier. Meltwater from the interior created new pathways for water to move around and likely lubricated the based of the glacier where it meets the bedrock, priming it for the massive shudder of ice that moved through it.

Robin Bell, an ice researcher at Lamont-Doherty Earth Observatory, called the research a “beautiful study linking how the surface of the ice sheet melts and slides with how the surrounding mountains (solid earth) responds. (It’s) remarkable to see the earth lurch in a year when the ice changes more.”

Temperatures are likely to only keep rising due to climate change. Previous research has suggested that melt seasons like 2012 could become the norm by the end of the century, increasing the risk of more glacial waves in the coming century.

“We suspect that solitary waves may be unique to high melt years,” Adhikari said. “The more warming, the more surface meltwater available to trigger ‘extraordinarily’ dynamic behavior of glacier such as the one we discovered in Rink Glacier.”

Greenland’s melt is currently responsible for roughly 25 percent of observed sea level rise. That percentage could increase in the coming years if what happened at Rink Glacier spreads to other glaciers.