Wind turbines could be twirling off the coast of Long Island and New York City sometime in the next few years now that the Obama administration has set aside a new offshore wind farm development area.

The U.S. Department of Interior has created an 81,130 acre “wind energy area” in the open Atlantic about 11 miles south of Long Island. The move is part of the Obama administration’s efforts to address climate change, in part by leasing federally-controlled waters off the East Coast for offshore wind power development. 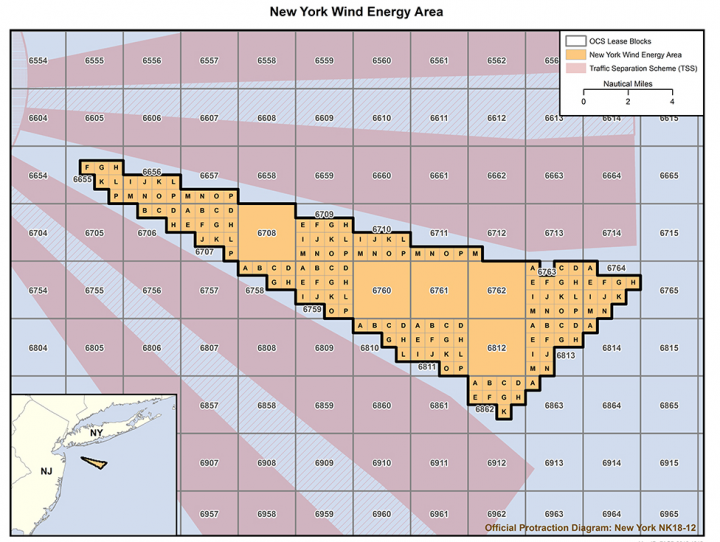 The designation of New York’s offshore area is based on a 2011 proposal from the New York Power Authority to build 194 wind turbines that could generate 700 megawatts of power for Long Island and New York City. That plan is scheduled to proceed following an environmental review of the wind farm later this year.

“The area is large enough for a large-scale commercial wind project, which could make substantial contributions to the region’s energy supply and assist local and state governments — including New York City — in achieving their renewable energy goals,” Abigail Ross Hopper, director of the U.S. Bureau of Ocean Energy Management, said in a statement on Wednesday.

The U.S. has huge potential for wind power development off its shorelines — enough for 4,000 gigawatts of wind power capacity, or enough to light up roughly 480 million homes if fully developed. Though they are commonplace in Europe, no offshore wind farms are operating in the U.S. A small one off the coast of Rhode Island is under construction, however, and could begin generating electricity later this year.

The Obama administration wants to harness the nation’s vast offshore wind resources as a way to tackle climate change. The White House has included offshore wind power in its Climate Action Plan, which aims to develop 20,000 megawatts of renewable electric power capacity on federally-controlled lands and waters by 2020 as a way to wean the country away from coal, the globe’s largest single driver of climate change.

To meet that goal, the administration has been creating wind power development areas and leasing waters for wind farms off the coasts of New Jersey, Maryland, Delaware, Massachusetts and Virginia.

Most recently, the federal government leased more than 300,000 acres of water off the coast of Atlantic City, N.J., where more 3,400 megawatts of wind power could be developed, or enough to power 1.2 million homes.

You May Also Like:
Syria’s Drought Has Likely Been Its Worst in 900 Years
Coal Use Falls Further as China Plans Massive Layoffs