As the U.S. has undergone a rapid and massive shift to natural gas from coal, one benefit has gone almost entirely overlooked: the amount of water needed to cool the nation’s power plants has dropped substantially.

The widespread adoption of hydraulic fracturing (fracking) technology has led to dramatically higher natural gas production in the U.S. since 2005. The resulting drop in natural gas prices, coinciding with new EPA air quality regulations for coal-fired power plants, has led to a surge in natural gas-fired electricity generation nationwide.

That shift has translated into big changes in the amount of water being withdrawn from lakes and rivers to cool power plants. And it’s an important shift as nationally, 38 percent of all water withdrawn is for power plants. 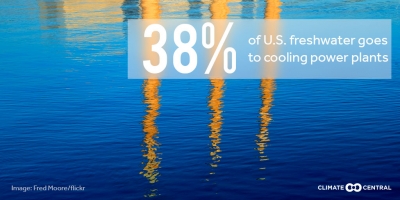 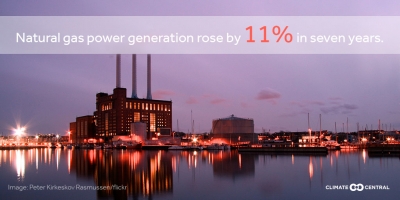 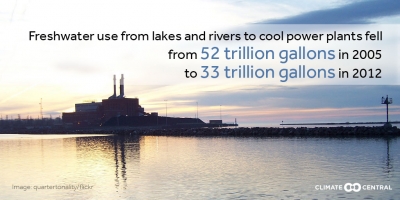 Water withdrawals for power generation dropped by more than 1.5 trillion gallons per year in Ohio, New York, and Illinois; 10 states had decreases of 1 trillion gallons or more. Electricity generated from natural gas increased 370 percent on average in those 10 states, with the largest absolute increases coming in Alabama and New York.

Some power plants are designed to be cooled by water withdrawn from a river, lake, or ocean and then returned to those waters. To protect fish and other wildlife from dramatic increases in water temperatures from the discharges, regulations limit how much the water can be warmed at the power plant before it is discharged. In hot and/or dry periods some power plants have been forced to reduce output, shut down completely, or seek exemptions from the regulations.

Water consumption in power generation refers to water withdrawn from a river, lake, or ocean but not returned to the water body from which it came. Evaporation from a cooling tower is one example. Nationally, freshwater consumed to cool power plants was about 1 trillion gallons in 2012. In contrast, freshwater withdrawals were 33 trillion gallons. Power plants without cooling towers account for most of the withdrawals. These plants use “once-through” cooling systems in which water withdrawn from a river, lake, or the sea absorbs heat as it cools the plant and is discharged back to its source before its temperature exceeds the regulated limit. Most new natural gas power plants use cooling towers and many recently retired coal plants used once-through cooling, which helps explain the drop in water withdrawals for power generation nationally.

Even with reduced power plant water usage, in 20 states, all in the eastern half of the country, water withdrawn for cooling power plants accounts for more than half of all water withdrawn for all uses in that state, including agriculture. In nine states, more than three-quarters of water goes to power plants. Power generation accounts for less than 2 percent of all water use in each of the 11 states from the Rocky Mountains to the west coast. In California, where irrigated agriculture uses vast amounts of water, power generation accounts for less then 2 tenths of 1 percent of all water used in the state.

While natural gas power plants require less water than coal or nuclear plants, fracking to produce gas typically requires 3 to 5 million gallons of water per fracked well, and significant concerns have been raised about local environmental impacts of fracking fluids that are a mix of water and chemicals. However, in terms of water quantity, fracking consumes a relatively insignificant volume of water compared to that required to cool power plants: for the 10 states that fracked the most shale gas wells in 2012, average water consumption for cooling power plants per cubic foot of natural gas burned was 30 times greater than the water consumed for fracking per cubic foot of shale gas.