With its snowpack at abysmal levels and some streams recording record low flows, Washington is perhaps looking at a worse drought than it anticipated even a month ago. The impacts already being seen prompted Gov. Jay Inslee on Friday to expanded an emergency drought declaration to cover the whole state. 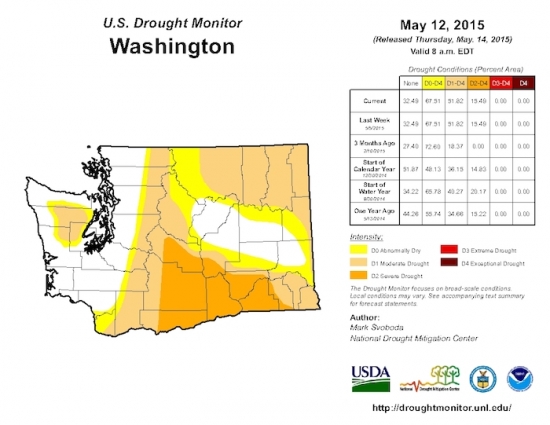 Extent of drought in Washington as of May 14, 2015.
Credit: U.S. Drought Monitor
Click image to enlarge.

“We’re really starting to feel the pain from this snowpack drought,” Inslee said in a statement. “Impacts are already severe in several areas of the state. Difficult decisions are being made about what crops get priority water and how best to save fish.”

More than half of Washington is in some state of drought, according to the latest map from the U.S. Drought Monitor. Drought in the worst-hit places is expected to persist or intensify through the summer, according to government forecasts.

Unlike the intense drought that has plagued California, which is a factor of both heat and lack of precipitation, the drought across the Pacific Northwest is what has been called a “wet drought.” The region had plenty of storms blow across over the winter, but because of record warm temperatures, most precipitation fell as rain and not snow.

Both Washington and Oregon have reservoirs and watersheds that depend on snowmelt in the spring and summer to keep water flowing at normal levels. As of May 8, 66 out of 98 snow-monitoring stations were snow-free, an earlier date than usual, Karin Bumbaco, assistant state climatologist in Washington, said in an email.

This type of drought, with warmer temperatures and less snow, is something expected to occur more often in the area as temperatures rise because of global warming.

The expanded drought declaration was made because 85 percent of the state met the two criteria needed: a water supply of 75 percent of normal or lower and expected hardships for people, farms and fish. The declaration allows access to drought relief funds for drilling or deepening wells and for buying water rights. The Department of Ecology has asked for $9.5 millon from the state legislature to help it conduct drought relief activities.

The state’s Department of Agriculture is projecting crops losses of $1.2 billion, and authorities are worried about wildfire dangers from parched lands as the summer fire season begins.

Because of low streamflows in some areas, the Department of Fish and Wildlife and the Department of Ecology have had to work to move fish to cooler upstream waters, Bumbaco said. Water has also been moved between creeks to help bolster streamflow for fish.

Irrigation districts in the Yakima Basin, the state’s most productive agricultural area, are periodically cutting off water to extend their supply into the summer, according to a statement from the governor’s office.

There was some good news, though, as recent storms did bring rains to south-central Washington that have eased pressure on reservoirs in the Yakima area and other districts, Bumbaco said.

You May Also Like:
El Niño Gains Momentum, Could Bring Warmest Year
May CO2 Peak Shows Trend Is Up, Up, Up
NY Fracking Report Underscores Quake, Climate Risks
With Climate Change, Ticks Marching Farther and Earlier