The flat, glistening, white expanse of the Greenland Ice Sheet, stretching out across hundreds of thousands of square miles, appears placid, unchanging … boring even. But this tranquil surface belies the turmoil taking place below, at the base of the ice sheet. There, scientists have discovered sections of ice up to a kilometer thick and tens of kilometers long where meltwater has refrozen to the base of the ice sheet, setting off a dynamic process that causes the layers of ice to build up over the eons and contort into sinuous folds. 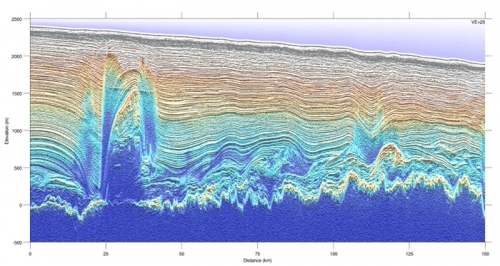 Melting and refreezing at the bottom of ice sheets warps the layer-cake structure of the ice above, as seen in this radar image from Greenland.
Credit: Mike Wolovick

The refreezing and folding heats the surrounding ice, which impacts how it flows on its journey from the ice sheet’s interior out to the ocean. Several of those regions coincide with the place where one glacier dramatically speeds up. Understanding what controls the behavior and flow of ice sheets and the glaciers within them is a key part of improving climate models that project what effects global warming might have on the ice and how that might impact sea level rise.

“What this shows is we have to go past just watching the surface,” said Robin Bell, a climate researcher with Columbia University’s Lamont-Doherty Earth Observatory and leader of a new study describing the strange sections of ice in the journal Nature Geoscience.

Peering Inside an Ice Sheet

Sections of refrozen ice were known to exist at the base of the East Antarctic Ice Sheet, which is much thicker, larger and colder than the Greenland Ice Sheet, itself almost incomprehensibly large. Early radar measurements made by flights over Greenland hinted that something similar could be hiding under the surface there, but the data was too coarse and sparse to tell for sure. Some thought the radar signatures were the echoes of mountains trapped below the ice. But her experience in Antarctica had Bell “pretty convinced” that they were showing these “basal units” of refrozen meltwater.

She was able to confirm her suspicions when NASA’s Operation IceBridge — a series of scientific flights taken across Earth’s polar region, taking radar scans, measuring gravity and gathering other valuable data — were able to peer beneath the ice surface in greater detail and in side-by-side transects. Bell compared the difference between the early radar and the data from IceBridge to writing with a crayon and then with “a beautiful fine marker.”

The radar data showed that while the surface of the ice sheet may appear “boring” during the hours and hours spent in a research plane, “when you can actually look inside the ice sheet, it’s like, ‘Wow’,” she told Climate Central. 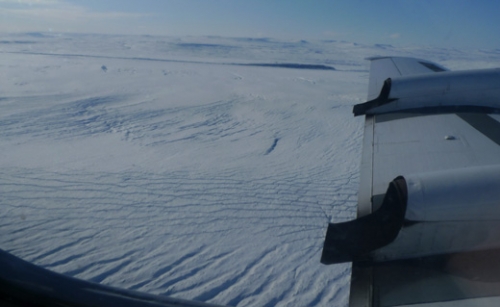 The flat topography of the Greenland Ice Sheet seen from a plane stands in sharp contrast to the jagged features found to be underlying much of the ice sheet.
Credit: Kirsty Tinto

“They did a commendable job of locating these features,” said glaciologist Joe MacGregor, of the University of Texas, who was not involved in the research.

The basal units start with meltwater — a key influence on the flow of glaciers and ice sheets. Meltwater comes from two sources: It forms when the sun’s rays shine on the surface of the ice sheet in the summer, creating pools that can then go cascading down huge conduits in the ice sheet called moulins, eventually winding its way to the ice sheet’s base. It can also form at the base of the ice sheet as heat generated in Earth’s interior warms the ice or as friction from the movement of the ice against the bedrocks causes it to melt.

Once there, two processes can also cause the meltwater to refreeze to the bottom of the ice sheet: “One is it just kind of cools slowly,” Bell said. As if you took it and “just threw it in the freezer.”

The other is a little more complicated. The movement of the meltwater is under the control of the glacier, which can cause the water to flow upslope on the underlying bedrock. This causes the water to become supercooled and it freezes instantly.

When the meltwater refreezes, Bell and her colleagues think that something that sounds a bit paradoxical happens: The freezing water gives off heat, which softens the surrounding ice and causes the layers of ice to warp to create what Bell calls “tortured ice.” 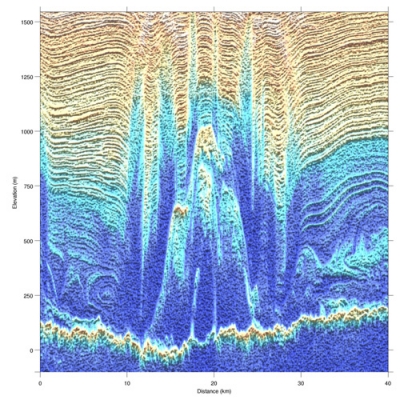 The ice sheet is often described as a layer cake, made up of layers of ice that build over the eons as new snow is deposited at the top of the ice sheet, pushing down on older layers sitting underneath. The basal units throw this tidy arrangement into disarray, bending the layers and forcing older layers atop newer ones. These contortions can reach halfway up the thickness of the ice sheet.

“It’s a pretty ugly cake if that’s what it is,” MacGregor said.

“It does actually seem to affect how one of these glaciers is flowing,” MacGregor said.

That match was a surprise to the team, but shows them that there are unanticipated processes controlling the flow of the ice, Bell and MacGregor both said, and the bottom of the ice sheet is more varied than previously thought.

It’s too early to tell how this refreezing and its effects might factor into calculations of sea level rise, MacGregor said, but it does give scientists more insight into the workings of the whole ice sheet system.

Now, scientists need to model the processes at play to figure out exactly how it works and see if they can predict “where and when this process happens,” Bell said. Whether the freezing is controlled by the meltwater, or the thickness of the ice overhead or perhaps by the cycling of the ice ages isn’t known. “I officially say, ‘We don’t quite know yet’,” Bell said.