Parts of southern England and Wales were swamped with storm after storm after storm during the winter of 2013-2014, as roads turned into streams and fields into lakes. The relentless rains flooded thousands of homes and businesses and cost more than $700 million in damages.

It was both the wettest January and the wettest winter ever measured at the Radcliffe Observatory in Oxford, which has kept daily precipitation records since 1767. 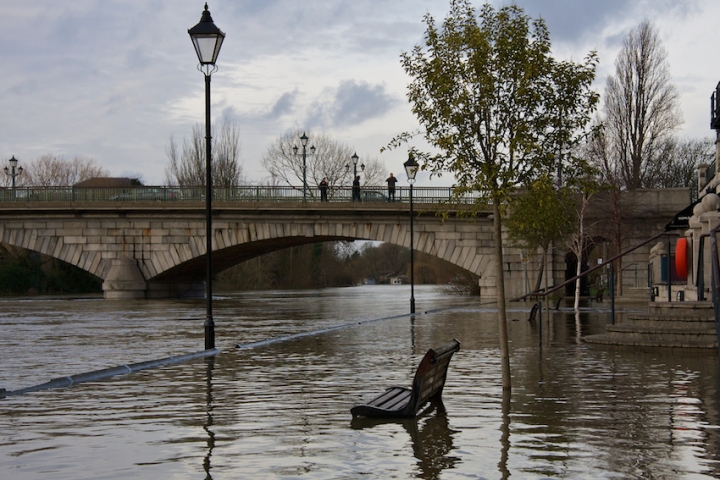 Flooding along the river at Staines-upon-Thames in Surrey, England in a photo taken on Jan. 8, 2014.
Click image to enlarge. Credit: flickr/Mario Sanchez Prada

Climate change could mean England is in for more such extreme rainfall events because of increasing moisture in the atmosphere and changes in atmospheric weather patterns, a new study detailed online Monday in the journal Nature Climate Change finds.

The study is the first to take so-called event attribution a step further to investigate how warming has increased the risks of flooding impacts, finding that it has likely put more properties at risk and raised the costs of such an event.

When combined with previous studies, this new effort provides further evidence that that winter weather and its significant impacts in the U.K. “had a link to human-induced climate change,” said study co-author Peter Stott, who leads the Climate Monitoring and Attribution team at the U.K. Met Office.

While no one storm that blew over the U.K. that winter was particularly extreme on its own, the repeated bouts of rain overwhelmed the ability of streams and the ground to absorb all that water. The hardest hit areas in southern England saw 14.5 inches of rain over just December and January, and that January was the wettest in the area since 1910 by a “very wide margin,” according to the Met Office.

One reason the rains kept coming was a larger pattern in place in the atmosphere, with the jet stream in an unusual position that kept guiding storms over the increasingly soggy region.

Studies conducted relatively quickly after the event found that climate change had made such extreme rainfall more likely, but the new study aimed to examine any link in more detail.

The research team, which included scientists involved with Climate Central’s World Weather Attribution project, used a now-routine method that involves running multiple iterations of several climate models. The models are used to compare the odds of such an event happening in a world with human-caused warming to one without it.

The modeling showed that such an event was about 40 percent more likely in a world with warming, both because of the increased moisture in a warmer atmosphere — a key tenet of climate change — and because that particular jet stream pattern was more likely to occur and corresponded to higher rainfalls in southern England.

The researchers then used statistical methods to break down the relative contributions of the two influences on the increased odds. They found that while the increased moisture content was the primary factor in the extreme rainfall, accounting for about two-thirds of the added risk, the atmospheric pattern still played a noticeable role, filling out the remaining one-third.

Stott cautioned, though, that this was only one study and that more will be needed to pin down that breakdown. “This is not yet the definitive answer,” he said.

The team took their effort a step further to see how increased rainfall associated with warming would affect river flow along the Thames and then how many more properties would be put at risk and how much more that would cost. Theirs is the first attribution study to extend an analysis to such concrete impacts, which is what insurance companies, governments and the public is most concerned about. 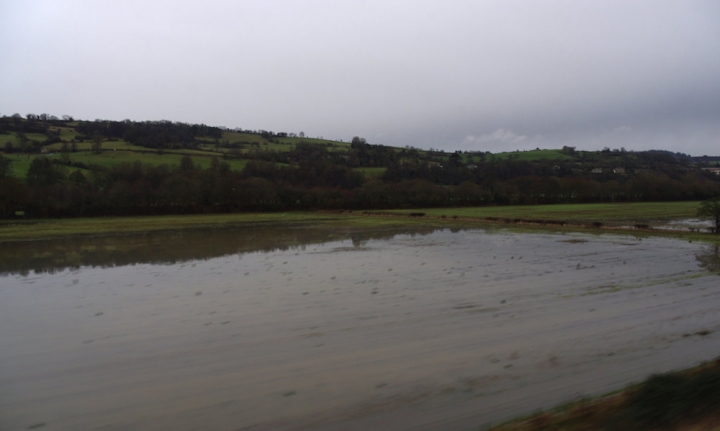 “This is something we’ve always wanted to do with an attribution study,” said study co-author Neil Massey, a researcher with Oxford University’s Environmental Change Institute.

“That’s really our next big frontier challenge,” said Jim Kossin, an atmospheric scientist with the Center for Weather and Climate, part of the U.S. National Oceanic and Atmospheric Administration’s National Centers for Environmental Information. “That is really where the rubber meets the road.”

Kossin was not involved with the study, but collaborates with Stott on editing the annual attribution special issue of the Bulletin of the American Meteorological Society.

The rainfall from the models was fed into a hydrological model for the Thames and then combined with flood risk maps. They found that, for a 1-in-100-year rain event, about 1,000 more properties would be at risk, with a cost of about $40 million, but with a wide range of possible outcomes, from fewer properties at risk to several thousand.

The researchers hope that as efforts to look at the changing risk of impacts are refined, they can help societies better prepare for those impacts.

For example, if engineers target flood defenses for a 1-in-200-year flood, but under climate change such an event becomes a 1-in-150-year flood, “then you’re not going to be as well protected as you thought you were,” Massey, who was kept from the office for two weeks because of the 2013-2014 flooding, said.

Right now, the uncertainty in the results is too high to be of use to insurance companies or governments, Stott said. “There’s a lot of work to do before this information can be used.”

But, overall, he said, the study is “pointing the way forwards.”

You May Also Like:
Watch All of 2015’s Weather in Super High-Def
El Niño Is Here, So Why Is California Still in Drought?
What You Need to Know About Zika And Climate Change
Europe Probes Wood Energy Market, Climate Impacts