Warming Temperatures Could Dry Out One Third of Planet

Warming temperatures, scientists say, can tip places into drought conditions by increasing evaporation and sapping soil of its moisture. A new study suggests up to a third of the Earth's land area could be subject to drier conditions because of warmer temperatures, not just changing precipitation patterns, by the end of the century.

The study finds that one of the agricultural heartlands of the United States, the Central Plains, could become drier, even though it may not receive less rain in the future, simply because warmer temperatures will drive evaporation to dry out the rich soils. Drier soil makes it harder to grow the food that feeds the country, which can have knock-on effects on trade and national security. And the problem isn’t limited to the U.S.: Western Europe and the fertile fields of southeast China show the same drying trend, the study, detailed in the journal Climate Dynamics, found. 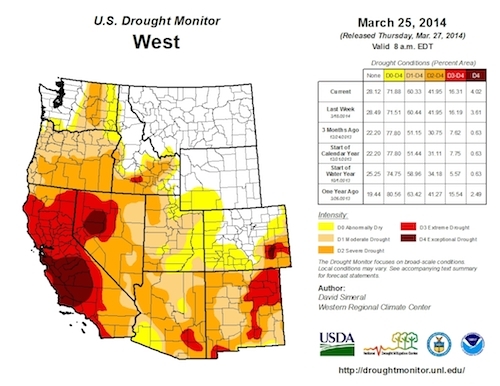 Issues of future drought, food security and its potential effects on conflict were a focus of the latest report from the Intergovernmental Panel on Climate Change, which examined the impacts of global warming that may come to pass if societies don’t adapt and cut their emissions of greenhouse gases.

Climate models using the so-called business-as-usual greenhouse gas emissions scenario, which assumes no effort to curb emissions, found that increased evaporation “not only intensifies drying in areas where precipitation is already reduced, it also drives areas into drought that would otherwise experience little drying or even wetting from precipitation trends alone,” the authors wrote. That would potentially push up to 30 percent of Earth’s land area into drought, compared to the 12 percent precipitation trends alone would affect.

“You can probably expect a much drier future in many areas” because of warming-fueled evaporation, said study author Ben Cook, a climate scientist with Columbia University’s Lamont-Doherty Earth Observatory and the NASA Goddard Institute for Space Studies, both in New York.

Precipitation and drought are on opposite sides of the “water equation”—that is, precipitation puts water into the soil and warming-influenced evaporation takes it out. These effects have been known, but Cook and his team wanted “to really figure out how important is the warming going to be for future drought,” he said.

“Everyone talks about it, and on a basic level the physics makes sense,” but the team wanted to figure out where it would play a significant role, Cook told Climate Central.

The U.S. Central Plains and southeast China showed signs of that long-term drying trend in the models, and these are “two regions where if you just naively assume that it’s just precipitation that matters,” that drought signal might not show up, Cook said. Even if rain is falling, increased evaporation can mean that “you’re still emptying that soil moisture bucket more than you’re filling it up,” and getting an overall drying trend, he said.

The drying trends shown in the models are long-term ones that would affect the underlying climate over which year-to-year variations will still cause wetter and drier years, like the one currently plaguing California.

Assessing the particular role that global warming is playing in a specific event like the ongoing drought out West is tricky and scientists can’t quickly quantify the effect, but they can say that that drought is “happening in a background climate that’s much warmer,” Cook said.

In fact, March-February temperatures in California are “alarmingly going up,” said Richard Heim, a meteorologist with the National Climatic Data Center who wasn’t involved in the study. As of February 2014, California had the warmest 12-month stretch on record (back to 1895), he said, which aggravates the drought issue. 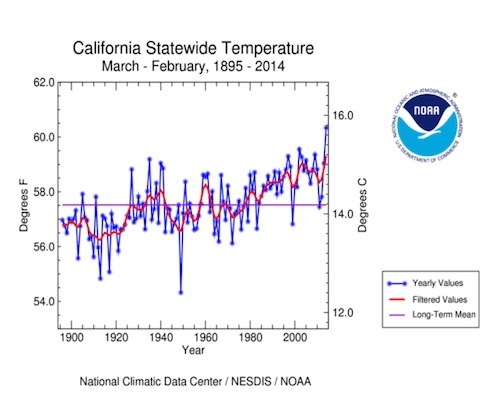 The trend of statewide temperatures in California from March to February of the next year.
Credit: NOAA NCDC

Heim said the conclusions of the study are consistent with what others have found and with his own observations. He said his reaction to it was, “yeah, wow, it confirms what I’ve been seeing over the last 25 years.”

The California drought is affecting some of the country’s other key agricultural areas, but the long-term effects of this particular drought on the future are uncertain. However, when an underlying warming trend is seen in places like the Central Plains, it can create concerns for future food security.

Future projections of precipitation changes show that the areas of North America that will receive increased precipitation, and so could become new agricultural areas, are parts of Canada where ancient glaciers stripped away many of the rich soils that they left behind in the Great Plains, Heim told Climate Central. These areas may not be as productive as those currently being ploughed, though, which could create issues with the regional and global food supply.

Such broad changes in climate affecting the food supply contributed to the collapse of past civilizations, such as the Maya, “so this can be a serious problem in terms of its impact on civilization,” Heim said.

The Department of Defense has conducted studies into the potential security risks posed by the effects of large-scale drying trends on the food supply within countries and trade in food between countries, Heim said. The IPCC report also highlights such concerns and emphasizes a need to adapt current policies to deal with such future impacts.

Overall, Cook said that their new study underscores and is consistent with the statements in the IPCC report and emphasized the extent of future drought that can still be expected, given the larger uncertainty for changes in precipitation than for those in temperature.

“We’ll see what happens in the future, but we certainly don’t expect it to get better,” Cook said.