Warming is Sending Mountain Glaciers ‘Off a Cliff’ 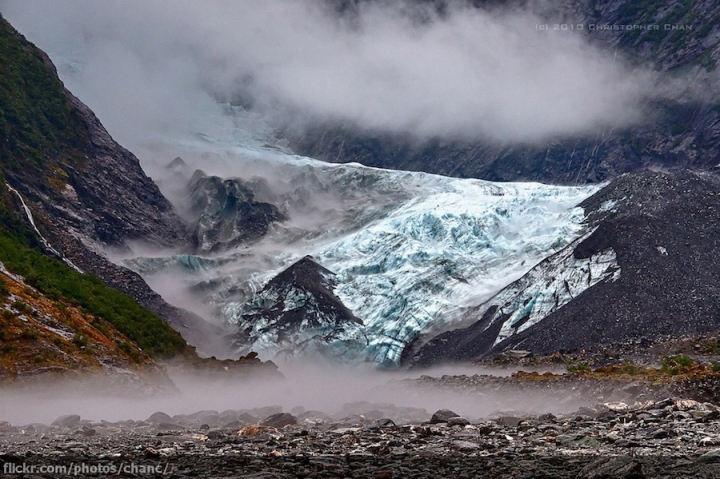 Franz Josef Glacier in New Zealand, one of the glaciers whose retreat is almost certainly linked to global warming.
Click image to enlarge. Credit: Christopher Chan/flickr

But while scientists could draw a line from human-caused warming to glacier loss on a global scale, attributing any one glacier’s retreat to climate change has been difficult because of relatively short records and glaciers’ large natural variations.

In a new study detailed this month in the journal Nature Geoscience, researchers have figured out how to link global warming to the retreat of individual mountain glaciers. They showed that for 36 glaciers with robust records, that retreat is “categorical evidence” of climate change, study co-author Gerard Roe of the University of Washington said during a press conference at the annual meeting of the American Geophysical Union held last week in San Francisco.

Other research presented at the meeting also illustrated the increasingly detailed view that scientists are getting of glaciers — often situated in remote, hard-to-access areas — thanks to improvements in observational technologies. Clearer pictures of how glaciers around the world are changing helps improve predictions of how everything from local water supplies to global sea levels could be affected as the glaciers melt.``

“We’re entering an era where our eyes are open,” Mark Fahnestock of the University of Alaska, Fairbanks said during a separate press conference presenting a new satellite database of near real-time glacier changes.

Glaciers are massive flowing rivers of ice, some of which terminate in glacial lakes or the oceans. The length of glaciers changes naturally in response to the competing influences of accumulating snow and summertime melt.

In a constant climate, or one without human-driving warming, in which accumulation and temperatures would fluctuate randomly, glacier length would also advance and retreat randomly in response.

Roe and his colleagues used statistical techniques to examine the changes to a set glaciers from all over the world with at least a century of length measurements, as well as nearby meteorological records to compare what would happen with and without warming. They found that with the warming trend, “the glacier basically falls off a cliff,” Roe said, its length substantially retreating.

The glacier is effectively amplifying the climate change signal, he said.

The team also examined the probability of seeing such dramatic retreats in a constant climate and found they would be extremely unlikely. For the 37 glaciers they looked at, there was a greater than 99 percent likelihood that the observed retreat wouldn’t have happened without warming for 21 of them. That likelihood was greater than 90 percent for all but one.

The results of the new study, Roe said, provide a “sobering perspective on how far out of equilibrium these glaciers are.”

Whether in Antarctica or Alaska’s Yukon, glaciers are often in remote places, which makes getting detailed observations of their movements and retreat very difficult, expensive and often dangerous, with researchers having to trek in equipment and negotiate obstacles like deep crevasses in the ice.

But technology is increasingly allowing them to get more refined views from afar. At the AGU meeting, scientists announced the creation of a new database of glacier measurements made by the Landsat 8 satellite, the newest in the Landsat series.

The satellite, which passes over the same spot every 16 days, can take more pictures that are more detailed than its predecessors, giving researchers a near real-time look at changes to glaciers all over the world.

“What we’re able to do now is track the flow of the world’s ice from pole to pole and on every continent,” Ted Scambos, of the National Snow and Ice Data Center, said during one of the press conferences.

The researchers have developed an algorithm that compares two pictures taken at different times, using stable parts of the landscape and characteristic patterns in the ice (like bumps or dune-like features) to track how far the glaciers have moved and therefore how fast they are flowing.

In Alaska, for example, the Landsat images can help glaciologists keep a closer watch on periodic glacier surges, whereas before they depended on the odd report from pilots who happened to notice that a glacier had made a significant jump. With the Landsat data, they can spot these surges sooner and watch them for longer and in more detail.

Another technology, called lidar, uses laser pulses that bounce off the landscape to get more detailed pictures of glaciers and their finer features. Ben Pelto, of the University of Northern British Columbia, has used lidar measurements to examine glaciers in the Columbia Basin of British Columbia and compared them to measurements taken on the ground. He found good agreement between the two, pointing to the usefulness of lidar in monitoring glaciers, he said at AGU.

These techniques can help scientists figure out which glaciers to go study on the ground, as well as how fast once land-bound ice is being dumped into the ocean and raising global sea levels. They can also be combined with atmospheric and ocean data to figure out what is driving changes in glacial flow and melt to better predict how they will evolve in the future.

Glaciers are “a critical bellwether for how Earth’s climate is evolving,” Scambos said.