In the summer of 2016, the global warming-induced retreat of Kaskawulsh Glacier — one of the largest glaciers in Canada — altered the flow of its meltwater so substantially that it killed off one river and shunted its waters over to another, an abrupt geological act known as river piracy. 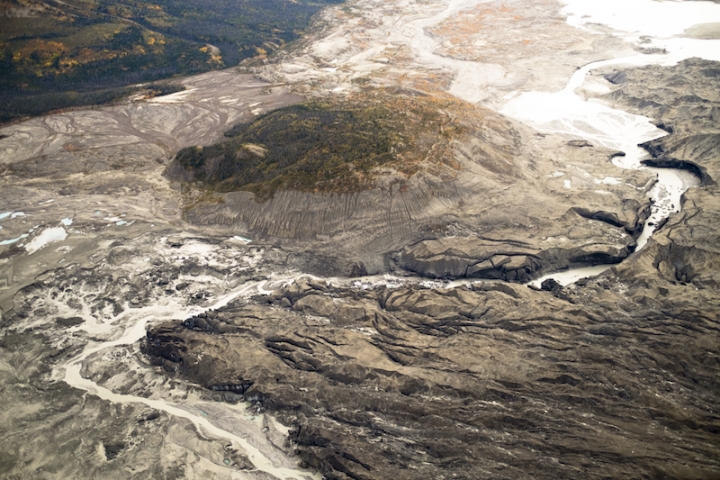 A stream flows through the toe of Kaskawulsh Glacier in Kluane National Park, Yukon. In 2016, this channel allowed the glacier's meltwater to drain in a different direction than normal, resulting in the Slims River water being rerouted to a different river system.
Click image to enlarge. Credit: Dan Shugar

A team of researchers were serendipitously on hand to document the upheaval, which likely marks a permanent change and could have substantial consequences for the ecology and surroundings of both waterways.

While river piracy, or stream capture, is known to have happened in the past because of swings in Earth’s climate, most of those examples were from thousands of years ago. This instance is the first attributed to human-caused climate change.

“This is one of the first examples of this that I’ve actually read about that’s been captured while it’s been happening,” said Rachel Headley, a glacial geologist at the University of Wisconsin-Parkside, who wasn’t involved with the work.

While much of the focus of studies on melting glaciers has been focused on their contributions to sea level rise, the new research, detailed Monday in the journal Nature Geoscience, shows that climate change can have unexpected impacts with potentially large consequences, the authors say.

Dan Shugar, a geomorphologist at the University of Washington Tacoma, and his colleagues set out last summer to continue research they had been doing in the delta of the northward-flowing Slims River, which is fed by meltwater from Kaskawulsh. But when they arrived in the remote area of the Yukon where the glacier is situated, they heard the river was unusually low. 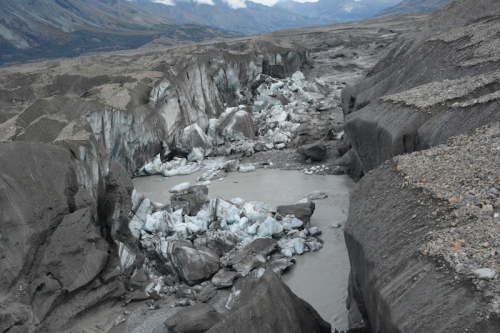 The channel in the ice, with recently collapsed ice blocks, that now carries the vast majority of glacier-front water down the Kaskawulsh valley and into the Alsek River.
Click image to enlarge. Credit: Jim Best

Even with that warning, though, “we were pretty shocked to see just how low it was,” Shugar said. Driving by it, “you could see the water level dropping day by day.”

Since the team had already invested the time and money getting to the area, they decided to dig into the mystery and see “who flipped the switch, so to speak,” he said.

The team went to the toe of the glacier, where the ice ends, and used a drone and GPS equipment to map the topography of the area. Combining that with streamflow data and decades of satellite images, they were able to piece together “the story, the timeline of what happened here,” Shugar said.

That story begins about 300 years ago during the Little Ice Age, when colder global temperatures caused glaciers around the world to advance. Prior to that period, Kaskawulsh Glacier’s meltwater had all flowed to the south, along what is now the Alsek River, because it was steeper and water will flow along the easiest path to the sea. 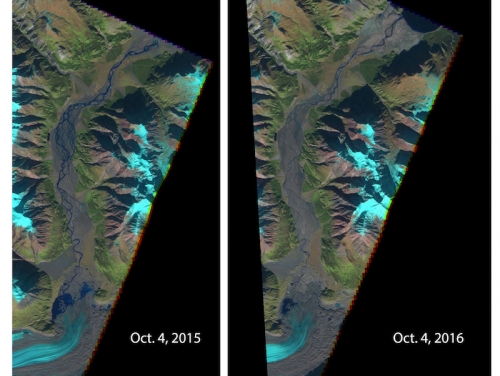 But as the glacier advanced, its tip “was like a giant foot that stood in the valley blocking that southerly route,” Shugar said, causing its meltwater to split into two flows. Some still flowed to the south and out to the Pacific Ocean, but a new northern route was created: now, the Slims River flowed into Kluane Lake and a river of the same name, which itself fed the Yukon River on its journey to the Bering Sea off the West Coast of Alaska.

Since the mid-1950s, though, Kaskawulsh has retreated some 2,150 feet and thinned considerably thanks to rising temperatures fueled by the increase of heat-trapping greenhouse gases in the Earth’s atmosphere. That long-term retreat combined with unusually warm temperatures in the spring and summer of 2016 likely caused strong melting.

The resulting meltwater cut a channel in the ice that connected the headwaters of the northward-flowing Slims to the southerly drainage and gravity took over.

The formation of the channel “essentially beheaded the Slims River,” Shugar said.

With the Slims’ flow greatly reduced, water levels in Kluane Lake dropped to 5.5 feet below their mid-summer average and 3 feet lower than they had ever been measured at that time of year.

The considerable drop in lake levels meant that access docks for cottages along the lake no longer reached the water, and the area’s First Nations people reported impacts to their traditional fishing areas, Shugar said.

The change, which Shugar and his colleagues think is likely permanent — given the unlikeliness of the glacier re-advancing in a warming climate — could have considerable impacts on the ecology of Kluane Lake and the Slims and Alsek rivers.

The lake could eventually be drained to the point where it no longer empties out of its northern outlet and becomes a “closed basin,” changing its circulation and water chemistry and impacting its flora and fauna. 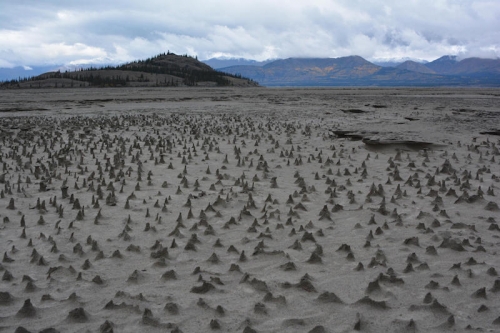 Sections of the newly exposed bed of Kluane Lake contain small pinnacles. Wind has eroded sediments with a harder layer on top that forms a protective cap as the wind erodes softer and sandier sediment below.
Click image to enlarge. Credit: Jim Best/University of Illinois

The Alsek River, meanwhile, will have to adjust to its larger flow. The river is a major whitewater rafting destination and guides reported that last summer “it was a really different river, much bigger than they’d seen,” Shugar said.

“It’s just really interesting to see these types of impacts” driven by climate change, Headley said. They are ones that “I don’t think are obvious to everyone” but could have major consequences, she said.

For now, Shugar and his colleagues are keeping an eye on the area and the changes that continue to build there.

It’s possible that geologists could find other examples of current climate-driven river piracy, though Shugar thinks the situation is a fairly unique one. Headley, though, said there could potentially be other examples in this area of the Yukon and Alaska, as well as possibly in the Southern Alps of New Zealand or the Himalayas, where glacial melt is a key water source for millions of people.

Overall, though, the story of warming-caused river theft gives scientists another heads up “that climate change is happening and may throw some curveballs,” Shugar said.

You May Also Like:
Early Heat Wave Bakes India, Sign of What’s to Come
NOAA Is Still Lacking an Administrator to Lead Agency
March Was Second Hottest on Record Globally