If you’d asked permafrost researcher Vladimir Romanovsky five years ago if he thought the permafrost of the North Slope of Alaska was in danger of substantial thaw this century because of global warming, he would have said no. The permanently frozen soils of the northern reaches of the state are much colder, and so more stable than the warmer, more vulnerable permafrost of interior Alaska, he would have said.

“I cannot say it anymore” he told journalists last month at the annual meeting of the American Geophysical Union in San Francisco. 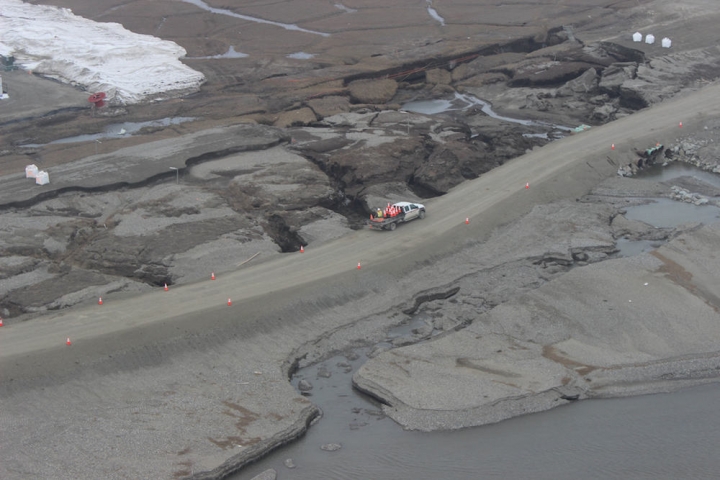 New work Romanovsky presented at the conference suggests that if warming isn’t tempered, more than half of the permafrost of the North Slope (a region bigger than Minnesota) could thaw by century’s end. Such a thaw would imperil infrastructure, local ecosystems and potentially release more heat-trapping greenhouse gases into the atmosphere.

Romanovsky has observed the substantial rise in temperature of permafrost that has already happened in the North Slope, as well as the damage caused to infrastructure when it thaws and causes the ground to collapse.

Permafrost is ground that stays frozen for at least two years, even through the relatively warm summer months. It is a part of life in the frigid North Slope, underlying buildings, roads and other infrastructure. When it thaws, it can cause considerable damage: During his presentation, Romanovsky showed photos of cracks running down buildings in Siberia and destroyed sections of the North Slope’s Dalton Highway, barely even recognizable as a road.

As permafrost thaws, it can also cause substantial changes in the local ecosystem, altering the flow of water atop and through the soil, as well as what plant and animal life can thrive in the area.

There are also major worries about the carbon locked up in the frozen soils, which can be released into the atmosphere as methane as the permafrost thaws, to enormous global costs. While methane is less abundant and shorter-lived than carbon dioxide, the main heat-trapping gas in the atmosphere, it packs a much larger warming punch on a molecule-by-molecule basis.

For all these reasons, scientists are trying to get a better picture of how Arctic permafrost will respond to Earth’s ever-rising temperature.

Temperature sensors sunk into the ground across the North Slope have showed a clear warming of the permafrost over the past three decades, even at depths of more than 60 feet.

What researchers, and Alaskan communities, want to know is if and when that temperature will rise above freezing. To look at this, Romanovsky and his colleagues used permafrost models that incorporated warming from two scenarios used in the latest Intergovernmental Panel on Climate Change reports. One assumes that greenhouse gas emissions continue unabated and another assumes that there is some mitigation, so that emissions level off by mid-century.

They found a “very, very dramatic difference” between the two scenarios, Romanovsky said. While both lead to warming and thawing of permafrost, the scenario where emissions are mitigated has substantially less. 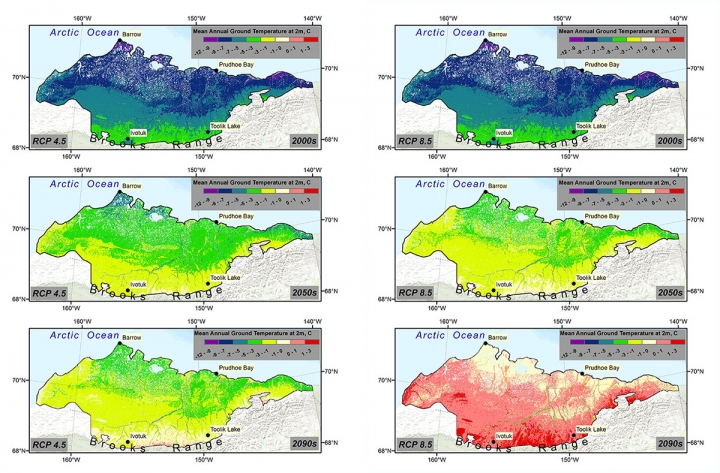 Potential changes in the mean annual ground temperature across Alaska's North Slope for 2010s, 2050s and 2090s under two scenarios. On the left is assuming greenhouse gas emissions level off by mid-century, while on the right, emissions are not mitigated. Click image to enlarge. Credit: Dmitry Nicolsky

Even with mitigation, the permafrost of the North Slope would be “much, much warmer than it is now,” Romanovsky said, but most of it would remain below that crucial freezing point. Without mitigation, more than two-thirds of that permafrost, down to a depth of more than 6 feet, could reach above freezing.

The layer of soil above the permafrost that melts and refreezes with the seasons would reach deeper in both scenarios, but would be much more dramatic without mitigation. In the scenario with mitigation, most of that layer would re-freeze in winter; without it, more than half of the permafrost area could permanently thaw down to a depth of 16 feet, the models showed.

“As a result of this thawing, the surface will be subsiding,” Romanovsky said. In the case of continued warming without limiting emissions, that subsidence could reach as large as several meters, he said.

Torre Jorgenson, a permafrost researcher with Alaska Ecoscience in Fairbanks who wasn’t involved with the study, isn’t convinced that the deep permafrost is as imperiled as the research suggests. Even if the permafrost reaches the freeze/thaw point, it will take a lot of heat to actually make the ice in the soil melt, he said. Added to that are complications like changes in vegetation and water flow that could act to stabilize the permafrost.

Romanovsky agreed that there are limitations with the models in terms of incorporating those kinds of influences, but said that they could also end up exacerbating permafrost thaw. He and other modelers are working to improve the models to incorporate more of these processes to help give a better picture of what will happen to permafrost as the world continues to warm.

But given the results of his research, he advised: “We probably should try to keep our climate within the more moderate scenario.”