Take a drive through the vast landscapes of the West anywhere between the Great Plains and the Pacific Ocean and much of the land you see, whether it’s the Grand Canyon or a Wyoming oil field, will be owned by the public and managed by the federal government.

Many of the 582 million acres governed by four federal agencies in 11 western states and Alaska are as rich in fossil fuels and renewable energy as they are biologically diverse and scenic, and that presents a challenge to the Obama administration as the planet warms. 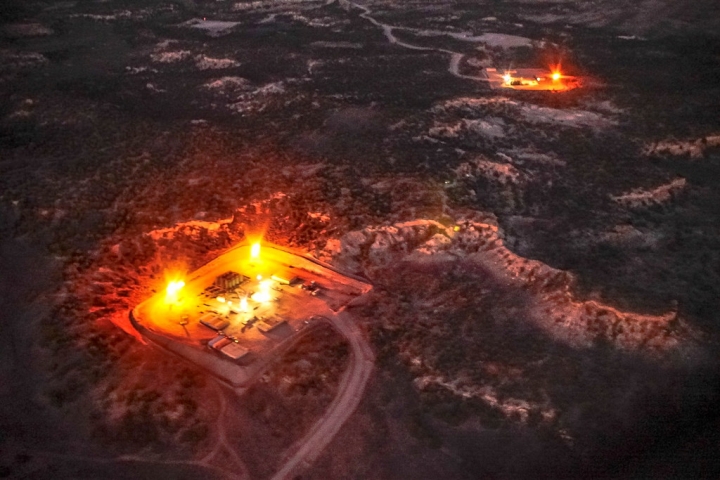 These natural gas wells in the San Juan Basin of northwest New Mexico glow as excess gas is flared from the wells.
Credit: WildEarth Guardians/flickr

Federal lands across the country are an important component in America’s fight against climate change in part because they protect forests that act as a carbon sink. But even as it seeks to rein in emissions, the federal government is being pressured to lease more public lands for oil and gas development.

“A decision to open an area to oil and gas development will have a direct impact on climate change because of the fossil fuels that are burned to develop the site and the methane gases that are often released during development and production,” Mark Squillace, a natural resources law professor at the University of Colorado-Boulder, and environmental attorney Alexander Hood wrote in the Lewis and Clark Law School Environmental Law Review.

Though some scientists and environmentalists are urging the Obama administration to close off all federal public lands to oil and gas leasing because they see it as a cause of climate change, U.S. Energy Secretary Ernest Moniz said in an August news conference that the administration wants to keep the land available for oil and gas leasing and development to bolster U.S. energy independence and reduce oil imports. 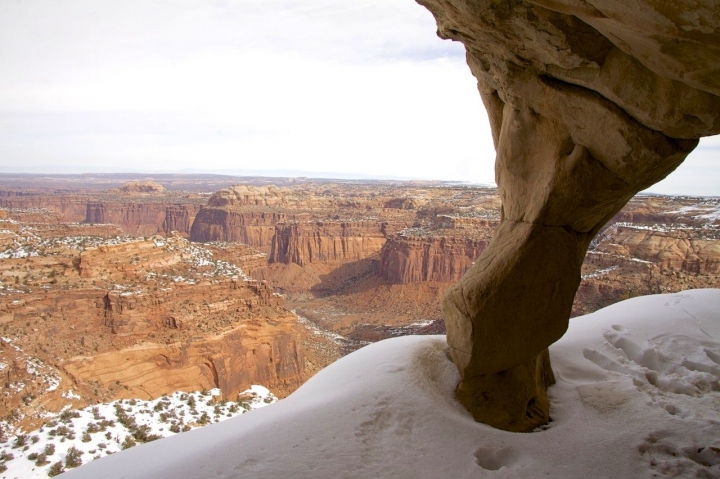 Aztec Butte in eastern Utah's Canyonlands National Park looks out onto land outside park boundaries that is part of a U.S. Bureau of Land Management plan for regional oil and gas leasing.
Credit: Bobby Magill/Climate Central

“These decisions are typically made by the Bureau of Land Management (BLM),” said Penn State University climate scientist Michael Mann, who signed a letter on Tuesday urging the White House to halt all oil and gas leasing on federal lands. “If you look at their official position, they give lip service to climate change, talking about the importance of facilitating renewable energy, encouraging energy efficiency and carbon sequestration projects, but they conspicuously avoid talking about the central problem — the continued extraction of fossil fuels.”

But uncertainty about how land management decisions affect the climate is a major challenge for those who plan for public lands’ future, said Mark Miller, the science chief for eastern Utah parks operated by the National Park Service, which is working with the BLM on new oil and gas leasing plans for that region.

No one knows exactly how global warming will alter temperature and precipitation in a specific area and how those changes will alter the landscape, he said. And, he added, it’s unclear how certain kinds of decisions, including permitting oil and gas development, which can disturb soils and contribute to blowing dust that can melt distant mountain snowpack, can affect the climate.

“It’s just primarily an issue of uncertainty — that climate change is another layer of complexity on top of all the other stressors that all the other park managers are faced with managing against,” Miller said. 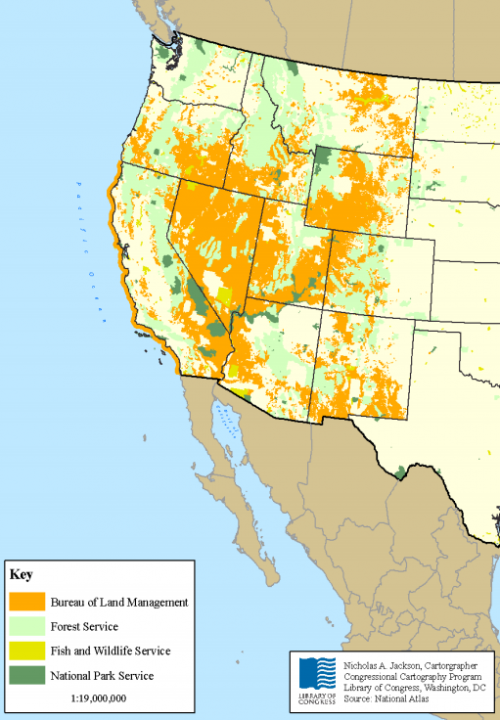 The federal government owns and manages millions of acres in the 11 Western states.
Credit: Congressional Research Service/Library of Congress

The federal government considers climate change and greenhouse gas emissions as only small factors in its decision to open lands for energy development. Oil and gas drilling is in high demand in regions such as eastern Utah, where Arches and Canyonlands national parks draw millions of tourists annually to a region also seeing fracking and other industrial development.

Crude oil production on federal lands across the West has increased 81 percent since 2008, BLM statistics show. Last year alone, the BLM, which presides over the federal mineral estate and more than 250 million acres of land in the West, approved about 4,400 oil drilling permits even as 6,000 permits for new wells remain unused.

The administration is working on at least two efforts to reshape how public lands are managed and developed for oil and gas. The plans cover millions of acres of public lands in the West where the public health impacts of emissions and a number of other environmental issues could conflict the oil industry’s drilling and fracking.

The plans don’t permit or address any specific oil drilling project, but are instead general guidelines for regional energy development, keeping some areas off-limits and placing environmental restrictions in other places.

One proposal playing out today is for land in eastern Utah, where the BLM is developing an oil and gas “master leasing plan” for 700,000 acres surrounding Arches and Canyonlands national parks and the Colorado River.

That plan was released in August for the Moab, Utah, area as part of a 2010 Obama administration oil and gas leasing reform initiative. It was developed to reduce conflicts between possible future oil and gas operations and concerns over wildlife habitat, air and water quality and proximity to national parks.

Other master leasing plans that have either been finalized or proposed close small amounts of land to leasing, or propose restrictions on new development. 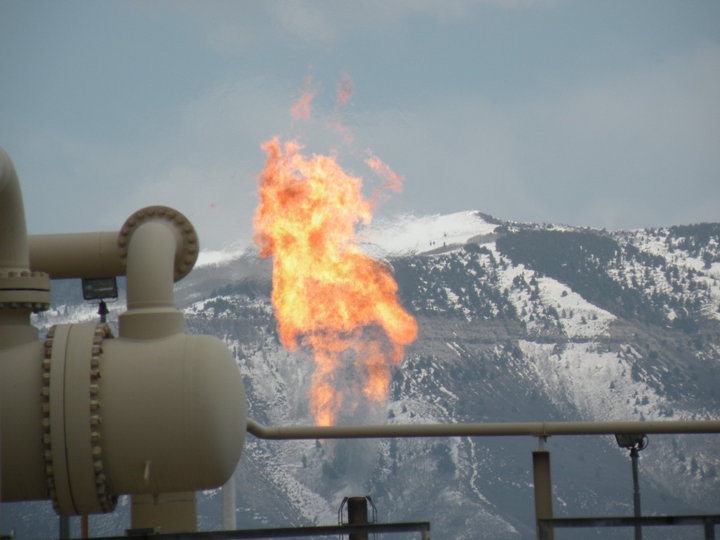 Natural gas drilling and fracking in the Piceance Basin of western Colorado often occurs on land under the domain of the U.S. Bureau of Land Management and has led to clashes between advocates for public lands preservation and the oil and gas industry.
Credit: Tim Hurst/flickr

Small reductions in the amount of public land open for companies to drill and frack is “huge for the region,” Martha Williams, an assistant professor of natural resources and climate law at the University of Montana, said. “When you’re looking at this national Obama administration thing — we’re really going to have to tackle climate change — does this do that? Ultimately, no. But you have to start somewhere.”

The BLM estimates possible greenhouse gas emissions that may come from oil and gas development resulting from a leasing plan, but those emissions are tiny in the context of a global problem.

Eventually, he said, the federal government may be required to more heavily consider climate impacts of oil and gas decisions, but not yet.

Squillace and others see the BLM’s master leasing plans as an opening for the federal government to factor climate change more heavily into its oil and gas leasing decisions on public lands.

“Master leasing plans could be a vehicle for the federal government to put a cap on total development in a particular area,” possibly capping greenhouse gas emissions, Squillace said.

“The good news is land managers are taking climate change into account more than they ever have, whereas it didn’t used to be part of the equation when you’re doing planning,” Nick Lund, senior manager for landscape conservation at the National Parks Conservation Association, said. “Now, land managers are at least considering the problem.”

You May Also Like:
Odds Increasing That 2015 Will Be Warmest Year
10 Years Later: Was Warming to Blame for Katrina?