The U.S. remains under the spell of an Arctic air invasion that began earlier this week, which means people started cranking up the heat in their homes for the first time if they hadn’t done so already.

But this winter is expected to be less frigid than the last one. The warmer temperatures could mean 10 percent less natural gas is used for home heating this winter if the forecasts are correct, according to U.S. Energy Information Administration data reported in the agency’s Nov. 12 Short Term Energy Outlook. 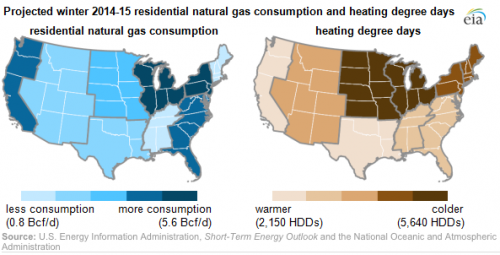 The map on the left shows the regions of the U.S. that use the most natural gas for home heating during the winter.
Credit: EIA

It’s anybody’s guess just how much warmer this winter will be over last year. But if the average temperature nationwide is 10 percent warmer than last year, as the National Climate Prediction Center has forecast, then the EIA projects that natural gas consumption would decline 17 percent and consumer costs would be 12 percent lower than last year.

Natural gas heats nearly half of all the homes in the U.S., but the fuel used for home heating varies widely by region.

Electricity is the dominant heating fuel in Southern states. Heating oil is a major heating fuel in the Northeast, and it’s almost entirely unique to that region, where 80 percent of all the heating oil used in the country is burned.

The coldest parts of the country are more likely to use natural gas for home heating than elsewhere, and the EIA has published a handy map that shows where most of those gas furnaces are.

Most natural gas used for heating this winter is expected to be burned in Ohio and the states bordering Lake Michigan, one of the coldest regions of the contiguous U.S. in the winter.

About 28 percent of all residential natural gas in the U.S. is burned there, EIA data show.

The Southeast burns a lot of natural gas, too, but not because it’s cold or even the dominant fuel there.

“Keep in mind the population,” Teller said. “It’s a lot colder in North Dakota, Montana, etc., but there are many more people and households in the Southern states. Per-household use of natural gas is much greater in the colder states than in the South.”

So, the winter chill is still going to force residents of Northern states to crank up the heat, but it’s likely they’ll be using less of it. And that’s good for both pocketbooks and the climate.