For the next three months, above-normal temperatures are favored across the U.S., from coast to coast and Mexico to Canada, as well as Alaska, according to government forecasts.

In archives that go back to 1995, that’s never happened, Dan Collins, a forecaster with the National Oceanic and Atmospheric Administration’s Climate Prediction Center, said.

While it doesn’t mean that a three-month-long heat wave is in store, or that there won’t be cooler spells here and there, it does up the odds that 2016 will rank among the hottest years on record for the country. It’s also a mark of the overall warming trend, courtesy of heat-trapping greenhouse gases accumulating in the atmosphere. 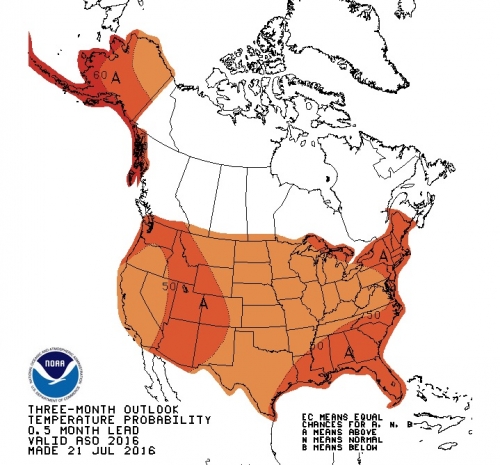 Probabilities for above-normal, below-normal, and normal temperatures across the U.S. for August, September, and October.
Click image to enlarge. Credit: NOAA

The most recent three-month outlook, covering August, September, and October, favors above-normal temperatures for every part of the Lower 48, as well as for all of Alaska.

Driving that outlook are the warm  sea surface temperatures across the globe, including in the Pacific, along the coast of Alaska, and in the Atlantic. The ocean has a longer memory for temperature than the land or air, so it tends to retain warmth for longer and influence atmospheric temperatures.

“The fact that globally there’s a lot of above-normal sea surface temperatures, that gives you some persistence of temperatures in the atmosphere,” Collins said.

There are some spots where the probabilities are a little lower, including along the West Coast and in the central part of the country. Those lower odds are because of the cooling of ocean waters along the West Coast after the end of the reign of The Blob of warm water that sat off the coast and helped fuel months of hot temperatures there, as well as the high soil moisture in the central U.S. When soil moisture is high, it tends to mediate temperatures.

Another reason that above-average temperatures are favored is the lack of a climate pattern like La Niña or El Niño exerting a clear influence. In the absence of those, the trend is for temperatures today to be warmer than those in previous decades because of human-caused climate change, Collins said.

And the trend of warmer temperatures across the U.S. is stronger for the August-through-October period “than virtually any other season,” he said. (The trends can be higher in other seasons for particular regions.)

Not a Heat Wave

The forecast doesn’t mean that a three-month-long heat wave along the lines of the one stretching across the country this week is in store. It doesn’t even guarantee that there will be more heat waves. But it does mean that “heat waves are more likely” and are more likely than cold snaps, Collins said.

There still could be below-normal temperatures in spots for periods of time over the next three months, particularly in those areas where probabilities are lower, but overall, the average temperature for those three months is expected to be above normal.

Rank of the average temperature of the Lower 48 for the first half of 2016.
Click image to enlarge. Credit: NOAA

That temperature outlook in turn increases the likelihood that 2016 will stay amongst the hottest years on record for the country. The average temperature of the Lower 48 is in third place through the first half of the year.

Because the outlook doesn’t say anything about how much warmer temperatures might be for the next three months, it’s difficult to say how they might change the annual ranking, CPC climatologist Jake Crouch said in an email. But with this outlook, “the year should remain near the top of the pack.”

Alaska is already having its hottest year on record by a fair margin, so continued above-average temperatures will likely continue that record for the next few months.