Christopher Columbus explored the New World during wildly tempestuous seafaring times. In the summer of 1502, during his final American voyage, for example, Columbus commanded his fleet to the shelter of an island, now home to Haiti, as a hurricane tore through. Three of the four ships broke anchor in the walloping winds.

New research shows that hurricane activity picked up along the American East Coast after 1400, following spikes in nearby sea surface temperatures of up to 3.5°F, before waning again late in the 1600s. Researchers who peered into mud to chronicle this and an earlier spike in hurricanes say such storms could become more common again as greenhouse gas pollution heats up the oceans. 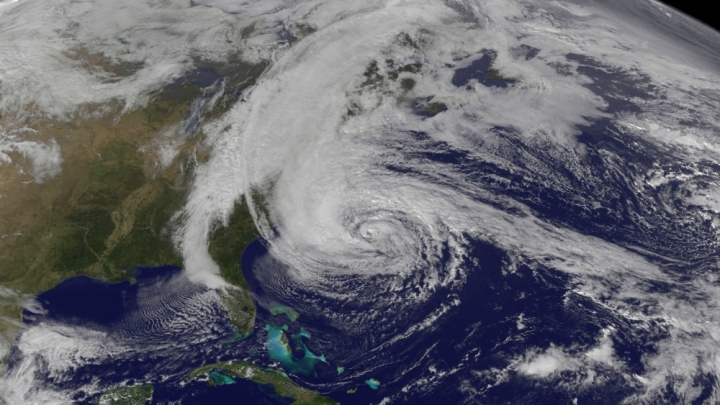 Hurricane Sandy as seen from a NOAA satellite.
Credit: NOAA

“The interval when Columbus is exploring the New World is this interval where we’re seeing increased hurricane activity along the eastern seaboard of the U.S.,” Jeffrey Donnelly, a Woods Hole Oceanographic Institution palaeoclimatologist, said. Donnelly led a team of researchers who pinpointed the hurricane peaks after examining 2,000 years worth of storm-thrown sand, which washed from the ocean into a Massachusetts salt pond, settling as layers of sandy sediment that was sandwiched between layers of ever-accumulating mud. The group also examined findings from similar research, which was conducted using samples from a nearby marsh, that was published in 2010.

Writing in Earth’s Future, an American Geophysical Union journal, the researchers concluded that both hurricane peaks coincided with periods when surface waters of the Atlantic Ocean were hotter than normal. This is perhaps unsurprising, since hot seas provide energy needed to fuel hurricanes. But it’s concerning, because similar sea surface warming is now well underway as greenhouse gas pollution heats up the globe.

Last year was the globe’s hottest on record, and most of the heat trapped by greenhouse gas pollution ends up in the upper levels of the oceans. That marine heat is helping to power storms and, because warmer water expands and can melt ice, it’s raising sea levels, which worsens flooding caused by storm surges.

The first spike in hurricane activity whose existence was forensically gleaned from the Massachusetts mud lasted for a full millenium — from the second century, back when the Roman Empire was still being established, through to 1150. The second spike began in 1400 and it didn’t ease until 40 years after the Great Colonial Hurricane of 1635 destroyed homes and felled trees in nascent New England settlements and triggered a 14- to 20-foot storm surge in some places. 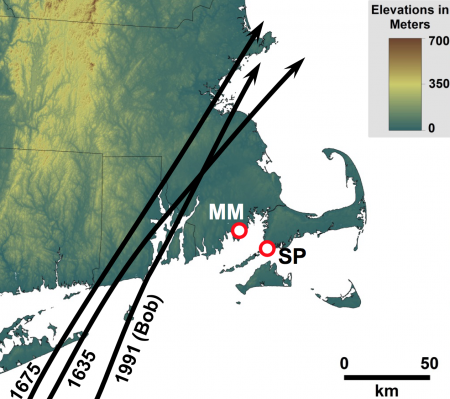 Donnelly’s team examined cores of sediment sampled from two of the salt pond’s deepest points, searching for layers that were deposited when storms violently washed ocean sand into the 65-acre waterway. Storm dates were determined by matching key markers in the sediment samples with known events; rye pollen started to appear after Europeans colonized the region, for example, and exotic caesium isotopes settled in the pond following nuclear weapons tests. This allowed them to construct a history of hurricanes affecting the site, which was compared with reconstructions of changing ocean temperatures over the same period.

The researchers can’t tell from the evidence that they studied whether hurricane activity died back in the Atlantic from 1150 to 1400, or whether hurricanes simply formed and blew further from coastlines during those 250 years. What the researchers do know, however, is that both peaks hit before humans began warming the planet with climate-changing levels of greenhouse gases.

“There were these really active intervals — much more active than we’ve seen in the last couple hundred years — that the climate system was able to generate without our interference,” Donnelly said. “In both cases, there seems to be this association with warmer sea surface temperature, whether it be in the deep tropics or off the eastern seaboard of the U.S.”

They say their findings have implications for a warming planet. They could foretell historically unprecedented strings of storms in the Atlantic basin’s climate-changed future, some of which would make Hurricane Sandy, which killed 72 people and caused an estimated $50 billion damage in the U.S. alone, seem like a storm in a teacup. 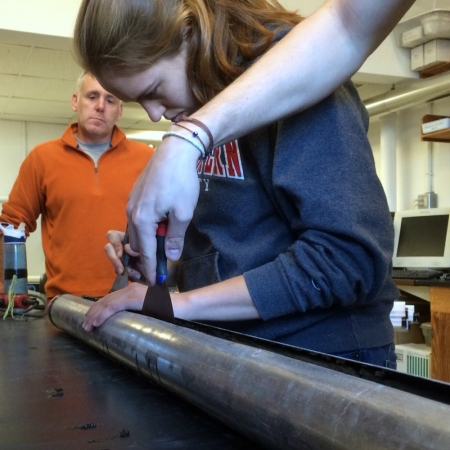 Margaret DiGiorno helps open a sediment core in the WHOI laboratory of Jeffrey Donnelly, who is watching.
Credit: John Upton

“Sandy was barely a hurricane when it made landfall,” Donnelly said. “The storms that we’re talking about here are much more intense. They’re category 3 or perhaps even category 4 hurricanes. In one of these events, not only do you have the flooding, but you have the wind damage.”

Kerry Emanuel, an atmospheric sciences professor at MIT who studies the relationship between climate change and hurricanes, said deducing hurricane activity from sediment such as this is a “well-established technique.” He was not involved with the new study, which he said “presents an unusually well-resolved record of overwash deposits.”

That’s because local increases in sea surface temperatures are more effective in fueling storm intensity than are planet-wide increases. “But other research, based on theory and models, suggests that, in general, we may expect stronger storms.”

You May Also Like:
What If Sandy’s Surge Swamped Washington, D.C.?
Winter Is Losing Its Cool
EPA: Keystone XL to Emit 1 Billion Extra Tons of GHGs
Farming Now Worse For Climate Than Deforestation
Obama And Modi Are Buddies, But Will The Climate Care?