What a Warmer Future Means for Southeastern Wildfires

When Jeff Prestemon stepped outside his home near Raleigh, N.C., last Friday around 9 a.m., the skies were clear, the air “perfectly breathable.” But just an hour-and-a-half later, the winds had shifted, drawing with them the smoke from regional wildfires.

“It was putrid,” Prestemon, a research forester with the U.S. Forest Service, said. “It stung my eyes, it made my nose run.” 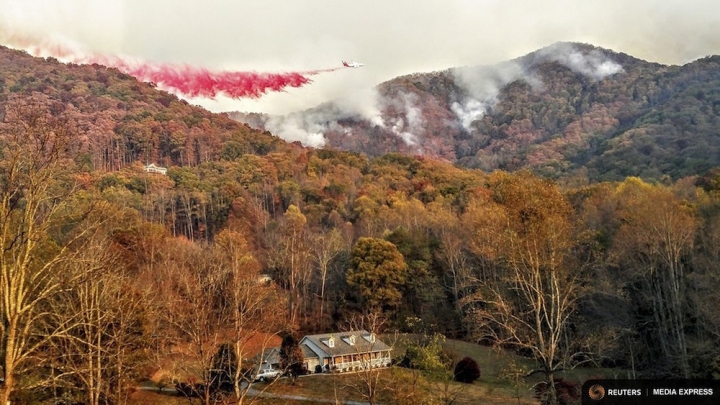 For several weeks, residents of the Southeast have contended with hazy skies, a pervasive smell of fires and dangerous air quality thanks to the smoke emitted by dozens of wildfires that have burned tens of thousands of acres in the region, particularly around the southern Appalachians.

Tinder-dry conditions that have resulted from months with little to no rain and toasty fall temperatures have allowed the fires to reach unusual heights.

With all signs pointing to continued dry conditions — possibly through the winter thanks to a La Niña — those wildfires could burn for weeks or months and the risks that new fires will start is high.

But the picture for future regional drought and wildfire risk as global temperatures rise is a murkier one, experts like Prestemon said. This year’s exceptional conditions may not become the norm, but because of rising temperatures, they may be more likely to occur in the future when the right ingredients come together.

‘A Carpet of Fuel’

Nearly three dozen large wildfires are burning across seven states in the Southeast, charring a total of more than 100,000 acres. The fires in the worst-hit states, Georgia and North Carolina, have burned about 45,000 acres in each state.

Thousands of firefighters have descended on the region to quash and contain the flames at the cost of millions of dollars. In the meantime, residents even hundreds of miles away have had to deal with air quality alerts and curb their outdoor activities as shifting winds spread the fires’ smoke.

While the Southeast is no stranger to wildfires, the number so far this fall is “many, many more than what we normally have,” Chip Konrad, director of the Southeast Regional Climate Center, said. And the sheer scale of some of them is far larger than is typical for the Appalachians.

The Southeast often experiences a secondary fire season in the fall, as October is typically the driest month of the year for many parts of the region. But the bone-dry conditions this year have added considerable fuel to the flames.

Maps of U.S. precipitation over recent weeks show a big hole over the parched Southeast. Even November, when storm systems normally start moving through again, has seen nary a drop in some locations.

“Unfortunately, we’re halfway through the month and it continues to be bone dry,” Konrad said.

Several locations have set records for consecutive days without any measurable rain: On Nov. 21, Tuscaloosa, Ala., ended a stretch of 65 dry days, beating its previous record of 37, according to the SERCC. Cedartown, Ga., has gone an astounding 94 days, crushing its previous record of 36. Asheville, N.C., is still maintaining its streak of dry days, counting 32 so far. Its record is 39.

Every Monday I check the 7-day QPF first thing, every Monday the same thing for the Southeast….#drought pic.twitter.com/JuRegmFzHO

But not only have conditions in the Southeast been dry, they have been exceptionally warm. Numerous locations around the region are having their warmest fall to-date, according to the SERCC. That heat has helped lead to more evaporation from soils and transpiration from plants.

The combination of drought and heat means that the fall leaf litter is “just so dry,” Konrad said. “It’s a carpet of fuel.”

So when lightning strikes or a person, whether intentionally or accidentally, creates a spark, conditions are ripe for fire to surge. Numerous counties have instituted burn bans to curb accidental fires.

What climate change might mean for drought and wildfires in Southeast in the future is a tricky question. Unlike some areas of the country, like the Southwest, climate models differ on how overall precipitation in the region might change as temperatures rise.

Those rising temperatures are the clearest tie-in with climate change for future drought. “Most definitely we’re seeing an increase in the frequency of above-normal temperatures,” Konrad said.

Record-high temperatures are currently outpacing record lows by more than 2-to-1 across the contiguous U.S., and a recent study suggests that ratio could balloon to 15-to-1 by mid-century if emissions of the greenhouse gases driving global warming aren’t curtailed.

More days of high heat means that when the region does see a drop-off in precipitation, “you can go into drought more quickly,” Konrad said. Some of that effect was seen in late summer and early fall this year, as the drought in the Southeast rapidly deepened and expanded.

Some of the same factors that limit what can be said about future droughts also limit projections of future wildfire risk.

“There’s so much uncertainty on the precip that it’s really hard to say what the future’s going to be,” Prestemon, of the Forest Service, said.

Wildfires are also very complex, with myriad factors contributing to them. A study published earlier this year and led by Prestemon used both climate models and projections of societal changes, like population growth and development, to look at how they might impact wildfire projections.

They found that societal changes suggested a small reduction in the area burned by human-caused fires (which account for the bulk of wildfires in the Southeast) by mid-century, likely because development reduced the amount of forests and created more breaks that could stop the spread of fire. Conversely, changes in climate suggested lightning-started fires would burn larger areas.

Prestemon stresses that the findings aren’t a forecast, merely a look at what’s possible and how different factors influence wildfire activity.

But, as with drought, the fact that temperatures are steadily rising and making extreme heat more common could make wildfires like these more likely to occur in the future with the right conditions.

Flew over a wildfire in the Appalachians. Smoke was trapped in the valleys on either side of the ridge. pic.twitter.com/f2Zj8dmZnT

When drought occurs in the future, that added temperature boost means such droughts will be worse, meaning any fire that does start is going to have more fuel so “it’s going to be worse,” Prestemon’s co-author, Don McKenzie, of the Forest Service’s Pacific Wildland Fire Sciences Lab, said.

But it doesn’t mean that years like this one become the norm, he cautioned.

In the more immediate future, the dry conditions and accompanying wildfires will likely be around for several more months. With a weak La Niña in place, the odds favor drier-than-normal winter conditions across the southern tier of the U.S. The National Oceanic and Atmospheric Administration’s drought outlook expects the drought in the Southeast to persist and expand.

“There’s no suggestion that we’re going into a wet pattern,” Konrad said. If winter precipitation doesn’t materialize, he added, “we’ll be in incredibly bad shape in the spring.”