A plant which is a staple food crop for millions of people across Africa is at risk from disease as regional temperatures rise, scientists say.

The plant, cassava, is a significant source of food and income, and is an important industrial crop, and there is concern that serious food shortages may result and poverty worsen.

Experts say the spread of the disease could halve cassava production and threaten the diets of 300 million people. 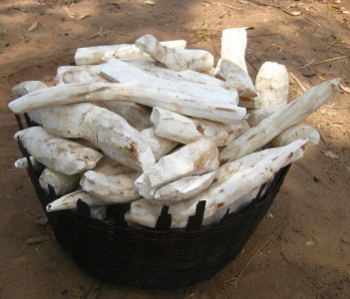 Experts say the spread of the disease could halve cassava production and threaten the diets of 300 million people.
Credit: Tom Rulkens

The disease responsible, Cassava Brown Streak Disease (CBSD) is transmitted by insects whose numbers are surging, with rising temperatures thought to be one of the factors causing the increase.

CBSD was first identified in East Africa in the 1930s. It is deceptive, because an infected plant’s leaves may continue to look healthy while the roots beneath are being destroyed.

It is only when the roots are dug up and found to be streaked with brown that farmers know their crop is infected. The roots are rich in carbohydrates and are used both for food and to make starch, flour, biofuel and beer.

New outbreaks of CBSD have been reported recently in the Democratic Republic of Congo — the world’s third largest cassava producer — and Angola.

If it spreads to West Africa that will be especially serious. Nigeria alone now produces 50 million tons of cassava annually and plans to use the crop widely in its agricultural and industrial development.

“Cassava is already incredibly important for Africa and is poised to play an even bigger role in the future, which is why we need to move quickly to contain and eliminate this plague,” says Claude Fauquet, a scientist at the International Center for Tropical Agriculture who heads the Global Cassava Partnership for the 21st Century (GCP21).

“We are particularly concerned that the disease could spread to West Africa and particularly Nigeria — the world’s largest producer and consumer of cassava — because Nigeria would provide a gateway for an invasion of West Africa where about 150 million people depend on the crop.”

To counter another viral scourge, Cassava Mosaic Disease (CMD), scientists developed varieties of the plant which are resistant to it. Unfortunately, though, the CMD-resistant varieties are not proof against Brown Streak Disease. 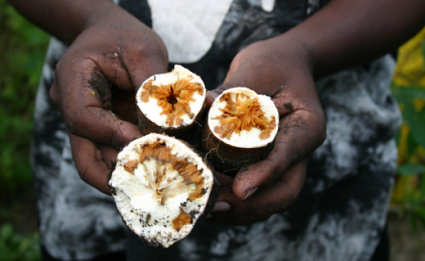 It is only when the roots are dug up and found to be streaked with brown that farmers know their crop is infected. The roots are rich in carbohydrates and are used both for food and to make starch, flour, biofuel and beer.
Credit: IITA, Dr. E. Kanju

Cassava has a reputation as a tough and resilient performer in conditions where many other crops cannot flourish, and so has been seen as a good way for farmers in sub-Saharan Africa to guard against the effects of climate change.

Research published in the journal Tropical Plant Biology found it could cope with the temperature rises of up to 2°C expected in West Africa by 2030, and would generally outperform six other crops — potato, maize, bean, banana, millet, and sorghum.

The report’s lead author, Andy Jarvis, said: “Cassava is a survivor; it’s like the Rambo of the food crops. It deals with almost anything the climate throws at it.”

“It thrives in high temperatures, and if drought hits it simply shuts down until the rains come again. There’s no other staple out there with this level of toughness.”

“The ideal situation is for farmers to have a diversity of crops, with cassava acting as a failsafe. This would enhance nutrition and reduce climate risk.”

But, in another twist of fate, it is rising temperatures which now threaten cassava because they appear to be one of several factors which are causing an explosion in whiteflies, the insects which carry the viruses that cause CMD and CBSD.

This, coupled with what scientists think are genetic changes leading to the emergence of “super” whiteflies, now means that large swathes of Africa face the prospect of intensified food insecurity.

“We used to see only three or four whiteflies per plant; now we’re seeing thousands,” said James Legg, a leading cassava expert at the International Institute of Tropical Agriculture. “You have a situation where human beings are competing for food – with whiteflies.”

Claude Fauquet says: “It’s time for the world to recalibrate its scientific priorities. More than any other crop, cassava has the greatest potential to reduce hunger and poverty in Africa, but CBSD and other viruses are crippling yields.

“We need to treat CBSD and other destructive viruses like the smallpox of cassava – formidable diseases, but threats we can eradicate if everyone pulls together.”