Voters in Colorado, Ohio Cities Say No to Fracking

Voters Tuesday in at least three Colorado cities and one in Ohio said no to fracking while similar efforts to ban fracking in two Ohio cities failed.

The oil and gas industry in Colorado spent more than $900,000 to try to defeat the measures on ballots in Fort Collins, Broomfield, Lafayette and Boulder that would have either banned fracking or placed a moratorium on it. Opponents of fracking spent about $26,000 to promote the measures. 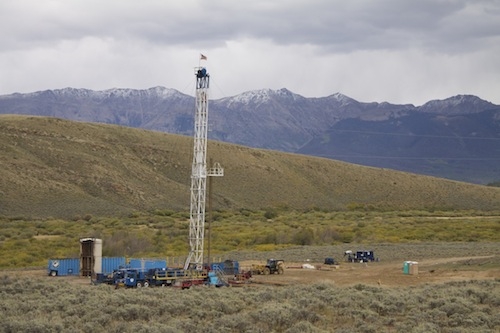 A oil and gas well being drilled in northern Colorado.
Credit: Bobby Magill

Voters in Fort Collins, Boulder and Lafayette, Colo., decisively banned or placed a moratorium on fracking, while a fracking moratorium in the city of Broomfield, north of Denver, failed by 13 votes, leading to calls for a recount.

A “community bill of rights” banning fracking in Oberlin, Ohio, passed, while two similar measures in Bowling Green and Youngstown, Ohio, were defeated.

The anti-fracking referendums came as many communities in oil and gas producing areas across the U.S. are becoming increasingly concerned about the possible environmental, social and climate implications of oil and gas development and hydraulic fracturing, or fracking.

The oil and natural gas boom that has been ramping up in Pennsylvania, Colorado, North Dakota, Texas and elsewhere in the U.S. over the past 5 years has been possible only because of advances in horizontal drilling and fracking technology. This boom has had the benefit of reducing U.S. greenhouse gas emissions, since burning natural gas to generate electricity produces fewer greenhouse gas emissions compared to coal. In 2012, U.S. carbon emissions related to energy consumption declined to its lowest level since 1994.

However, increased fracking for oil and natural gas may be resulting in more emissions of methane, which is a potent greenhouse gas. Studies of fracking-related methane emissions are ongoing, with some recent research finding that methane leaks at certain points in natural gas production and delivery may not be as significant as feared.

Fracking requires companies to inject high volumes of water, sand and chemicals deep into oil and gas-bearing rock formations, fracturing the rock to allow previously hard-to-reach hydrocarbons to flow to the surface.

The oil and gas boom has moved energy development into some residential and suburban areas, including north of Denver where city dwellers are seeing new oil and gas wells being fracked in their neighborhoods and near public schools. Concerned about the public health and environmental impacts of fracking, voters in Longmont, Colo., became the first in the state to ban fracking in 2012. In an unprecedented move, the state of Colorado responded with a lawsuit asserting that only the state has the right to regulate oil and gas development, even within city limits.

“This election sends a huge wake-up call to Gov. Hickenlooper that the people of Colorado do not want to be fracked,” Gary Wockner, director of a Fort Collins-based chapter of Clean Water Action, said in a statement Tuesday night. “Fort Collins’ vote is especially revealing — a decisive 10-point win in a swing county while being outspent 40-1.”

Supporters of a fracking ban in Broomfield say they’re going challenge the outcome of the election after losing by 13 votes.

“We’re going to pursue the hell out of that,” said Laura Fronckiewicz of Our Broomfield, a group critical of fracking in the Denver suburb. “I think the case has been made despite the outspending by the opposition. The fact is, this is dangerous, something you don’t want near your homes and your schools.”

The Colorado Oil and Gas Association (COGA) dismissed the votes in Boulder, Lafayette and Fort Collins as being out of the “mainstream.” Fort Collins is the fourth largest city in Colorado, home to a small oil field and part of a county often cited by national media as being a prime example of an electoral swing county in a swing state.

“The close election in Broomfield proves that common sense prevails in mainstream Colorado communities when it comes to energy production,” COGA President Tisha Schuller said in a statement. “In Broomfield, which was the only true swing community contemplating an energy ballot measure, the voters unofficially defeated an energy ban by 13 votes; the ban would have overturned tough and sensible energy regulations passed by the city council last September.”

BJ Nikkel, a consultant to the energy industry on its campaigns to defeat the anti-fracking ballot measures and a former Republican state senator from Larimer County, said the industry’s $900,000 spending to support fracking came only in recent months while groups opposed to fracking have been working in local communities for years.

She said she suspects that environmentalists’ long-term goal is to ban fracking statewide and the local elections represent the first steps toward that end.

“What happens in the future, I think this is Round 1,” Nikkel said, referring to the four confirmed cities whose voters have now banned or placed a moratorium on fracking in Colorado. “I think there will probably be more rounds to come.”

In Ohio, a fracking ban failed for the second time this year in Youngstown.

More fracking bans and moratoriums may well end up on ballots in other Colorado cities in the near future, but in 2014, anti-fracking groups may encourage voters to wrest some control over oil and gas development and give it to cities and towns, Wockner said.

Communities with energy development in their boundaries are concerned both about how close wells are being drilled to their homes and the impact on air and water quality and climate change, he said.

“I believe that local government should have legal authority to ban fracking, and we'll see what happens as we move forward,” Wockner said.

Related Content
Some Voters Taking on Fracking Nov. 5, But Is it a Trend?
Fracking Boom Leading to Fracking Bust: Scientists
Fracking May Be Polluting River with Radioactive Waste
Scientists: U.S. Climate Credibility Getting Fracked