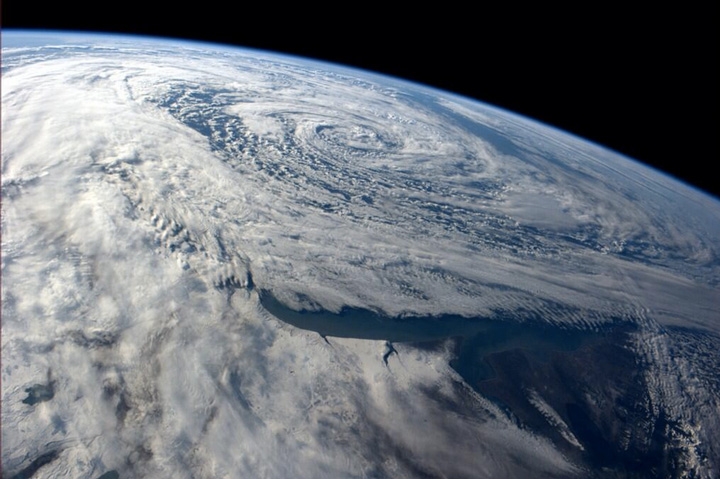 A storm of the southeastern coast of Argentina.
Credit: Reid Wiseman

Here’s your Friday afternoon diversion: a space station-eye view of a storm clipping Argentina’s southeastern coast with snow as fall fully turns the page to winter in the Southern Hemisphere.

The storm poses no major meteorological threat, though ski areas in Argentina have received up to 19 inches of snow from this and other systems in the past 48 hours. But the picturesque swirl and a view of the void beyond our planet certainly make it photo-worthy.

Another view from a global wind map shows winds moving in from the northeast and spiraling tightly towards to the center of the low-pressure system.

Animation of winds over South America. The red box shows the outline of a storm off of Argentina's coast.
Credit: Earth Wind Map

The photo evidence comes courtesy of Reid Wiseman, a NASA astronaut, currently serving as an engineer aboard the International Space Station. Since arriving on the orbital outpost on May 29, Wiseman’s followers on Twitter have more than doubled. Looking back through his timeline, it’s pretty easy to see why: His photos and updates about adjusting to life in space have garnered a huge amount of attention and comparisons to Chris Hadfield, the Canadian astronaut who rose to fame for his stunning photos, science videos and public engagement.

Luckily for those of us stuck on Earth, Wiseman’s mission aboard the International Space Station is scheduled to run until November so there’s a good chance of catching a glimpse of more views like this in the foreseeable future.

You May Also Like
Interactive Map Shows Details of EPA CO2 Emissions Plan
Global Warming Playing a Role in Australia’s Record Heat
No El Niño Yet, Still Expected This Summer
The Ocean is Heating Up for Hurricane Season