Climate Impact on Vermont May Have Benefits

On the heels of the release of the National Climate Assessment in May, which looked at the impacts of climate change in the U.S., Vermont has become the first state to take a similar look on a state-level scale — and some of the impacts to the Green Mountain state are surprisingly positive. 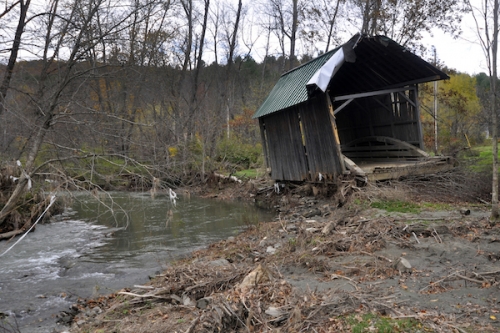 The Bowers Bridge in West Windsor, Vt., after Tropical Storm Irene lashed the state with rains that caused major flooding in 2011. The bridge was one of only two remaining Tied Arch design bridges left in the state.
Credit: Wendell Davis/FEMA

The overall message of the Vermont Climate Assessment is that the state is wetter and warmer than it was in the past and will continue down that path in the future, as greenhouse gases continue to build in the atmosphere and fuel global warming.

“Climate change is already happening in Vermont, that’s clear,” said Gillian Galford, a climate scientist at the University of Vermont and lead author of the report, which was released on Tuesday and modeled on the recently released National Climate Assessment.

The aim of the report — which used historical weather data, local knowledge and climate models “downscaled” to see regional impacts — was to alert Vermonters to the effects of climate change and allow them to better prepare for them, according to an overview of the effort. Some of those effects could be a boon for certain state industries, at least in the short term, but will come along with challenges that residents need to be ready for, Galford said.

The report found that the state’s average annual temperature had increased by 1.3°F since 1960, with nearly half of that increase occurring since 1990. The NCA found that the average annual temperature of the whole country had increased by 1.5°F since 1895, with more than 80 percent occurring since 1980. The Northeast was one of the regions found to be warming more than the national average in the national report. The most recent decade was the hottest on record for Vermont.

The warming hasn’t affected all seasons equally in the state, with winters warming twice as fast as summers. Spring is coming earlier and fall is beginning later: The growing season has lengthened by nearly 4 days per decade over the past 40 years.

Precipitation, too, has increased in the state — part of an expected trend across both the nation and the world in which already wet places become wetter and arid places become drier. Average annual precipitation across Vermont has gone up by 5.9 inches since 1960, with again nearly half of the change occurring just since 1990. 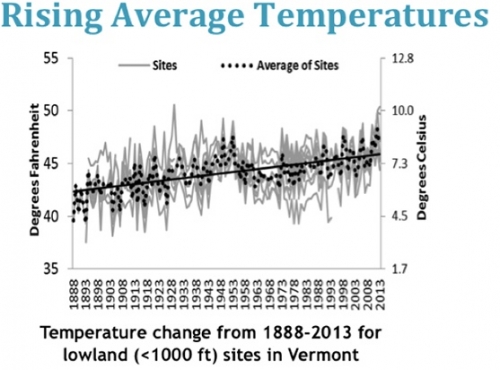 Temperature trends in Vermont from 1888 to 2013 from sites lower than 1,000 feet in elevation.
Click image to enlarge. Credit: Vermont Climate Assessment

Both trends are expected to continue into the future, with temperatures expected to be 2-2.5°F higher by 2050 and 5-5.4°F higher by the end of the century, according to model projections from the Intergovernmental Panel on Climate Change cited in the state report. While no specifics for rises in precipitation are given, the report said that much of the increase will come in mountainous areas where it will fall as snow at first, shifting to rain after a couple decades.

And when precipitation does fall, it’s expected to fall in heavier bursts, a trend expected the world over, as the amount of water vapor in the atmosphere increases as the air warms, providing more fuel for showers. In fact, the number of days with 1 inch of rain or more in Vermont was about five from the 1920s to the 1960s, but now “we’re constantly around 10 or higher,” Galford told Climate Central.

These shifts in the climate and weather of Vermont suggest a mixed bag of impacts on the landscape and economy of the state, the report found.

For example, in the short-term, that extra snow in the mountains could boost Vermont’s ski and tourism industries. Of course, when the snow shifts to rain, the ski resorts could suffer. Tourism could also benefit from a longer warm season, as those from southern states subjected to their own even higher temperatures look for an escape, the report suggested.

The impacts on agriculture could be more mixed: A longer growing season could mean larger crop yields, but could also mean more chances of diseases infecting crops. Warmer temperatures could also shift the types of crops grown in the state, opening the region to new wine grape varietals, for example, but they could also stress livestock. 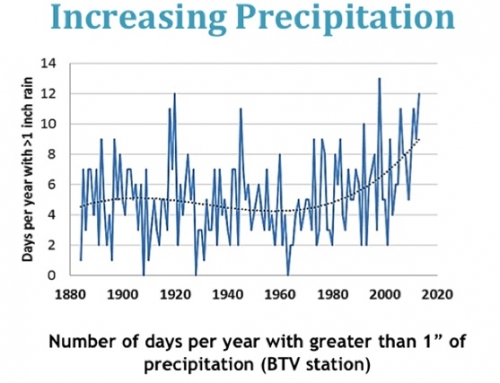 The number of days with more than 1 inch of rain at the National Weather Service office in Burlington, Vermont.
Click image to enlarge. Credit: Vermont Climate Assessment

When reviewing the initial findings for the report, many of the authors “were fairly surprised by the positive messages of climate change” for the state, Galford said. “Overall, things might not be that bad.”

And if the state can prepare for negative impacts, “we’re going to be better off,” she said.

For example, heavier rains are expected to bring more flooding, an issue the state is very familiar with after the devastating floods that swept the state when Tropical Storm Irene dumped rains across the region in 2011. In the wake of the disaster, the state has mandated that all towns develop a flooding contingency plan, and resiliency ­— a key concept in the Vermont Climate Assessment — has gained currency in the state, Galford said.

“I think we were shocked by Tropical Storm Irene, such that people are ready to do something,” she said.

Galford was quick to acknowledge that the relatively positive climate change message from the report may be particular to Vermont, and that the impacts of global warming “are going to be really different across the nation.”

“I think that Vermont is perhaps the exception,” Galford said.