How We Can Save Coral Reefs and Why We Should

Coral reefs are among the most beautiful ecosystems on Earth — “a jeweled belt around the middle of the planet,” in oceanographer Sylvia Earle’s words. They also are extremely valuable. Reefs cover less than one-tenth of 1 percent of the ocean floor but support more than 800 species of coral and 4,000 species of fish. They are spawning grounds, coastal buffers against storms and lucrative tourist draws. According to some estimates, the services they provide are worth up to $30 billion yearly. 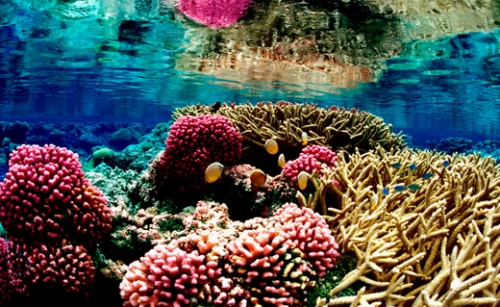 As oceans grow warmer and more acidic, scientists are developing new strategies to rescue the “rainforests of the sea.”
Credit: Jim Maragos/U.S. Fish and Wildlife Service/flickr

To the detriment of those benefits, however, coral reefs have been deteriorating  since the 1970s under a cascade of human impacts. Overfishing disrupts their complex communities of large predators, smaller prey species and “grazers” such as parrotfish and urchins that clean large algae off corals. Dredging for coastal development clouds water with sediment, blocking sunlight and depleting oxygen. Massive blooms of algae, fed by nutrients in farm runoff and wastewater, smother corals. Pathogens, possibly spread by global shipping, kill off corals and urchins.

Now increasing concentrations of carbon dioxide in the atmosphere are causing ocean waters to warm and making them more acidic. Warm water causes bleaching episodes in which coral polyps expel the microscopic algae that live inside their tissues and nourish them. Algae provide corals’ color, so the reefs turn white. Corals can recover, but the process stresses and may kill them. Acidification, which occurs as seawater absorbs CO2 from the atmosphere, reduces the amount of carbonate available for corals to build their skeletons, so reefs grow more slowly and become weaker.

But reef specialists aren’t giving up. Some are identifying characteristics that help certain corals tolerate warming and acidification. Others are conditioning corals to thrive in altered oceans, much as athletes train to compete at high altitudes or in harsh weather.

“We’re trying to counter the message that all corals are doomed,” says Ruth Gates, a research professor at the University of Hawaii’s Institute of Marine Biology. “Corals have been evolving on Earth for millions of years, and they’ve survived for good reason.”

Some experts say warming and acidification are receiving too much attention, and that local stresses are more urgent.

“We’re trying to counter the message that all corals are doomed.” — Ruth Gates

“Climate change is only half the story,” says Jeremy Jackson, former director of the Center for Marine Biodiversity and Conservation at California’s Scripps Institute of Oceanography. Jackson was lead editor of a report published in July by the Global Coral Reef Monitoring Network that found wide variations in reef decline rates across the Caribbean since the 1970s. While corals had declined by more than 50 percent regionwide since 1970, countries that restricted fishing, coastal development and tourism, such as Bermuda, suffered much less coral loss than those that failed to enact similar controls, such as Jamaica. And healthy reefs weathered hurricanes and bleaching episodes more easily than ones already degraded by overfishing and water pollution.

“Ironically, the United States spends lots of money on monitoring coral reefs, but doesn’t do much to protect them,” says Jackson. “Our strategy seems to be watching them till they die.”

In late August the U.S. National Oceanographic and Atmospheric Administration took a first step toward changing that, listing 20 coral species as threatened under the Endangered Species Act. The listing means that other federal agencies will have to consult with NOAA before they fund or authorize actions that would affect these corals, such as energy projects, pollution discharge permits, dredging, boat traffic or military activities. And NOAA will work with states and communities to protect the corals through strategies such as reducing land-based pollution and transplanting corals grown in laboratories to repopulate degraded reefs.

To counter warming and acidification, scientists are working to understand why some corals can recover from these stresses more easily than others. The answer lies in some combination of corals’ genetics and their relationships with the microalgae that live inside their tissues and supply them with food. 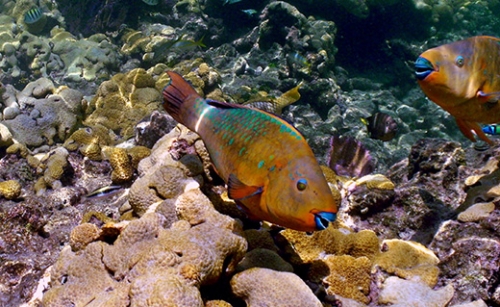 Some experts say warming and acidification are receiving too much attention, and that local stresses are more urgent.
Credit: Phils 1stPix/flickr via Ensia

In a study published in Global Change Biology in July, researchers led by Ohio State University biogeochemist Andréa Grottoli put healthy corals from nine Mexican reefs through two bleaching episodes one year apart. This process simulated conditions that could occur in the Caribbean as soon as 2030, according to current projections.

Some of their findings were surprising. Porites astreoides, a mounding yellow coral that is increasing in some parts of the Caribbean, was modestly affected by the first bleaching but did not fully recover after the second. Other types showed more ability to recover after repeated bleachings.

“What mattered was the size of the corals’ energy reserves, especially stored lipids,” explains Grottoli. “When we starve, our bodies metabolize fat, and other living things do the same thing.” High fat reserves helped corals survive until they could acquire new symbiotic algae. The study also showed that corals capable of partnering with multiple species of algae were more apt to recover.

Grottoli says findings like this could be used to site marine protected areas in zones where conditions favor resilient coral species. “I’d like to see a rethinking of how we define reefs that are worth protecting,” she says. “You need to know about how coral species behave and respond to stress to predict whether they will survive.”

At the University of Hawaii, Gates is also working to identify corals that can withstand climate stresses. In October 2013 she and Madeleine van Oppen, a senior research scientist at the Australian Institute of Marine Sciences, won a contest sponsored by the Paul G. Allen Family Foundation that sought strategies to address ocean acidification. Gates and van Oppen plan to develop corals that are highly resistant to climate stresses and use them to recolonize several sites, including a dead reef in Hawaii and a concrete artificial reef.

“I’d like to see a rethinking of how we define reefs that are worth protecting.” — Andréa Grottoli

To develop these super-corals, they are using three tools. The first is epigenetics — changes in gene function that occur when certain parts of an organism’s genetic code are turned on or off in response to environmental cues. “We’re bringing corals that we already know are robust into the lab and exposing them to conditions that they are likely to encounter in altered oceans: We increase water temperature or lower its pH, then bring it back to the starting point, sometimes in combination,” says Gates. “Exercise can turn on rapidly adaptive epigenetic pathways that encourage those high performers to be their very best.”

Second, the researchers are modifying corals’ symbiotic pairings with microalgae. “Some symbionts are always associated with very robust corals, so we’re seeing whether we can introduce them to corals whose symbionts are similar. Symbionts are corals’ food sources, and the robust ones are extremely good food factories,” Gates says. The third tool is to selectively breed hardy corals and freeze their sperm, bio-banking gains in resistance.

“Coral reefs are changing more quickly than corals can find each other and adapt naturally. It’s a time problem. So we are accelerating individuals’ ability to meet and reproduce,” she says. “It would probably happen naturally under benign conditions, but as corals die off, connections are broken, and sperm and eggs don’t meet as easily. We can watch the problem get worse, or propose something that will make a difference.”

The idea is analogous in some ways to assisted migration for animals and plants on land. In both cases, climate change is altering ecosystems faster than organisms can evolve. The ultimate solution is cutting greenhouse gas emissions, but in the short run, helping species adapt could mitigate the damage.