Critics of the Obama administration’s most sweeping climate policy hailed the U.S. Supreme Court’s decision in February to temporarily block it, saying the ruling on the Clean Power Plan could breathe new life into the flagging coal industry.

But even as those critics await further rulings on whether the plan is constitutional, utilities are already looking far beyond coal — the nation’s largest single source of greenhouse gas emissions driving climate change — and pressing ahead with investments in cleaner forms of energy, including renewable, natural gas and even nuclear power. 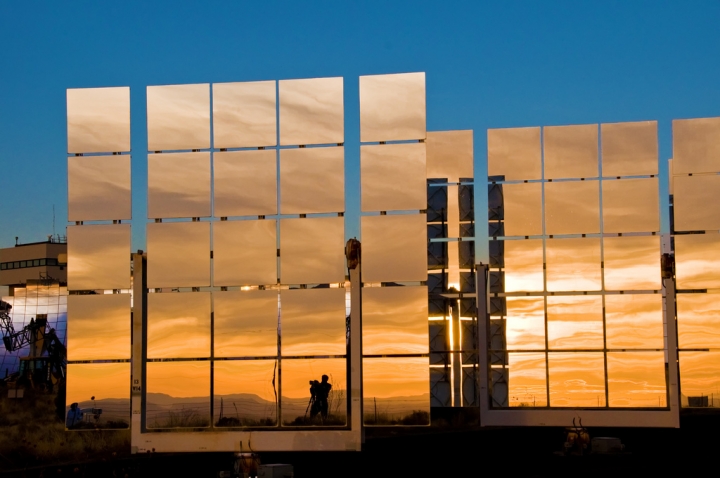 Solar power is growing faster in the U.S. than natural gas and wind in 2016.
Credit: Sandia Labs/flickr

“You don’t simply put the genie back in the bottle when it comes to major strategic investments that the captains of industry are making,” Quin Shea, vice president of environment for the utility trade group Edison Electric Institute, said after the court’s decision. Any potential legal reprieve for coal will have no bearing on the industry’s long-term goal to reduce carbon emissions in the electric power sector, he said.

Many states also had their own emissions goals and renewables standards encouraging utilities to look beyond coal, said Jackson Morris, director of the Natural Resources Defense Council’s eastern energy program and a former director of the Pace University Energy and Climate Center. Oregon, for example, passed a bill this week that would eliminate the state’s use of coal for electricity by 2030.

“You also had utilities seeing the writing on the wall and making decisions in the best interest of their shareholders. They’re not going to change because the stay was issued,” Morris said of the court’s ruling. “The Clean Power Plan is really locking in a transformation that’s already in motion.”

The coal industry and the 24 states suing to stop the Clean Power Plan say that the Obama administration is trying to “regulate the coal industry out of existence,” costing coal-dependent states such as West Virginia and Kentucky jobs. And, they say, the plan would force utilities to retire or upgrade existing power plants, high costs that will trickle down to residents, raising their monthly light bills.

“The decision adds to the growing recognition – by Congress and by more than half the states that are challenging EPA in court – that the Clean Power Plan is already creating economic havoc in the nation’s power grid,” National Mining Association President Hal Quinn said in a statement. “The costs it imposes will ultimately be paid by households, businesses and industries across the country.”

Jason Hayes, spokesman for the American Coal Council, said the group expects at least 30 percent of electricity in the U.S. to come from coal through 2040.

“There’s that old quote: ‘The story of my demise is somewhat overstated,’ ” Hayes said, referring to the coal industry.

But many utilities say that their momentum is clearly toward natural gas and renewables, and federal data reflect that. 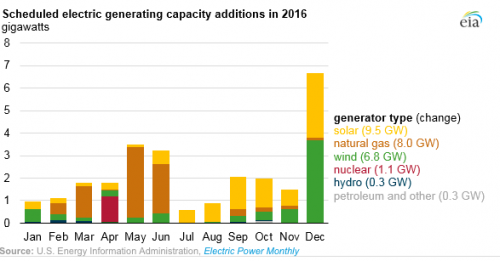 Forty-one coal-fired power plants are expected to be retired this year in the U.S., representing 88 percent — more than 5.3 gigawatts — of the 5.97 gigawatts of electric power generating capacity being taken offline this year, according to U.S. Energy Information Administration data. Most of the rest are tiny plants that run on crude oil or landfill gas.

The coal-fired power plants being shuttered are mostly being replaced by solar, natural gas and wind power plants. Of the 26 gigawatts of new power plants coming online nationwide in 2016, the largest share comes from solar — 9.5 gigawatts, or 36.5 percent. Natural gas comes in second, followed by wind and nuclear, according to the EIA.

Dawn Santoianni, spokeswoman for Charlotte, N.C.-based Duke Energy, the world’s largest utility based on market value, said that the company is committed to reducing emissions regardless of the legal outcome for the Clean Power Plan.

In the next five years, Duke plans to retire an additional 2.2 gigawatts of coal capacity, invest $4 billion in new natural gas facilities, and invest $3 billion in renewables, she said.

Tom Schmitz, spokesman for Pacific Gas and Electric, one of the West’s largest utilities and a major supporter of the Clean Power Plan, said California’s many environmental and climate regulations and emissions reduction mandates have been driving the company’s investments in renewables and natural gas for years.

“We have achieved a carbon dioxide emissions rate that is roughly two-thirds cleaner than the national average for electric utilities,” Schmitz said. “More than 50 percent of the electricity PG&E delivers to its customers comes from renewable or carbon dioxide-free sources.” 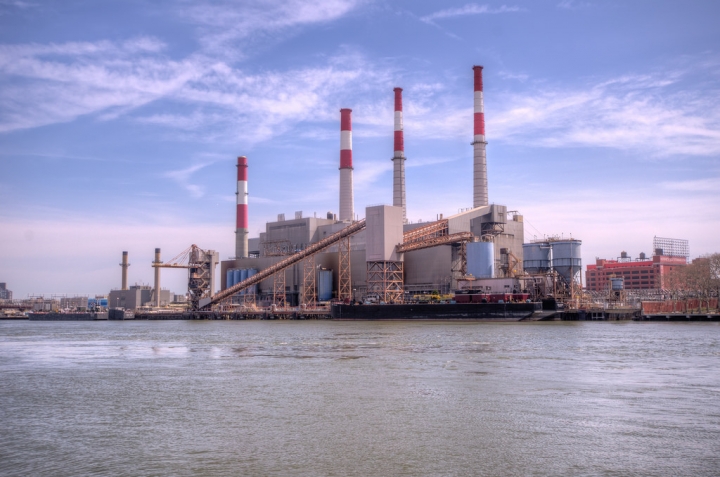 He said PG&E is on course to meet the California’s renewables goal of generating 33 percent of its power from renewables — excluding hydropower because the state does not consider hydro renewable — by 2020 and 50 percent by 2030.

Atlanta-based Southern Company, the country’s fourth-largest electric power utility, has reduced its coal power generation from 70 percent to 35 percent in recent years. The company is among those investing in what it calls “21st Century Coal,” which includes coal gasification plants and carbon capture and storage research, spokeswoman Meredith Leigh Knight said.

The company is building a coal gasificiation plant in Mississippi, which will transform coal into gas that generates electricity. The company says the $6.5 billion plant will reduce carbon emissions by 65 percent compared to a typical coal-fired power plant, but its critics say it could be one of the most expensive power plants ever built.

“As we have shifted from coal to gas, we have maintained the flexibility of our generating fleet,” Knight said. “Without federal mandates, the Southern Company system achieved greenhouse gas emission reductions almost 20 percent below 2005 levels.”

“Just from a business case, I don’t know how you can stand before your shareholder and say that’s a good strategy,” he said.

You May Also Like:
Climate Matters: Warming Seasons Across the U.S.
Every State’s Temperature Trend for Every Season