The U.S. Has Been Overwhelmingly Hot This Year

In a politically divisive year, there’s been one tie that has bound most of the U.S. together. We all live in the United States of Warming (USW! USW! USW!).

In all likelihood, the U.S. is going to have its second-hottest year on record, trailing only 2012. Every state is slated to have a top 10 warmest year and even at the city level, unrelenting warmth has been the main story in 2016.

Climate Central conducted an analysis of more than 1,730 weather stations across the Lower 48 that include daily temperature data up until Dec. 15.

A paltry 2 percent are having a colder-than-normal year. That leaves 98 percent running above normal. Not only that, 10 percent of those weather stations are having their hottest year on record.

Those record-hot places can be found from coast to coast. They include medium-sized cities like Asheville, N.C., Modesto, Calif., and Flint, Mich., as well as lesser-known locales like Neosho, Mo., Callahan, Calif., and Climax, Colo.

While some of the heat was driven by the super El Niño earlier this year, that alone doesn’t explain all the records being set, particularly in the latter half of the year after El Niño faded. Climate change has caused the U.S. average temperature to increase about 1.5°F since the 1880s.

Another area where climate change caused a shift is the number of record daily highs being set, and this year has been no exception. In November, record daily highs outpaced daily lows at a blistering 44-to-1 pace. For the year, that ratio is 6-to-1, with more record highs than lows set in every season. In a climate with no manmade warming, the ratio of record highs to record lows would be roughly 1-to-1. 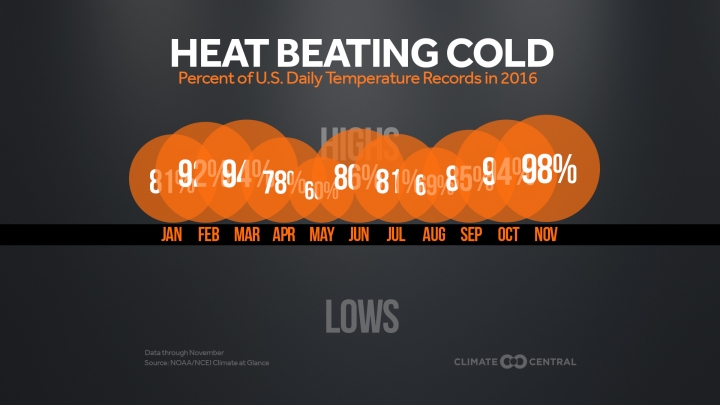 Record highs are outpacing record lows across the U.S. this year.

The ratio tipping toward more record highs than lows is one of the hallmarks of climate change as extreme heat becomes common. Rising background temperatures could mean that by mid-century, the annual ratio could approach 15-to-1, making winter cold a thing of the past and summers uncomfortably hot.

While the U.S. has been united by heat this year, it’s hardly a case of American exceptionalism. After all, the planet is just a few weeks away from wrapping its hottest year on record.

You May Also Like:
Warming is Sending Mountain Glaciers ‘Off a Cliff’
Temperatures Are Soaring at the North Pole . . . Again
Obama Bars Arctic Drilling Ahead of Trump Inauguration
Public Climate Information Threatened Under Trump