The U.S. is still cruising toward its second-hottest year on record going back more than 120 years, with every state in the Lower 48, as well as Alaska, recording well above-average temperatures through October.

This October was the third warmest on record, and 37 states had one of their five warmest January-October periods in the books, the National Oceanic and Atmospheric Administration announced on Tuesday. 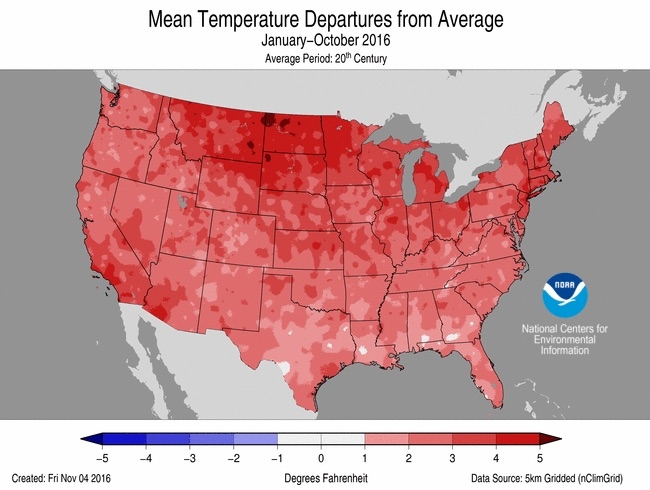 How temperatures across the U.S. differed from average from January-October 2016.
Click image to enlarge. Credit: NOAA

Those elevated temperatures have exacerbated the drought that has taken hold in several areas, particularly in the Southeast.

The near-record U.S. heat comes amid a year that will easily be the hottest on record for the planet as a whole, surpassing 2015. The excess heat trapped by ever-rising levels of greenhouse gases in the atmosphere is tipping the scales in favor of more record heat.

International negotiators are meeting this week in Morocco to discuss ways to strengthen efforts to curb emissions and keep global warming from exceeding 2°C, the threshold agreed on last year in the landmark Paris accord. Global temperatures have already risen by 1.6°F (0.9°C) since 1900.

Over the past 30 years, the agency said, October temperatures have been rising by 0.65°F (0.43°C) per decade, faster than any other month except September.

The month capped off the second hottest year-to-date, which came in at 2.8°F (1.6°C) above average and behind only 2012. If November and December have average temperatures, 2016 will tie for the second-warmest year on record, Chris Fenimore, a physical scientist with NOAA’s National Center for Environmental Information, said. Both months would have to be record warm to beat out 2012, he said.

November has already been off to a relatively toasty start, thanks to a high pressure ridge that sent temperatures soaring up to 20°F (11°C) above normal in the central and southern parts of the country from Halloween through the first few days of the month.

Those high temperatures have helped allow drought to flourish in the Northeast and Southeast, as they increase the amount of evaporation from soils and transpiration from trees. The heat and drought have also altered the timing and intensity of the fall leaf season and helped fuel unusually high wildfire activity in the Southeast.

Outside of the contiguous U.S., Alaska has continued to see stunningly high temperatures: For the year-to-date, the state’s average temperature is running 6.7°F (3.7°C) above normal and 2.5°F (1.4°C) above the previous record of 1926.

Warmest October of record at #Barrow, average temperature 30.1F. Every Oct since 2001 has been significantly above long term average #akwx pic.twitter.com/POtOshzzQZ

“Alaska's warmth is a result of a strong and persistent ridge that is deflecting the storms into the Northwest U.S., which in turn is advecting warm air from the south into Alaska,” Fenimore said in an email. “This ridging is also contributing to Alaska having its driest October on record.”

One of the hallmarks of global warming is that the cooler times of day and year warm faster than the warmer ones. During October, the average nighttime lows for the contiguous U.S. were 4.8°F (2.7°C) above the 20th century average, while daytime highs were 3.1°F (1.7°C) higher.

NOAA’s seasonal forecasters have predicted that warmer and drier weather is more likely to be in store for the southern half of the country through the winter, which will likely cement 2016 as the second hottest year and further inflame drought in some areas, particularly the Southeast.

You May Also Like:
‘Critical Moment’ as UN Climate Talks Resume
The World Isn’t Doing Enough to Slow Climate Change