US Not On Track To Meet Renewable Fuel Targets, Study Says 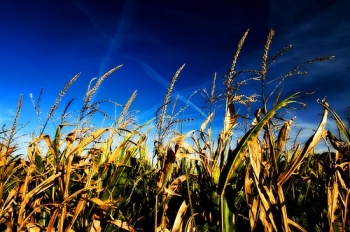 Ethanol made from corn stalks such as these have comprised the bulk of renewable transportation fuels used in the U.S. to date. Credit flickr/MarS.

It’s the beginning of a new year, and whether you knew it or not, the country has committed to a New Year’s Resolution: use more renewable transportation fuels. But according to a new study from Purdue University, unless the United States stops relying exclusively on ethanol to meet its renewable fuels quota — and instead develops biofuels that more closely resemble gasoline — or builds new infrastructure to vastly increase the amount of ethanol that can be burned each year, it won’t be able to meet its future fuel goals.

— be comprised of a growing proportion of renewable fuels. According to the Renewable Fuel Standard (RFS), which is regulated by the U.S. Environmental Protection Agency (EPA), in 2011, nearly 14 billion gallons of biofuel are supposed to go into our vehicle fleet, and by 2022, the law calls for an increase to 36 billion gallons. The goal of the RFS is to steadily increase the amount of renewable fuels burned in American cars and trucks, and to encourage the growth of the domestic renewable fuels industry, thereby improving energy security.

Currently, the major portion of this quota is met by adding corn-based ethanol to gasoline, but researchers say that the U.S. is nearing its limit of how much ethanol it can use with its existing technology.

“The key point is that we’ve reached a wall, so we can’t place any more ethanol into our system,” says Wallace Tyner, an agricultural economist from Purdue University. “It’s not because it can’t be produced, but because there isn’t anywhere to put it.”

In a new paper in the American Journal of Agricultural Economics, Tyner and his colleagues argue that the U.S. is already producing more corn-based ethanol than it can use. More corn-based ethanol isn’t going to help increase the use of renewable fuels, Tyner says. What is needed are changes to America’s vehicle fleet and, more importantly, improved technology to make available biofuels that are much more similar to gasoline than ethanol is. 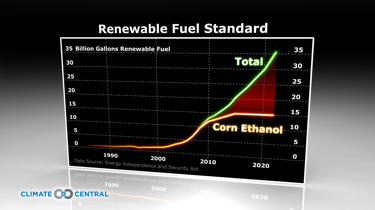 Since 2007, the U.S. has met its RFS targets mainly by burning corn ethanol. After 2015, the contribution of corn ethanol to RFS targets cannot exceed 15 billion gallons per year, and the alternate categories will have to make up the difference.

In recent years, corn-derived ethanol, a biofuel produced through the fermentation of sugar in corn kernels, has been the preferred choice to help meet the growing demand for renewable fuels. The country already has an established corn-ethanol industry and since the late 1970s, ethanol has been added in small portions to U.S. gasoline. Ethanol was originally added to gasoline as an oxygenate to help cars burn gasoline more cleanly. With today's improved engines, however, oxygenates are much less needed and ethanol is primarily added to reduce the proportion of fossil fuels used in cars. Overall, this helps reduce the amount of oil the country imports, and also decreases greenhouse gas emissions associated with driving.

Today most gas stations in America pump gasoline that is a mixture of about 10 percent ethanol and 90 percent gasoline, a blend known as E10. The amount of ethanol is limited to 10 percent, however, because many older cars have engine parts that aren’t compatible with a higher blend of ethanol.

With E10 fuel already distributed nationwide, Tyner says there isn’t room to bring more ethanol into the market. In fact, the U.S. already produces more ethanol than it needs to create E10 fuel. For example, in 2009 more than two billion gallons of ethanol production capacity was shut down because of a lack of demand.

“The bottom line is that ethanol cannot be the only biofuel in the U.S. market given the current [E10] blend levels,” says Tyner.

One way to bring in more renewable fuels is to increase the amount of ethanol that is mixed with gasoline. With fewer and fewer older model cars on the road, the ethanol percentage could increase to 15 percent, or E15, and be used in most new vehicles without requiring engine adjustments. In fact, in October 2010, the EPA approved the use of E15 fuel in cars, vans, SUVs and small trucks that are newer than 2007 models, and depending on the outcome of ongoing Energy Department testing, all 2001 and newer car models could soon be approved as well.

Yet, Tyner found that switching the U.S. to an E15 blend won’t help the country reach its long-term renewable transportation fuel goals. “The higher blend limit essentially buys us a bit more time, but it doesn’t make the problem go away,” he explains.

Higher ethanol fuel blends also exist and could be used to help increase the volume of renewable fuels. Vehicles with flex-fuel engines, for instance, can run on E85 fuel made up of 85 percent ethanol, but there are only about seven million of these cars on the road nationwide, and Tyner calculates that number would need to increase to over 90 million by 2022 in order to meet the RFS goals.

The rollout of more flex-fuel vehicles in the U.S. is not the primary restriction facing a shift to E85 blended fuel, however.

In fact, the cost of producing, and consequently purchasing, a fuel-flex car is nearly identical to a regular car, says Tyner, so bringing these vehicles to consumers is not the major restriction facing a shift to E85 blended fuel. Auto manufacturer General Motors (GM) is planning for almost half of its 2012 fleet to be equipped to run on any ethanol blend of gasoline, including E85.

“Bringing in E85 fuel is one of the most affordable solutions available today,” says Mary Beth Stanek, the director of Federal Environment and Energy Regulatory Affairs at GM. Although GM has just brought an electric car to market, Stanek says that it will be a long time before gasoline-burning cars are off the road, if ever, and that in the meantime, flex-fuel cars are an ideal alternative.

But while car manufacturers like GM and Ford are already committed to bringing flex-fuel vehicles to consumers, the widespread use of E85 faces other hurdles.

“The real problem is the filling stations,” says Tyner, “because right now there are only about 2,100 gas stations in America, or about one percent, that dispense E85.”

Furthermore, the dollars-per-gallon cost of E85 fuel will need to be about 70 percent that of regular gasoline in order to offset the reduced mileage performance of ethanol fuels. With the current high prices of corn, and consequently ethanol, he says it will be difficult to bring the cost of E85 below regular blends soon. 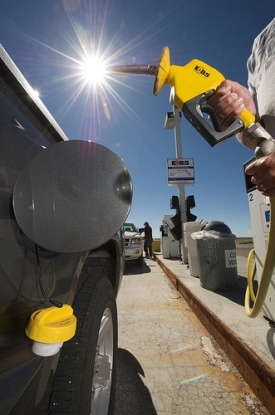 Flex-fuel cars can run on a blend of 85 percent ethanol and 15 percent gasoline, known as “E85” fuel.

The more likely scenario for increasing America’s renewable fuel quotient, according to Tyner, is to improve the biofuels that more closely resemble fossil fuels. Researchers are currently trying to develop technology whereby woody plants and grasses can be converted to such biofuels, and annual RFS targets have special categories for these new fuels.

These more advanced biofuels, like those derived from cellulose and other plant waste products, have the advantage over corn ethanol of producing fewer greenhouse gas emissions overall and requiring less energy to produce. They also share similar properties with the petroleum-derived fuels we already use, which make them advantageous to corn-based ethanol.

“There’s a lot of logistical advantages to this,” Tyner says, “because they can be shipped in pipelines and used like regular petroleum fuels.” They can effectively be “dropped into existing infrastructure,” he says. Any gas station in America can dispense these fuels with its existing pumps, and any car that runs on gasoline can run on these fuels.

The difficulty with these new biofuels is that they aren’t yet produced on a large enough scale to make them a reasonable or affordable alternative to regular gasoline.

In fact, in 2009 and 2010, the EPA waived the RFS requirements for cellulosic biofuels because there were so few manufacturing plants capable of producing them.

According to GM's Stanek, the biggest barrier to increasing production of advanced biofuels is the lack of investment and start-up money for the small companies researching them. “It’s not necessarily problems in the technology,” she says. “Now it’s a problem of scalability.” In other words, Stanek says there simply isn’t enough money available to companies to improve and increase their manufacture of advanced biofuels.

Tyner agrees, saying that the recent economic downturn has undoubtedly slowed the introduction of more advanced biofuels, and he anticipates the effect will be somewhat long-lasting. “I don’t think we’re going to see any commercial production for a few years yet,” says Tyner. On the other hand, he says that with enough investment in research, the use of drop-in replacement cellulosic biofuels could eventually help the U.S. meet the RFS goals for 2022.