The U.S. led the world last year in producing both oil and gas, federal government estimates published Monday show, even as the country committed to cutting greenhouse gas emissions. 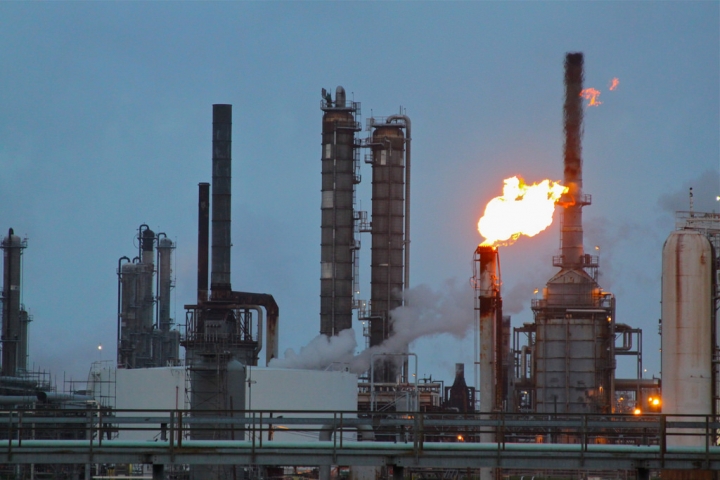 Thanks to the fracking boom, which unlocked previously hard-to-reach shale oil and gas, the U.S. surpassed Saudi Arabia and Russia to become the world’s leading producer of oil in 2013. The U.S. became the top natural gas producer in 2011, and has led the world in both oil and gas production together for four years in a row.

As oil prices remain low, U.S. oil production is expected to decline slightly in 2016 and 2017, falling to about 14.5 million barrels per day, the estimates show. U.S. Energy Information Administration analyst Linda Doman said the decline is not likely to mark 2015 as an all-time peak in U.S. oil production, which could pick up if and when oil prices climb again.

The uptick in crude production last year came as the U.S. helped strike the Paris Climate Agreement, which aims to keep global warming from exceeding 2º C (3.6º F) above pre-industrial levels. The Obama administration also killed the Keystone XL Pipeline last year, partly because the oil it would carry would worsen climate change.

Climate scientists say U.S. oil and gas production trends and the administration’s “all of the above” energy strategy, which includes encouraging fossil fuels and renewables production, don’t square well with its climate policy. 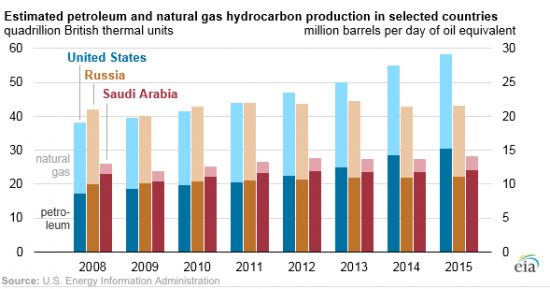 “The U.S. can lead the world in both climate action and crude oil production, but not for long,” said Jonathan Koomey, a research fellow at the Steyer-Taylor Center for Energy Policy and Finance at Stanford University. “To preserve a stable climate we need to phase out fossil fuel consumption as fast as possible, starting as soon as possible. This is why the administration's ‘all of the above’ energy strategy is incoherent. We have to stop building new fossil fuel infrastructure and start retiring existing infrastructure.”

The White House did not respond to a request for comment on Monday.

“It is necessary both for avoiding catastrophic climate change and retaining our international economic competitiveness,” he said. “The good news is that we’re moving in that direction, though — as we can see with these latest numbers — the benefits of very recent climate policies enacted under the Obama administration have yet to be fully realized.”

You May Also Like:
Global Warming Is Starving West Coast Waters of Oxygen
Stunning Cloud Maps Tell the Story of Life on Earth
Paris Pact Could Benefit From Halt of Fossil Fuel Leases