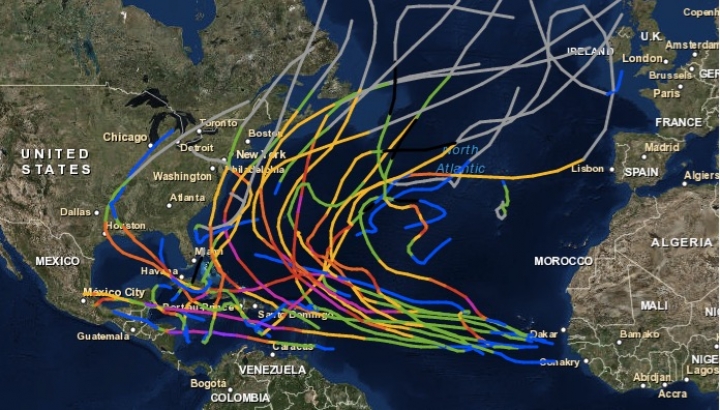 Category 3+ hurricane tracks from 2006-2013. No storm has made landfall in the U.S. as a Category 3 or greater since 2005.
Credit: NOAA Coastal Service Center

From water to your dating life, most droughts are tough. But in the case of major hurricanes, a dry spell can be a good thing. And the U.S. has been in one for nine years.

Every day that passes without a major hurricane hitting the U.S. stretches the current record-setting hurricane drought just a bit further. The last major hurricane — defined as a Category 3 or greater — to strike the U.S. was Hurricane Wilma, which made landfall in Florida in October 2005.

Just how odd is that? According to new research, a drought of this length would occur on average only once every 177 years. Prior to the current stretch, the longest period without a major storm making landfall in the U.S. spanned 8 years from 1861-68.

The researchers, who published their findings in Geophysical Research Letters, analyzed data going back to 1851. To make their findings more robust, they also ran computer simulations to create a 63,000-year set of Atlantic hurricane seasons.

There’s no sign that the current dry spell is the start of a longer hurricane-free period in the U.S. Instead, according to the new findings, “the admittedly unusual nine-year U.S. Category 3+ landfall drought is a matter of luck.”

While the U.S. has enjoyed a lucky streak, other countries in the Atlantic basin have suffered. Cuba has seen five Category 3 or greater storms hit it since 2005, which the new study notes is “well above its long-term rate.”

Then there’s also the matter of what forecasters consider a “major” hurricane. The Saffir-Simpson scale is what’s commonly used to measure hurricane intensity and is based solely on wind speed.

“The whole Saffir-Simpson scale is an arbitrary convenience scale that allows us to talk about one aspect of storms,” Timothy Hall, a hurricane researcher at NASA Goddard Institute for Space Studies, said. “No one would ever say wind speed alone is the sole source of damage. Sandy and Katrina are examples of that.” 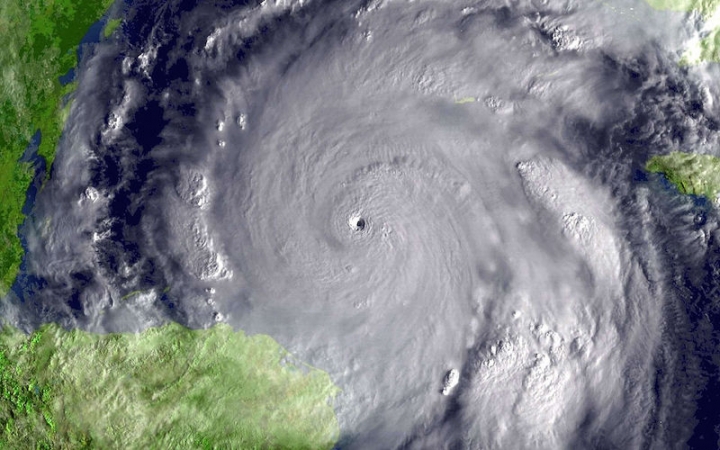 Satellite view of Hurricane Wilma, the last major storm to make landfall in the U.S. in October 2005.
Credit: NOAA/Wikipedia

Sandy made landfall in October 2012 as an extratropical storm, a type of storm with a cold core as opposed to a warm one, and not a hurricane. Even by hurricane standards, Sandy only had Category 1 winds at the time it made landfall. That didn’t stop the storm from inflicting $67 billion damage along the Eastern Seaboard. Equally “minor” Hurricane Irene made landfall in 2011, but still cost $14 billion mostly due to heavy rain and inland flooding in New York, Vermont and Massachusetts.

However, Hall, who co-authored the study with re-insurance industry scientist Kelly Hereid, said wind speed is a key metric for insurance and re-insurance companies in terms of how they set premiums. And there are concerns that the current dearth of major storms has created a false sense of security for people living along the coast as well as in the insurance industry. Coastal communities have grown while insurance premiums have remained mostly stagnant or dropped, creating a potentially risky situation financially for insurance and re-insurance companies if a major hurricane causes outsize damage.

“If the financial tools we’ve come to expect aren’t sufficient to cover the losses, then we could be worse off than before,” Hall said.

Early forecasts indicate this year will be a quieter than normal Atlantic hurricane season, thanks in part to the lingering El Niño, which can help curtail the formation of storms. However, it only takes one hurricane  to make an impact, no matter what the odds.

You May Also Like:
Eyeballing Hurricane Sandy From Space to the Sea
Lack of Hurricane Warnings May Help Homeowners
Top 10 Videos of Recent Major Hurricanes to Hit the U.S.