Energy efficiency is a major component of the Obama administration’s climate policies, and data released this week show the federal government is beginning to lead by example by reducing its energy use to its lowest level since 1975.

Federal agencies, which represent about 1 percent of total U.S. energy consumption, have reduced their energy use by about 40 percent since 1975, and about 15 percent since 2010, according to U.S. Department of Energy data. That has led to a 13 percent drop in the federal government’s greenhouse gas emissions since 2010. 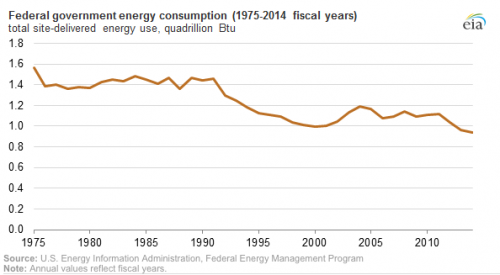 The Obama administration’s climate goal is to cut total U.S. greenhouse gases by up to 28 percent below 2005 levels by 2025, partly by reducing the government’s own energy use. In March, President Obama issued an executive order requiring government agencies to cut their emissions 40 percent under 2008 levels by 2025.

The federal government operates 360,000 buildings and a fleet of 650,000 vehicles nationwide. The Obama administration expects the measures it takes to reduce its greenhouse gas footprint to set an example for private industries.

“The federal government is helping to support industries that can lead to energy efficiency or renewables and providing those industries with more business can help them grow in the long run,” Energy Information Administration analyst Allen McFarland said.

The government’s energy use and emissions have fallen because more renewable energy is being used in its buildings and vehicle fleets. Many of its buildings are also becoming more efficient, reducing their energy intensity by about 2 percent annually since 2003.

Under Obama’s executive order, federal buildings will need to get 25 percent of their energy from renewables by 2025 and vehicle fleets are required to see a 30 percent decrease in their emissions. 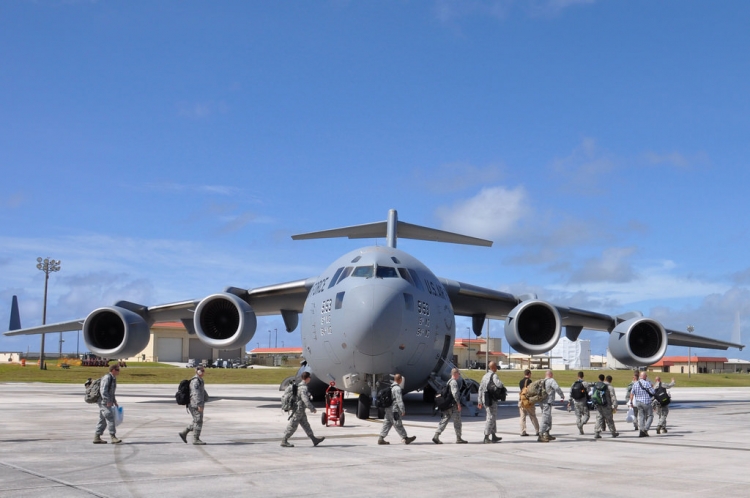 Lower jet fuel consumption by the U.S. military has driven the overall decline in federal government energy use since 2010.
Credit: U.S. Air Force/flickr

One of the biggest reasons for the government’s lower energy use is a reduction in the amount of of jet fuel used by the U.S. military.

The Department of Defense represents 78 percent of total energy use. The government’s jet fuel consumption dropped about 22 percent between 2010 and 2014, according to Energy Department data.

You May Also Like:
Rich and Poor Uniting in Paris, But Big Hurdles Remain
Global Warming Key Driver of 2015’s Record Heat
Where Cows and Coal Rule, So Does CO2