The U.S. Is Experiencing Its Third Warmest Year-to-Date

With a mild March following a record warm winter, the contiguous U.S. is experiencing its third warmest year-to-date in 135 years of record keeping, according to data released Wednesday by the National Oceanic and Atmospheric Administration. 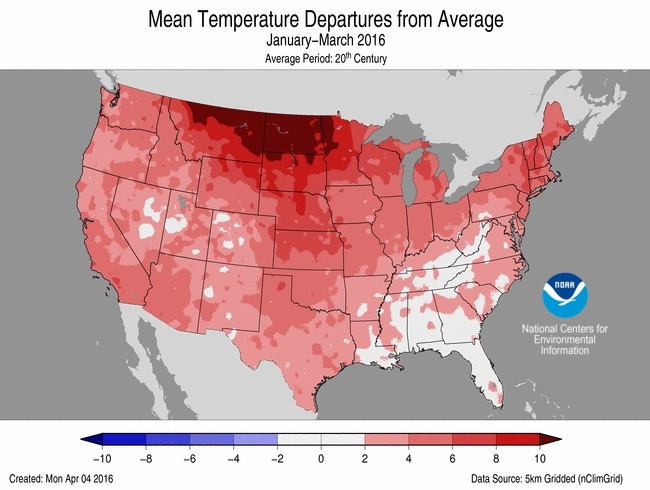 How temperatures across the U.S. differed from average during January-March 2016.
Credit: NOAA

The toasty conditions in the U.S. mirror those of the planet as a whole, which experienced its record warmest year-to-date by far through February. While a strong El Niño has given global temperatures a boost, the bulk of that heat comes from the manmade global warming driven by increasing amounts of carbon dioxide and other greenhouse gases in the atmosphere.

Global temperature data for March won’t be released until next week, but it is likely the warm streak will continue.

“The warmth during March was a continuation of what we saw during the winter months,” NOAA climatologist Jake Crouch said in an email. Such balmy winter weather isn’t unexpected during a strong El Niño, but winters are warming overall in the U.S. thanks to climate change.

Given the drop off in temperatures at the end of March that has continued into April, it’s likely that the year-to-date temperature for the contiguous U.S. will drop after this month, Crouch said. But nothing is certain, as NOAA’s Climate Prediction Center is expecting temperatures in the western states to heat up later this month, which could offset the cooler conditions in the East.

“It really depends on how the end of the month shapes up and how warm it gets in the West,” Crouch said.

One state has had a record warm year so far: Alaska was a sizable 11.9°F (6.6°C) above average for that period. Barrow, Juneau, and King Salmon were all record warm as well, and several spots set daily temperature records for March. On March 31, Klawock, in southeastern Alaska, hit 71°F, the warmest March temperature ever measured in the state.

Combined with a shifted winter storm track, the warm conditions have left parts of Alaska with very low snowpacks. Officials even had to import snow for parts of the famous Iditarod race.